Started a few years back after a conversation at Claymore by the Dixon Miniatures stand these Ninja are finally complete and can join the rest of their clan. 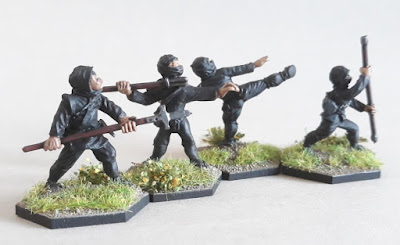 The trouble with these figures is there is not a lot to paint.  You would think that all black is the easiest colour scheme to paint, however, aside with achieving a good tonal representation of black; it is the little details that really make these figures work.

Without adding in really mad colours to lift the black hopefully the small details on bags, ropes and weapons will provide enough to highlight that there is more to painting black than actually painting black.

Hope that was of interest to you and there will be more completed figures in the near future.
Cheers for now
Posted by roma912 at 20:30 2 comments:

The last of the Hordes of the Things 15mm Undead army are now finished. The figures are from Alternative Armies range of 15mm Fantasy and have been enjoyable to paint over the last couple of years. 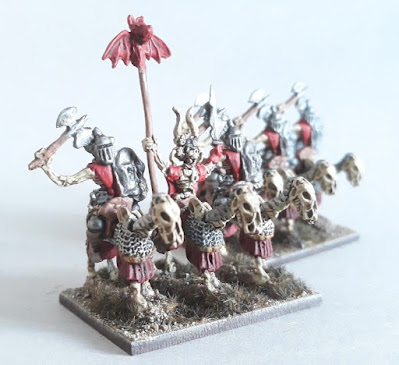 The mono pose with these figures does cause a little issue when basing as you need to consider both side of the base when positioning the figures or they won't line up correctly. 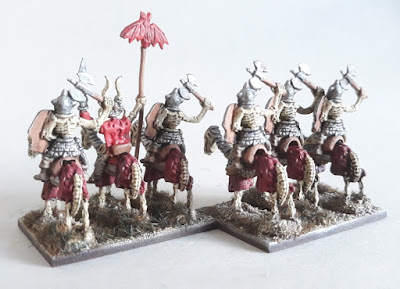 It is not the end of the world just a slight pain when gaming with the figures; whenever that maybe will be decided by the powers that be. 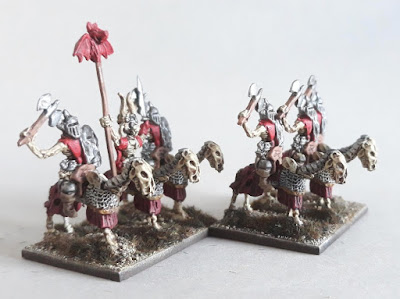 There has been a slight issue with the numbering of the "Fantasy Hero" posts and as such this is out of sequence from the previous post in this series. Again, not the end of the world and will revert back to order in the next post.
Hope that this has been of interest to you.
Cheers for now
Posted by roma912 at 20:30 2 comments:

In the previous Back to the Brushes post, Hun cavalry were mention being found underneath the Late Roman cavalry.
To say that there were surprised expletives used when the figures were counted would be an understatement.
The basis of a 1500 point WAB army was there, horses glued to stands, prepped and primed. Forty one cavalry in all plus sixteen skirmishers; there were tears in the corner of both eyes.
So what to do with them? Store, paint or sell are the main options. Storing takes no effort but achieves nothing. Painting takes the most effort and is the most rewarding once completed. Selling, is easy enough and can be financially rewarding if not tinged with regret.
So, painting it is and as it is well known that horses are my bete noire; then how to do it? 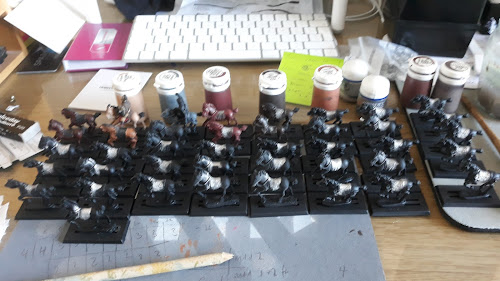 As one very large protect split into 8 colour sections. The Trello cards are drawn up and each colour has a variety of steps until based and completed sans rider. Why? Because painting horses is a bugbear here so deciding to take the stallion by the main and go for it. End date? Have notionally set the end of September for the horses and basing; the riders will be a separate project in their own right later in the year.
Will post updates on this as the project progresses.
Cheers for now.
Posted by roma912 at 20:30 3 comments:

The recently completed Analogue Hobbies Quarantine Challenge 2020 saw some progress being made with the Almohads and Moors in general.
First is a unit of heavy infantry that will form the basis of the centre line of the painted army with this being the first of either four or six stands for this. 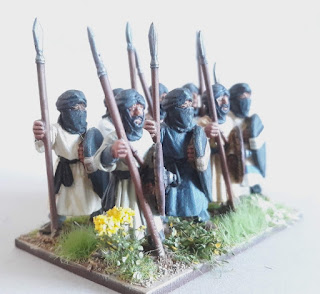 The figures are from Gripping Beast and are still some of my favourites for this period. 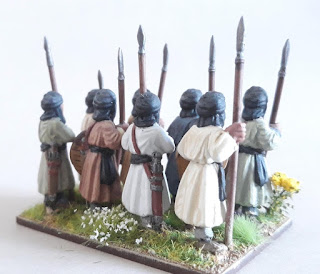 A common theme throughout the project is the use of a dark gray headdress to tie the units together. There is no other reason for this than artistic licence and it adds to the unity of all the units as well as the individuals on each stand. 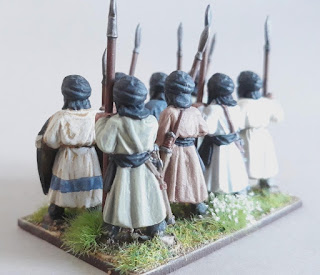 Next for this period is another command stand, the second of three needed for the army if used at 200 points. The figures again are from Gripping Beast and the standard from Little Big Men transfers. 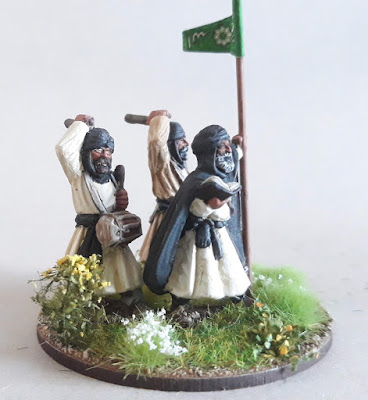 The drummer behind the left shoulder of the Iman was painted for this challenge, whilst the other two figures have been painted previously. 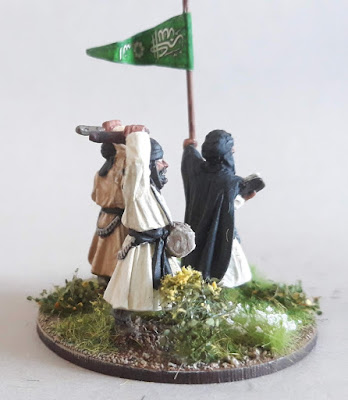 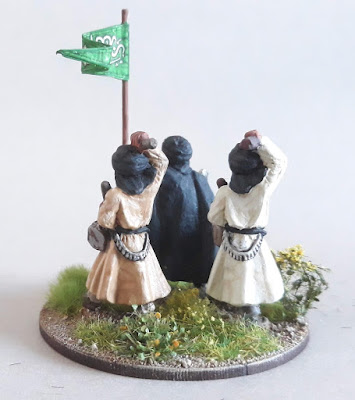 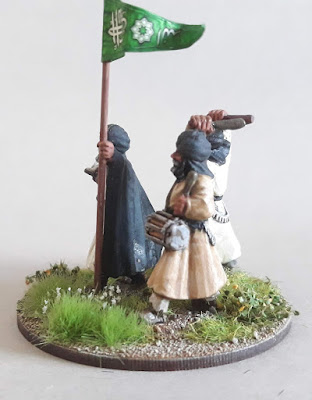 Here are both stands side by side. 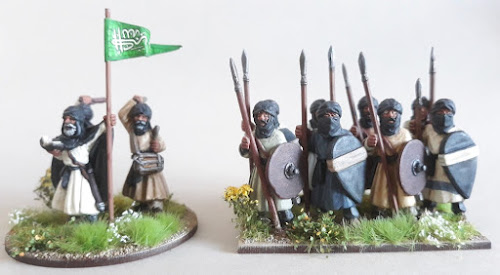 There will be some more from the last Challenge shortly before starting the first Thirty Days, Thirty Miniatures Challenges for the summer months.
Hope that you like these.
Cheers for now
Posted by roma912 at 20:30 4 comments:

To quote Bilbo Baggins "Don't adventures ever have an end? I suppose not. Someone else always has to carry on the story" Fairly sure that we can all relate to this in many different ways and 28mm Late Romans would be an example of this here.
When looking through army lists the other day for ADLG realised that the cataphracts from the previous Late Roman incarnation, that is Impetus and WAB had never been rebased. 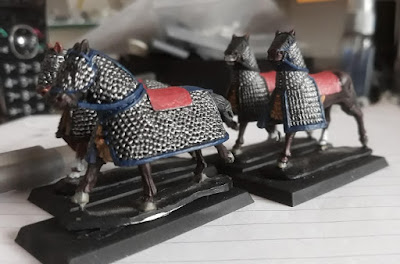 A trip to the loft was in order and behold the original unit of cataphracts from WAB partially painted and partially rebased on 60mm fronts. There were ten in the original unit only four of which have been completed, the others languish in states of un-readiness for gaming. 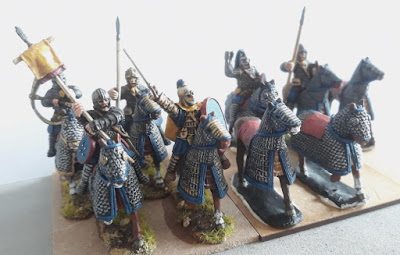 Imagine the surprize that raised the roof when another 14 cataphracts were found in the drawer below the above. Followed by the stunned silence that there were almost another thirty Late Roman and Romano British cavalry in the same drawer. 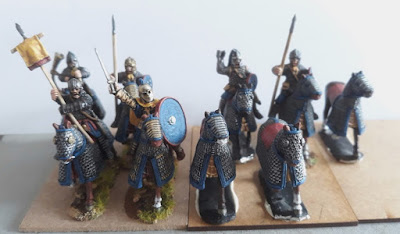 God knows why there are so many and god also knows how much painting cavalry is a chore to me. However, that said over the summer months there will be progress on the Late Roman cavalry as well as their ally and foe: the Huns.
Some armies are never truly finished painting and like Bilbo's adventure there are always more to carry on the story. Rest in peace, Sir Ian Holm, may the road go ever on. 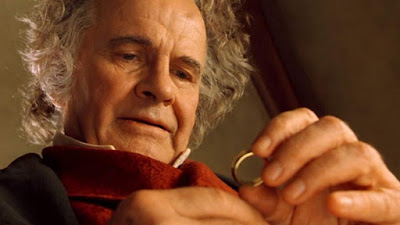 The Sunne in Splendour 3

Another couple of bases worth of Lancastrians for ADLG from Gladiator Miniatures painted over the last few months.

These have been painted to fit in with existing retinues from the DBA army completed in the AHPC X earlier this year. Originally Gladiator Miniatures then sold by Black Hat Miniatures and now available from Fighting 15s. The life cycle of a miniature is a varied thing as these came through eBay to here. 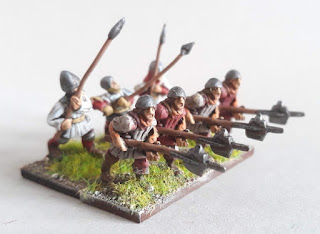 Horizontal bills and spears are a pain when it comes the gaming table however they do look the part. 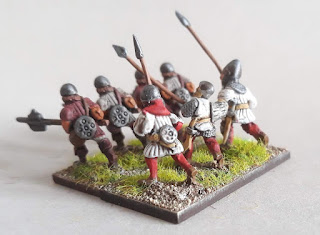 These have been lurking at the edges of the painting table for some time now so decided to finish them off during this challenge. 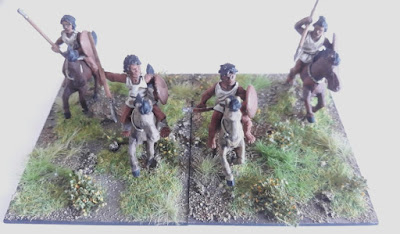 Yes, all the pictures were taken at the same time in the same light and yet the one above would appear to be on a grey base sheet rather than white, who knew. 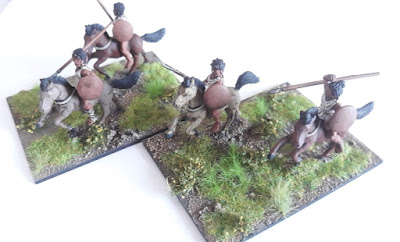 All of the light cavalry figures here are from Gripping Beast's Punic Wars range and are very versatile as they can be used in both sides and several others of the period including the Caesarian Romans. 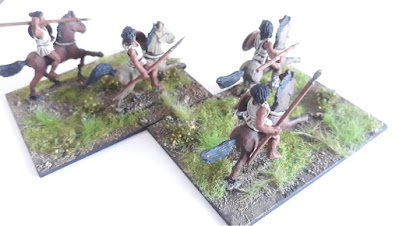 Might get a few more of these in the future although annoyingly they come in packs of three, meaning will need two packs for three stands. 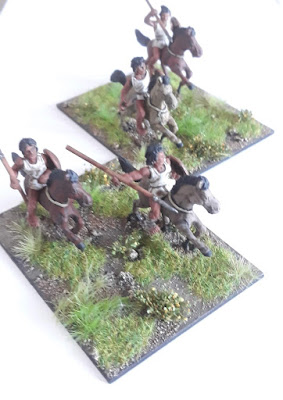 Think it is about time to go back to using the camera rather than the phone as these pics are washed out and fuzzy at time.

The skirmishers are also from Gripping Beast and could do with some support from javelin armed troops in ADLG. 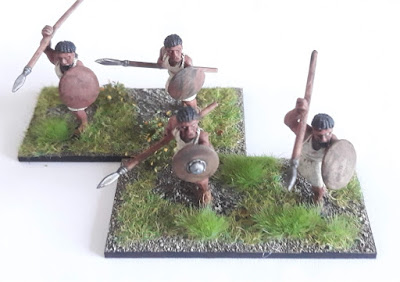 Both the cavalry and infantry are based on 60mm fronts although the cavalry are on 80mm deep bases. Prefer the deeper bases as this allows more staggering of the horses giving more movement. Also allows more figures to be on a base to differentiate between light, medium and heavy cavalry more easily. 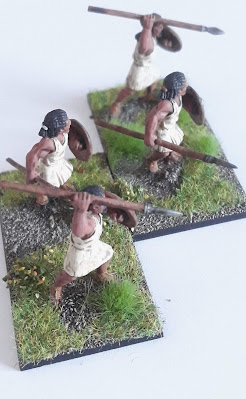 The 60mm fronts will also enable these to be used in other systems such as Hail Caesar and DBA. 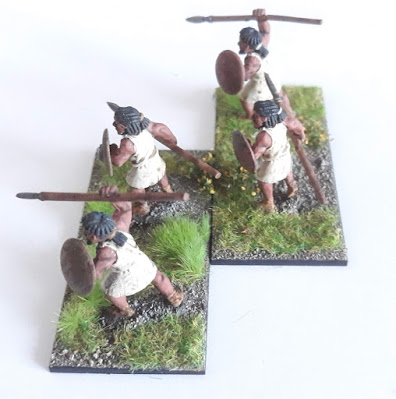