Ten days into the Thirty Spears Personal Challenge and the first ten are just about finished. Only the spears and shields remain to be painted and the shields will have to wait for the order from Little Big Men to be completed. A quick picture below shows the progress so far: 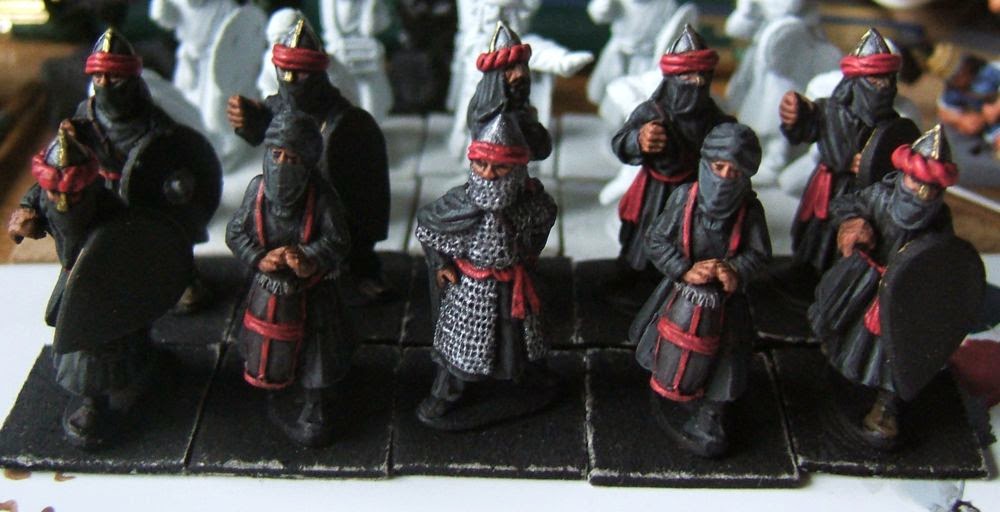 In white in the background are the next ten spear to be painted and these will be started tonight. That's all for just now.

Here are a few pictures from several of the games from Sunday's Impetus Tournament hosted by Falkirk District Wargames Club. Overall a good days gaming and a few surprizes through the day.

The two smaller commands fought off the Knights and their sergeants well, before with drawing. There were losses

The highlight of the game was the Protected Foot unit holding back the Commander in Chief on a flank charge for three rounds of combat before the game ended. This just should not have happened but the dice were kind when needed. 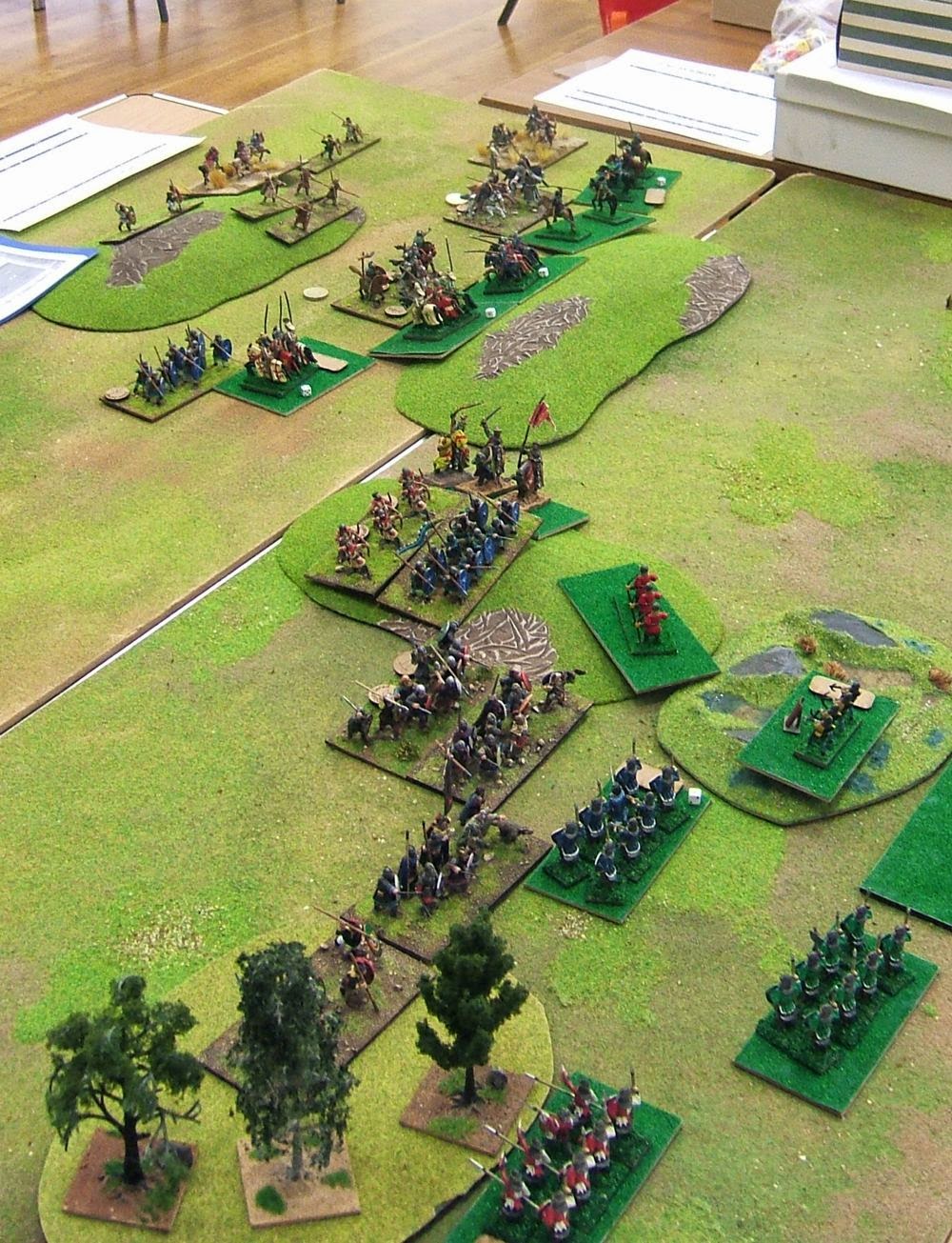 Overall the Late Romans faired better against the Feudal English than first expected. The game was a loss for the Romans but enjoyable all the same.

The second game against Late Samurai was also interesting resulting in a draw. The final game saw the Late Romans routed by the Lancastrians. Sadly there are no pictures from these two games and the final butchers bill is shown below. The results tell it all and the wooden spoon came home here.

Due to other commitments during the Analogue Painting Challenge - that is life and work - I fell short of the target that I had set myself. Whilst at the time I excepted this I have been reviewing a few things lately and due to there being a lot of chat about SAGA: Crescent and Cross and Gripping Beast's new plastic Arabs have decided to set myself a personal challenge. A quick recce to the Lead Mountain and a draft generic Moor and Arabic army was selected.

The challenge is simply really. Paint, base and complete thirty spearmen for a generic Moor and Arab Impetus army in as many days. That equates to three stands of ten. Simple really and it should be achievable.

Easter weekend saw a great start to this with the first stand of ten Black Guards being well under way. The figures shown are all from Gripping Beast. These will fit into the following armies Andalusians, Almoravids and Almohads as well as any generic Arab or Islamic style army of this period.

The first plan was to dip these figures but after checking them over and starting to paint them I have decided to paint them to my normal standard. Transfers from Little Big Men have been selected, ordered and will hopefully be here later this week.

Once the thirty spearmen have been completed I will select another element of the army to work on in a similar way.

Back to the Brushes 87

Pictured below is the start of another two points worth of Vikings for SAGA. This will complete the warband unless a levy unit is added in the future. Shown here are two figures from another Hird unit and one from another Bondi - he is on the left as you view this. 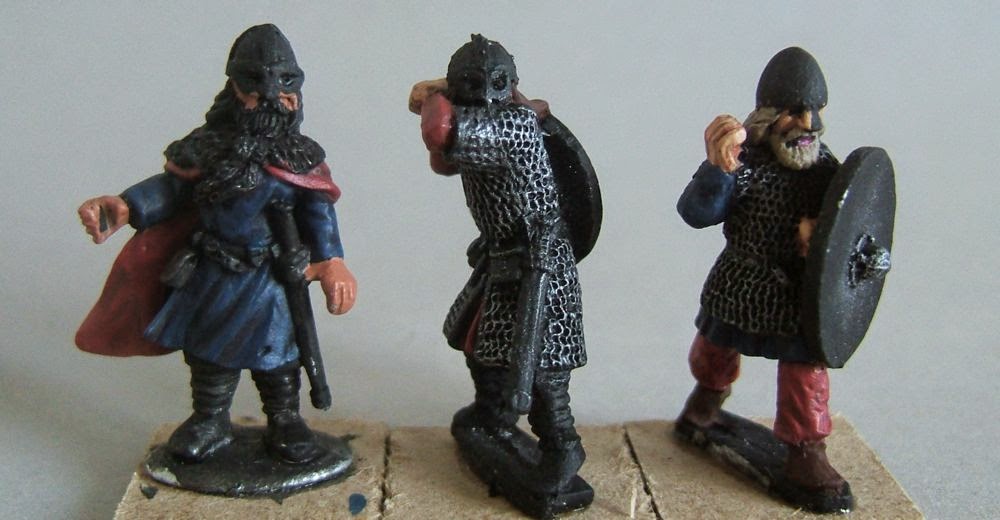 The figures are all from Gripping Beast and are painting up well so far. All of the Vikings used in SAGA are on twenty millimetre square bases as this allows them to be used in sabots for Impetus. More of these to follow shortly. 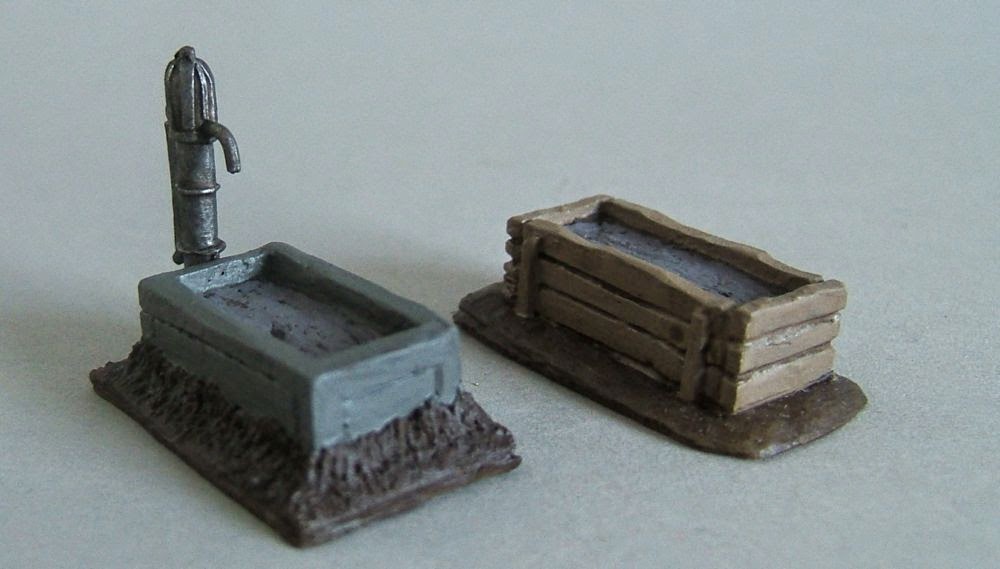 Above shows another two resin pieces of scenery from Hovels for Dead Man's Hand. Quick and easy to paint and suitable for a good many skirmish games.

Hope that you both find something of interest in these ramblings.

Next up is the start of something a little bit different. A personal challenge so to speak however; this will be fully explained in the next post.

Pictured below are a few small scenery bases that have been completed along side the previously shown Lawmen. The scenery pieces are resin casts from Hovels and have been lying in the attic for a good few years. 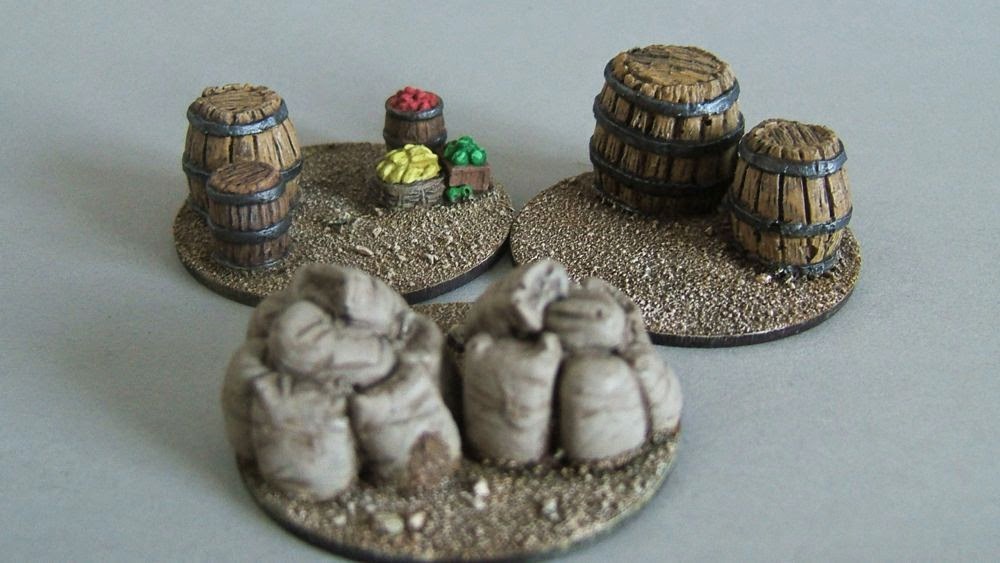 They were originally bought to be used for Mordheim or other similar skirmish games and are perfect for Dead Man's Hand.

There will be a few more to follow over the next few months.

Over the last few weeks there hasn't been time to paint and blog so I have concentrated on getting a few things completed. Here are the first of these with another offering from Artizan Design's Wild West range for Dead Man's Hand.

As with other figures from this range these have been great to paint. Excellent sculpts with well defined features and clear lines throughout. 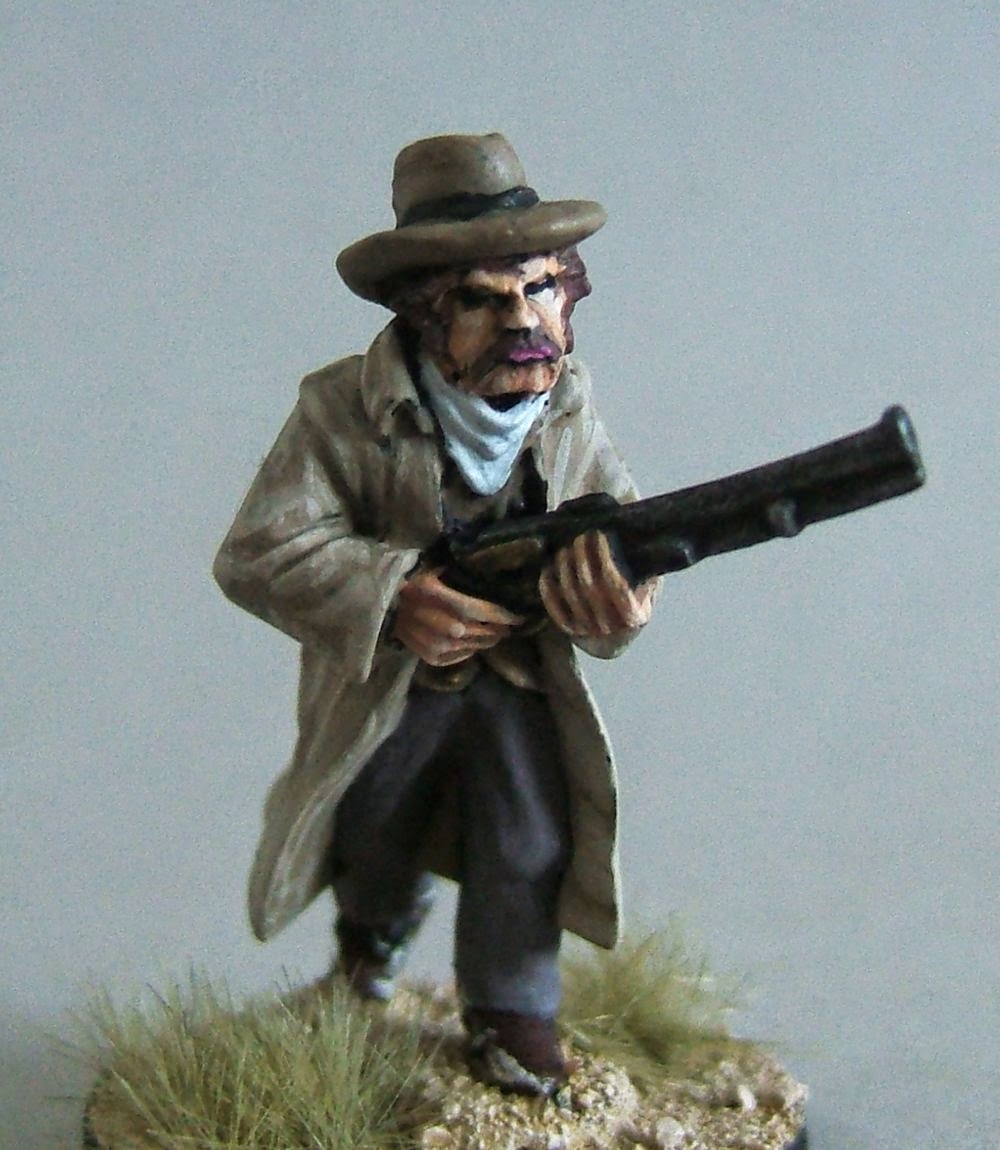 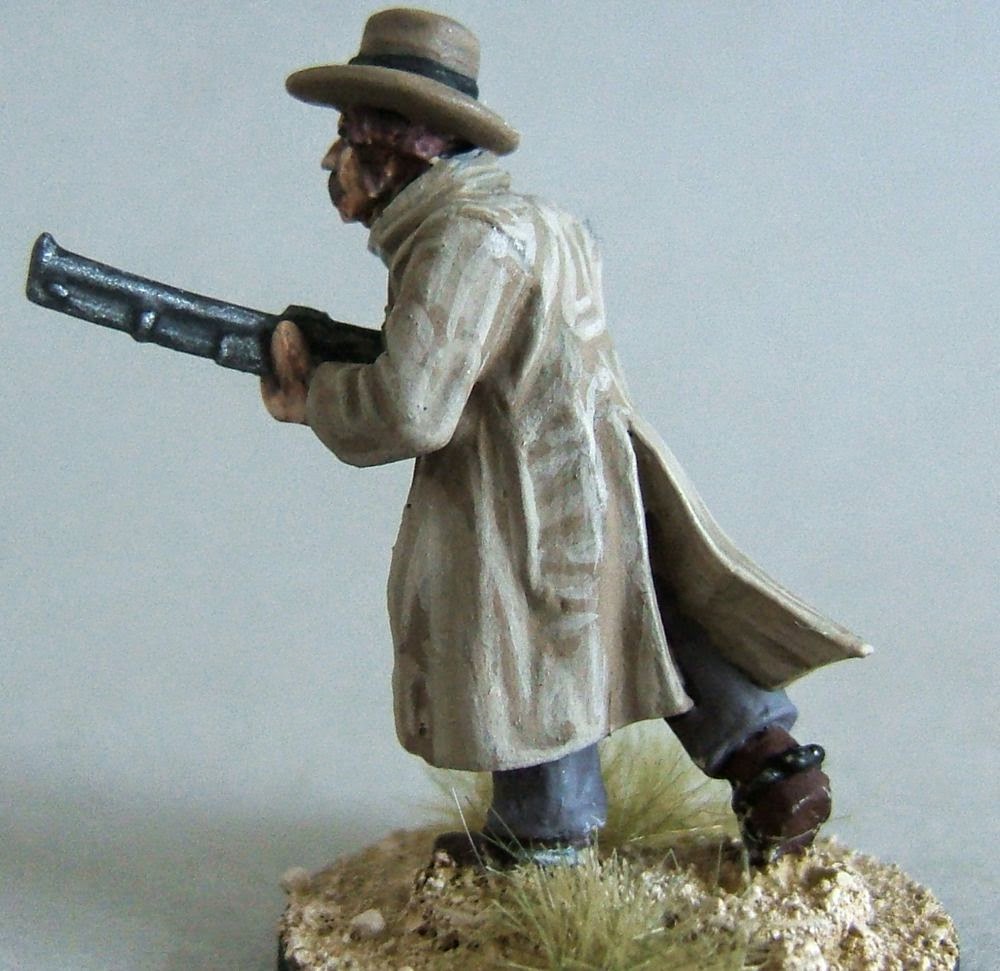 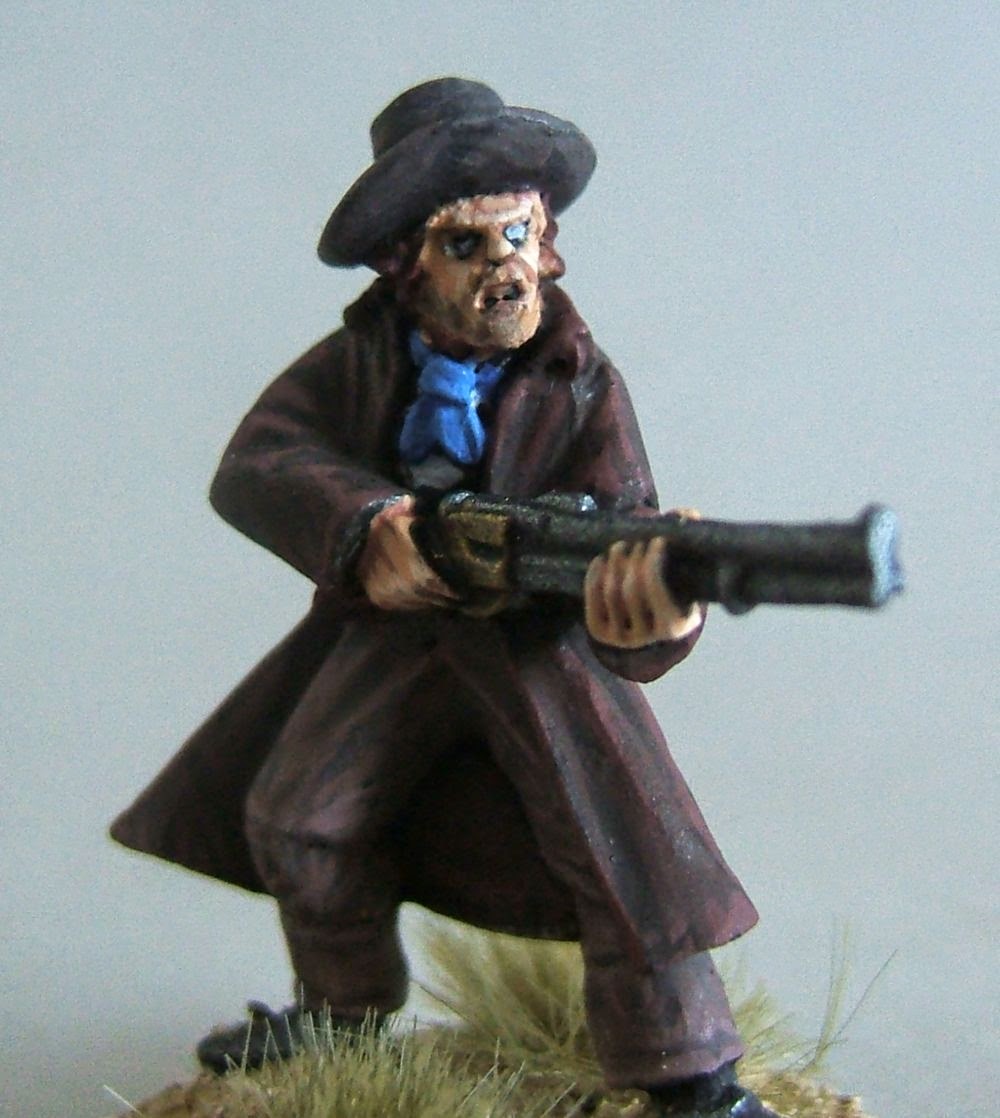 The left eye will really have to be touched up here. They say a camera never lies and this is poorly painted. 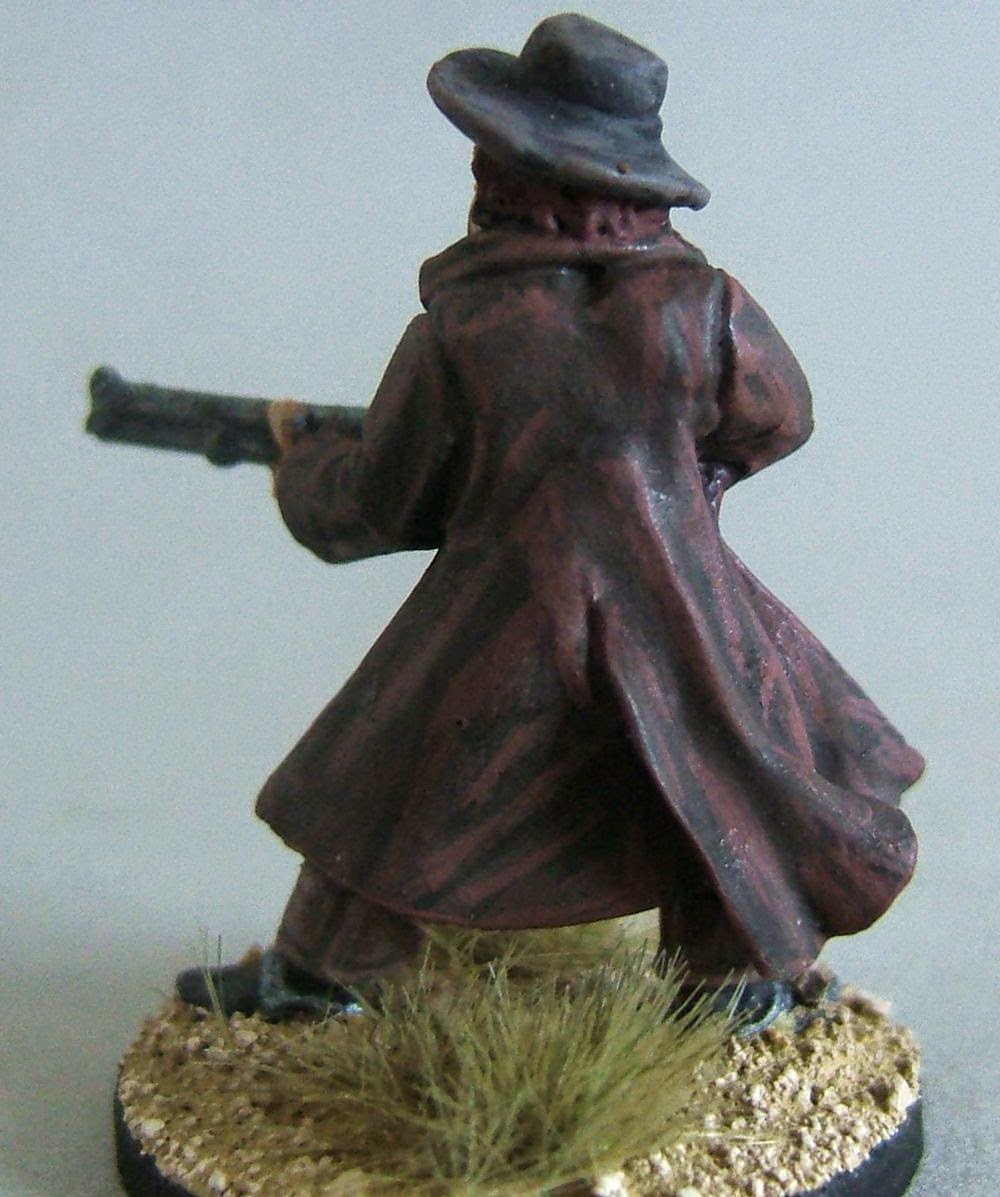 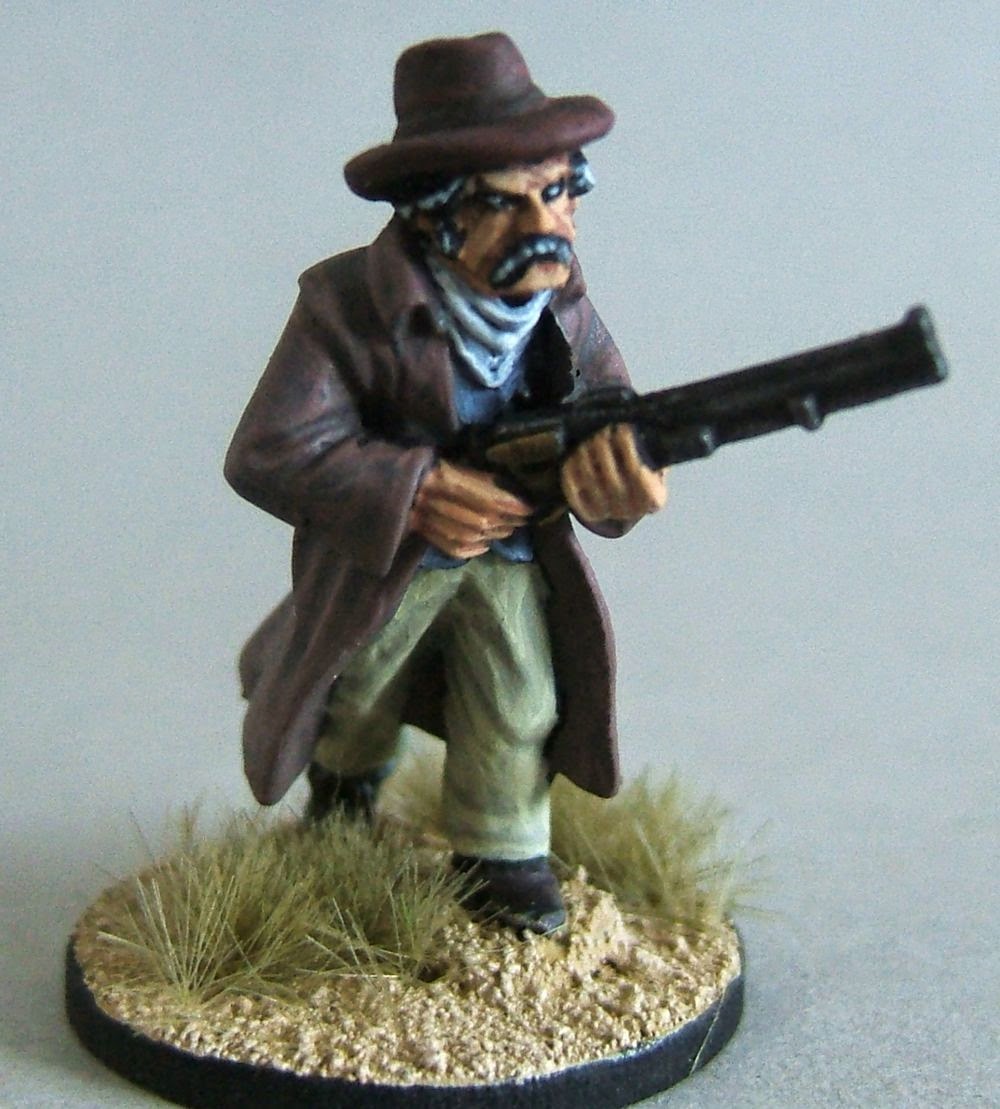 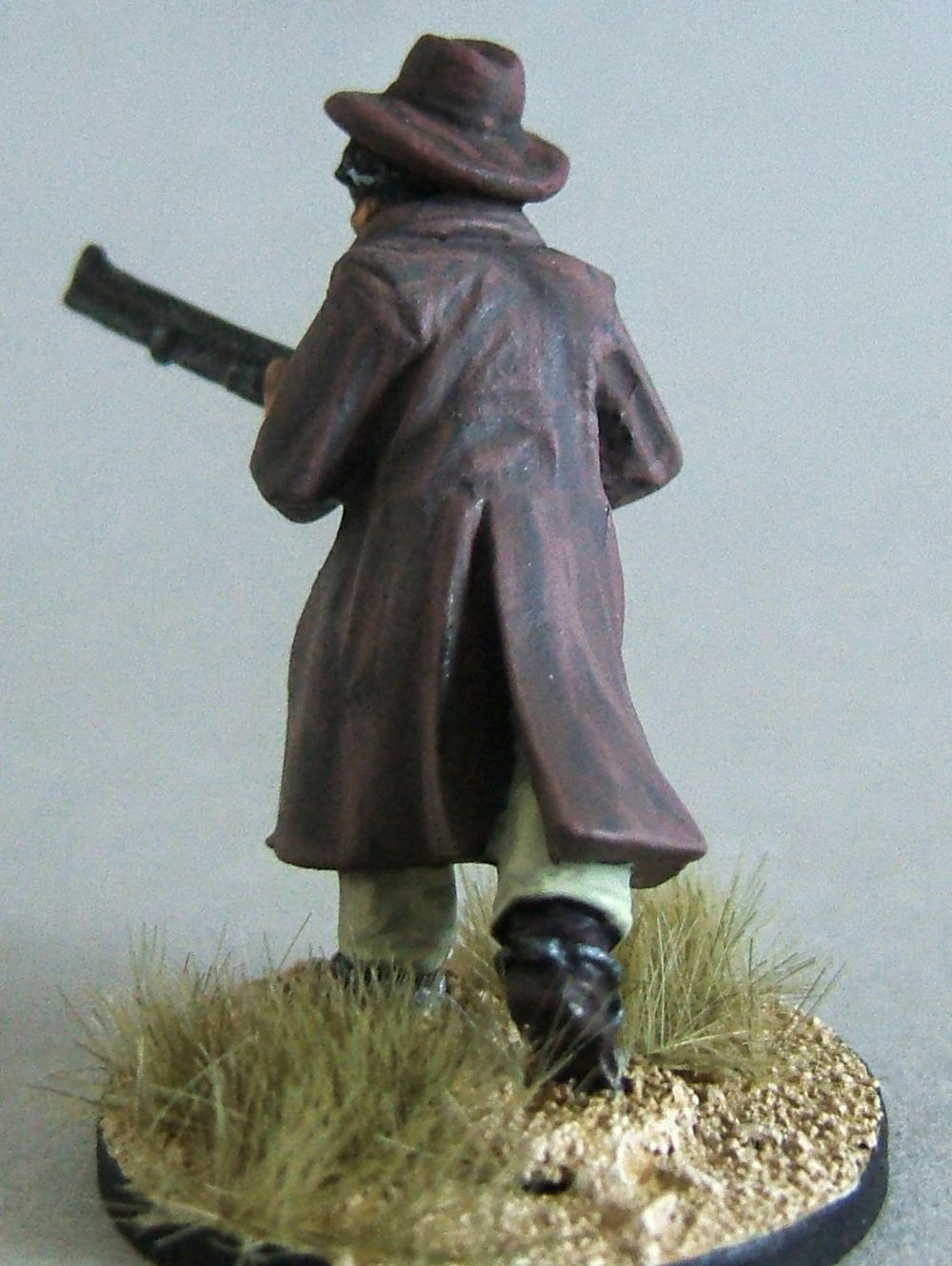 These figures pretty much complete the Lawman gang that has been painted over the last few months. This will allow some time for a few character figures to be added for more flavour in the future. 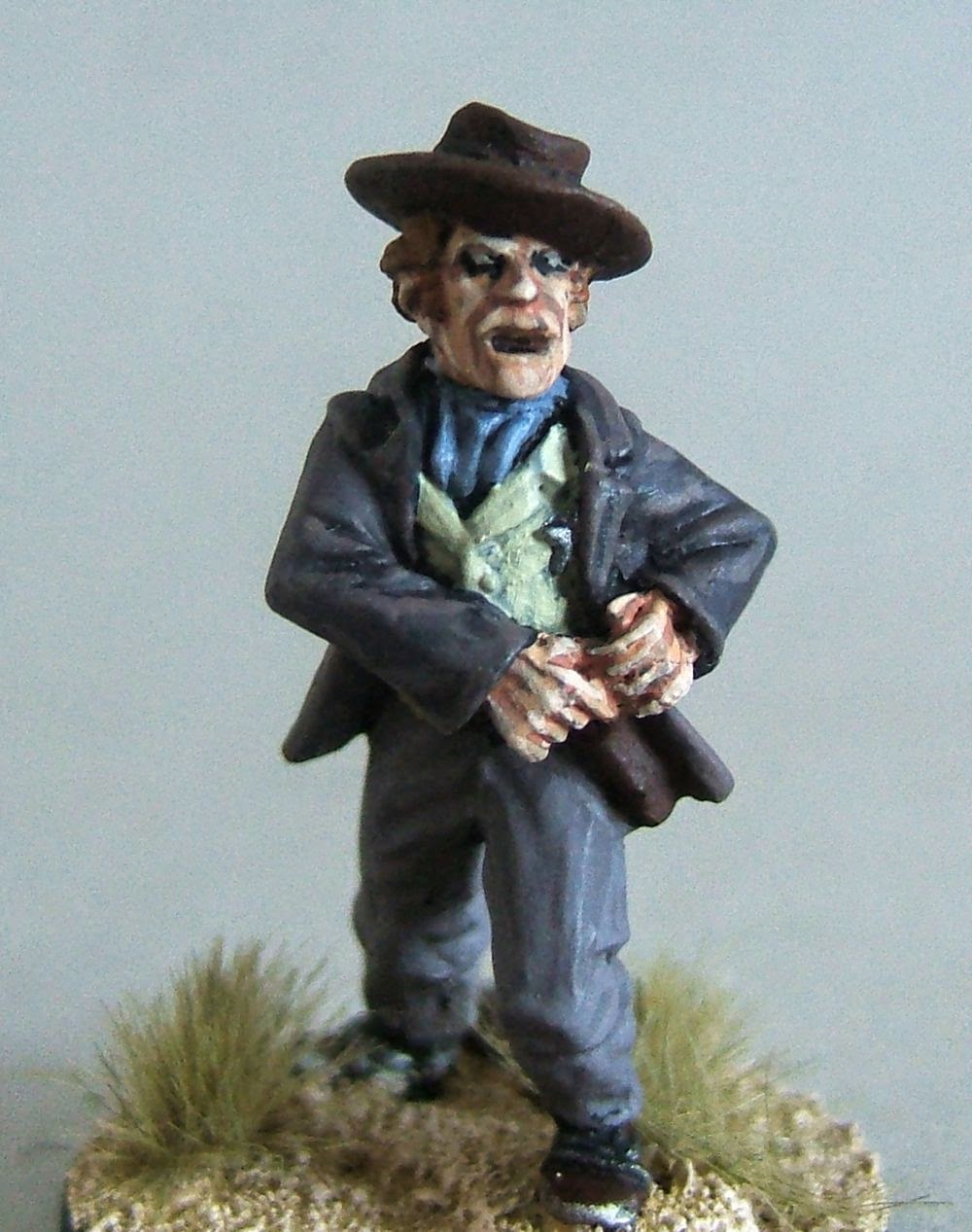 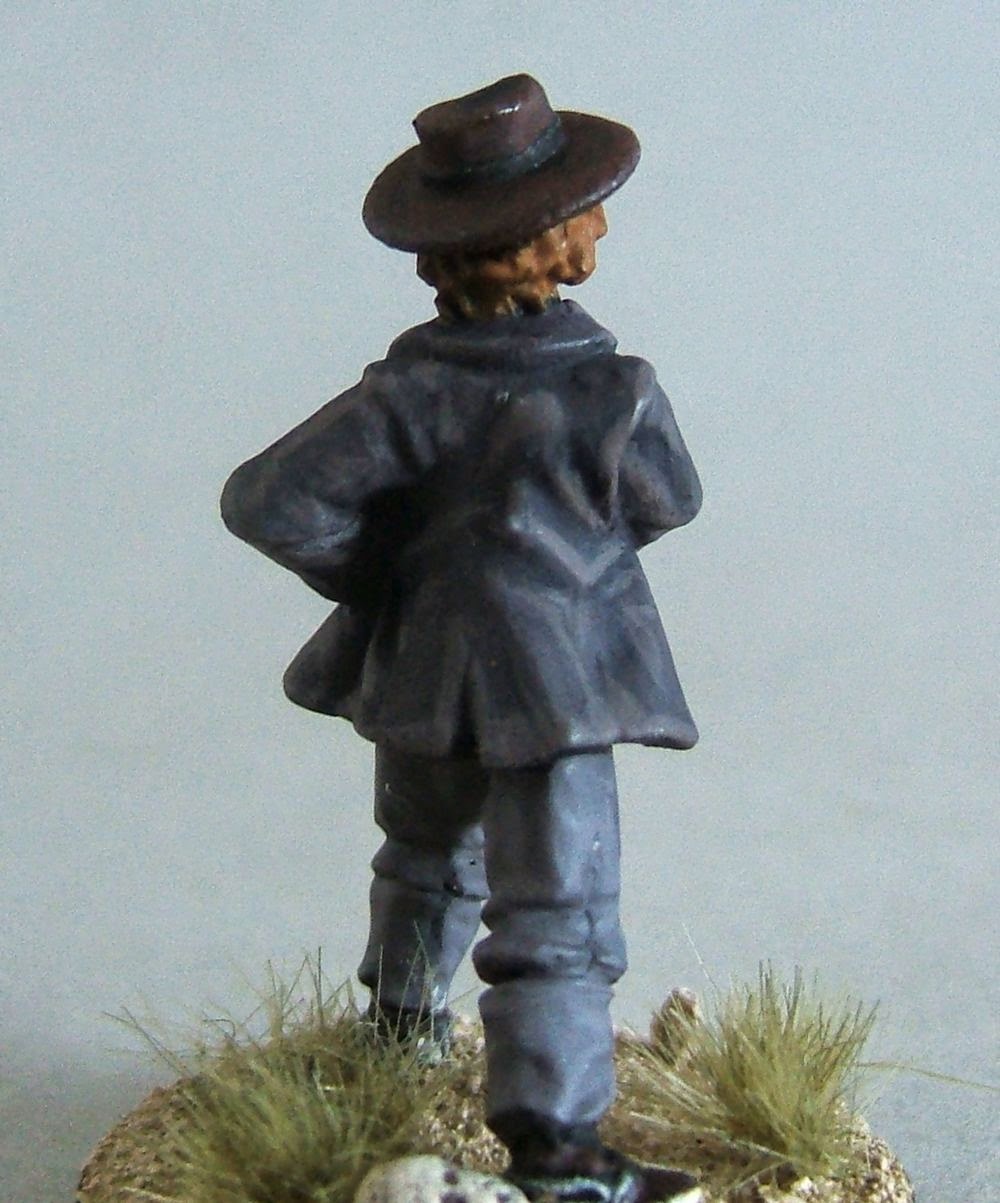 Next up some small scenery elements for Dead Man's Hand.

After a brief hiatus from blogging but not painting, normal updates will continue from tomorrow.