Back to the Brushes 41

The first pictures of another warband for Songs of Blades and Heroes, this time Ninja or just assassins clad in black. The figures from Dixon Miniatures have lots of character and whilst there may be some quibbles over sizes and proportions they will do the job grandly. 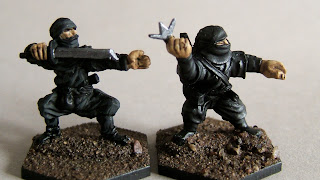 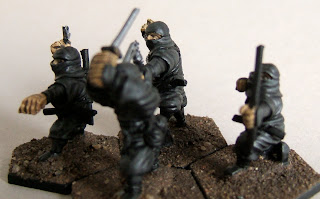 At present can't decide which way to go with the remaining figures so may mix them between the two different styles. All of the group above and below have been painted in the second style which is a bit slower. 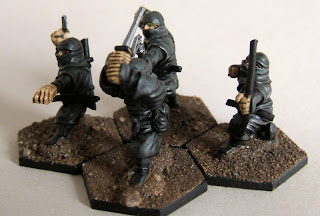 The great thing about these figures is they can - and will - be used for both historical and fantasy gaming.

The next post will have more from Troy and the Northlands.

Back to the Brushes 40

The last post promised something just that little bit different and given that Dwarves will be gracing many a gaming table in the coming weeks with the release of the Hobbit, Dwarves it is. 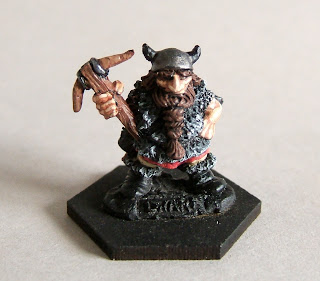 Both figures are from the Citadel pre-slotta ranges with the gent below from the Norse Dwarves and his more gaudily dressed companion is thought to come from the original range of Citadel Dwarves. The Norse Dwarf above has now been finished and the basing is setting before the last touches are added. 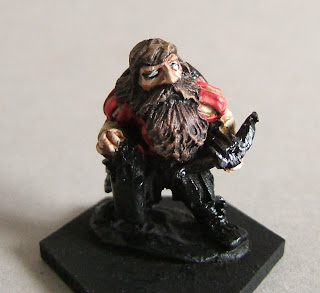 Hopefully this Dwarf will join his more taciturn friend above shortly allowing both to be used in the "Red Right Hand" Warband for Songs of Blades and Heroes. The inspiration for the warband came from the Nick Cave song of the same title. There are still a few to paint, including four dwarves, one halfing and a wizard to complete the travelling band of some reknown in certain circles. 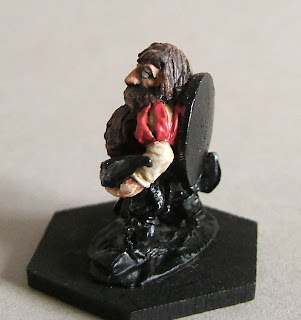 From Dwarves to Trolls, the first of a stand for Impetus Fantasticus. The thought here is to create a composite Orc army from a variety of different figure ranges to show the diversity of the species so to speak. Orcs, Goblins and Trolls vary from story to story and supplier to supplier. 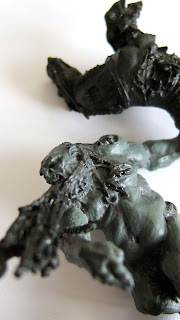 This beast comes from the superbly talented hands of Gamezone Miniatures and whilst not quite, Tom, Bert or Bill Huggins; the Cockney gents of the Troll world, it will fit nicely on the stand along side another of its destructive brethren. 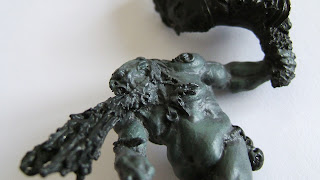 The second picture is to try and show a bit more detail. Have opted for a greenish grey for the flesh of these Trolls and will work the underside upto a lighter shade. Not really sure how to go about the dead horse yet but there is plenty of time to work on it.

The next post will have some more unusual figures but not from fantasy this time, although that depends on your point of view.

Back to the Brushes 39

Here are a few work in progress pictures of the base of Mycenaean Swordsmen that are gracing the painting table at present. 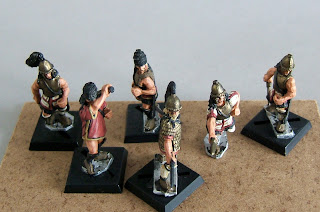 The finished army will contain several of these bases to help protect the flanks of the spearmen from more mobile types such as chariots and light foot. 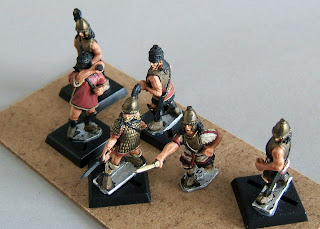 The figures are from Redoubt Miniatures and hopefully will look the part once completed with mixed figure of eight and round shields. 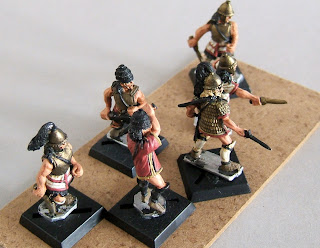 Have opted for only six figures on the base to try and capture the feel and movement of lighter armed troops of varied armament and protection. The other planned base of swordsmen will have a higher number of unarmoured figures to reflect this as well. 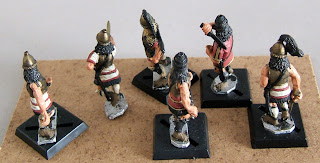 There will be more to follow from Troy soon as well as something just that little bit different.

Back to the Brushes 38

Have been slowly painting a Viking Warband for SAGA over the last year as well as an army for Impetus. Great figures to drop in and out of once in a while, however, this does mean that the projects are slow at the very least. Any way some work has been on going on these figures from Gripping Beast's newer range of Vikings 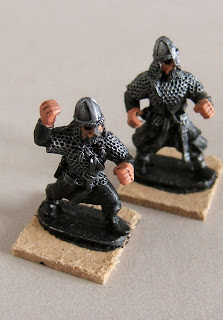 After these four figures are completed it will be on the Bondi for the warrior groups. All of the figures from the SAGA warband will also be used in the Impetus army by using sabot bases from Warbases. Not only will these bases save time and money but they may also mean the Vikings will see the table this decade. 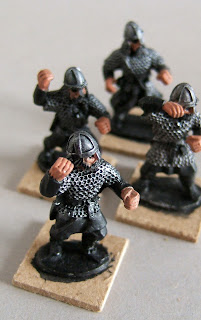 Below is yet another casualty figure that is nearing completion. This figure is from Old Glory and will hopefully be ready for basing later today. 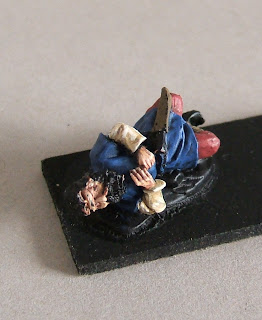 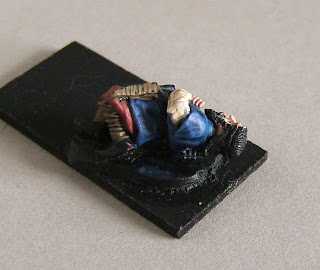 That's all for now

Fury of the Norse 3

A brief post for another casualty marker for Impetus or SAGA. The figure is from Old Glory and was enjoyable to paint. 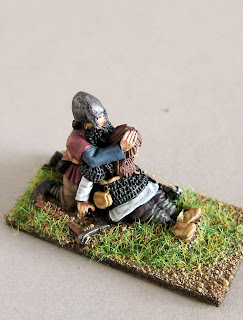 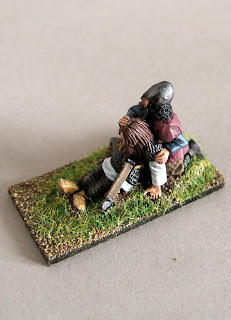 Thanks for joining and hopefully there will be something of interest here for you both. 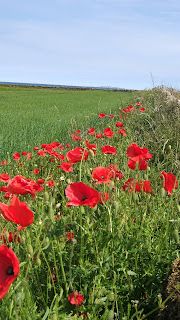 Here is the last squad of the first platoon of Late WWII Germans in 20mm for Disposable Heroes. the figures are from SHQ and have been fun to paint. 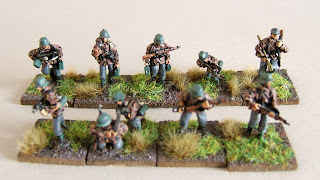 Have tried to create the impression of the camouflage on the tunics without going overboard and painting every single shape and colour in the pattern. The pictures are clickable so have a look and pass your own comments on them. Personally, rather pleased with the overall look. 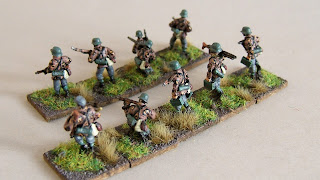 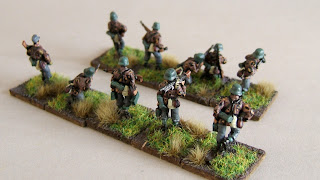 In comparison to some other ranges at this scale the SHQ figures are a bit slender but well proportioned and clearly sculpted. Worth looking into for small scale projects as the releases from Plastic Soldiers Company  and Warlord Games are making lead in this period redundant for larger projects. 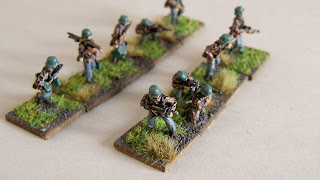 Next time the full platoon is in use will try and remember and take some more pictures of the whole group together. 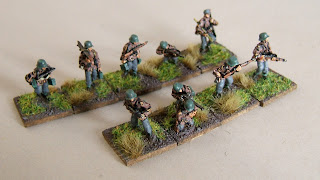 Next up from this era will be crew and anti-tank guns to support the above Grenadiers in their defence of the fatherland. Back to the Mycenaeans and Old Glory casualty markers for Impetus.

Back to the Brushes 37

After not painting for almost the last 6 weeks, something chunky and fast to paint was needed and what better than a Jagdpanther from Britannia Miniatures. This model has been gathering some dust on the underside of the painting desk for too many months now and a few games of Disposable Heroes made its selection prefect for starting back at the painting table. 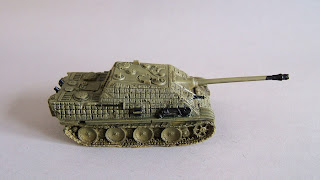 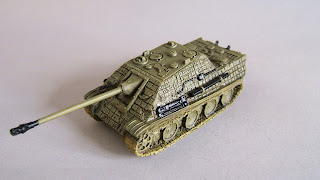 The model was spray undercoated in Dark Yellow from the Flames of War paints range and then heavily ink washed with a black and brown mix. At this stage it has only been dry brushed with Mid-stone from Vallejo before the decision is made as to whether or not it should have a camo pattern washed on. Any thoughts? 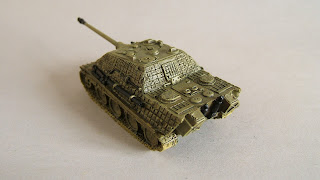 The tracks will be a combination of flat brown and gun metal as per previously painted German armour. This style of painting is rewarding on such a detailed model as this and the Britannia range still remains a firm favourite here. 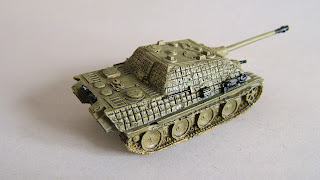 Painting this tank hunter has kicked started the painting again and there will soon be some Mycenaean Swordsmen gracing these pages as well as more from WWII. The inspiration for the Mycenaeans comes from the image below: 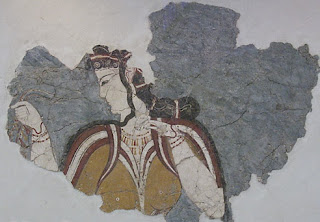 Some work in progress pictures to follow shortly. That is all for now so enjoy the fireworks if you are in the UK.