Progress on the Spartan cavalry and peltast bases has moved on slowly, very slowly to be honest. Hopefully work will resume at a slightly better pace in the near future.

A small purchase from Gripping Beast is moving towards its new home - just waiting on the postman arriving. They have become a rarity in the local area - but sightings have been confirmed. The package when it arrives will contain a command and line pack of Thorakites for the Late Macedonian army along with a few additional figures from the same range for variety in the cavalry bases.

A separate page outline the Basic Impetus armies for both the planned Macedonian armies has been added to the main page as well.

When there is more to show pictures and details will be posted as soon as possible.

Very brief today, so that all for now

Here are the WIP pictures of both the Spartan Cavalry and the Vikings: 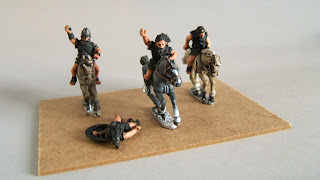 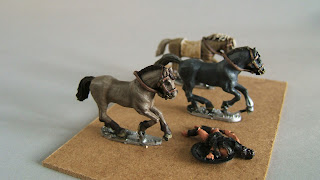 At present not one hundred percent sure of which rider will go on which horse.  Most likely, it will be the under armed figure as the central figure. This will put the armoured figures to the outside which will break the line up as well. This and the positioning of the spears will hopefully help create a bit of movement between the figures and the horses and draw the eye in to the casualty figure in the fore-ground.
The horses are painted from a method taken from the following article:
Horse Painting
This method provides good results in a reasonable time scale which will help for future projects which will contain more cavalry. The Macedonian armies for example both have 3 to 4 cavalry bases. The evil empire is good for somethings after all. 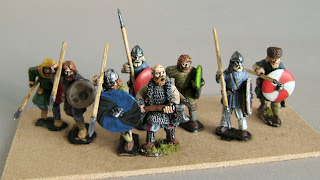 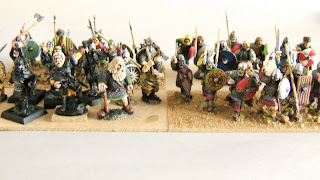 The Vikings are a mixture of Foundry Vikings and Gripping Beast figures taken from their Viking, Saxon and Rus ranges. The idea behind this is to create a non-uniform base where the common theme is Dark Age warriors with a range of styles of equipment shown to show variety achieved by successful raiding. Well that is the idea anyway.
The bases will be made up of varying numbers of figures from 8 to 10 and will be made up in a variety of ways to show line, shield-wall and wedge. This will hopefully help depict a less organised and disciplined army as opposed to a regimented phalanx based army.
Well that is all for now.
Cheers
Posted by roma912 at 12:52 No comments:

Thought this was posted the other day and here it wasn't. The jist of the original post refers to the following:

Spartan cavalry - horses now completed and working on the base. Looking at some limited water effects here to show slightly different terrain. The riders are started with the flesh colours being mostly completed.

Slingers and Peltasts - flesh blocked in, waiting for second and final highlights.

Snuck a unit of bondi in for the Basic Impetus Viking army which has been lurking around the painting table for a while. Still to texture and complete the base but so nearly there with this unit.

Well this should be fairly easy so starting at the beginning.

Finish the Spartans, which currently have 3 Allied Phalanx, 1 Peltast and 2 Cavalry bases to paint. That should be nice and easy. Both the Peltast and one cavalry unit are started, so going well there. Not setting any dates for the completion of this as its going to be a busy time with college work as well and that is really going to be the priority.

The original plan was to paint another hoplite army to face the Spartans based around the following description of the Battle of Mantinea from Thucydides:

Now their left wing consisted of the Sciritae, which amongst the Lacedaemonians have ever alone that place. Next to these were placed the Brasideian soldiers lately come out of Thrace, and with them those that had been newly made free. After them in order the rest of the Lacedaemonians, band after band; and by them Arcadians, first the Heraeans, after these the Maenalians. In the right wing were the Tegeats, and a few Lacedaemonians in the point of the same wing. And upon the outside of either wing, the horsemen. So stood the Lacedaemonians. Opposite to them, in the right wing, stood the Mantineans, because it was upon their own territory; and with them such Arcadians as were of their league. Then the thousand chosen Argives, which the city had for a long time caused to be trained for the wars at the public charge, and next to them the rest of the Argives. After these, the Cleonaeans and Orneates, their confederates. And lastly, the Athenians, with the horsemen (which were also theirs) had the left wing.

This is still the plan but it is looking likely that this particular army will be pushed back in the painting schedule and the reason for this is mainly down to Macedonians.

Currently working out the figures required for both an Early Macedonian army and a Late Macedonian army. The figures will come from the lead mountain as there is a 2,000 point WAB army gathering dust in there unpainted. Pages for both armies will be put up in the near future to plot their progress in a similar fashion to that of the Spartans.

Most of the figures will come from the planned WAB army but a few packs from the Polemarch range by Gripping Beast may well make their way here.


Polemarch Successors
These armies will offer some interesting challenges for both painting and on the gaming table; with the colourful appearance of Macedonia troops in certain references and the composition of the army changing greatly between the two periods. It will also offer some interesting opponents including Republican Romans, Persians, Hoplites and the Spartans and allies for the Battle of Megalopolis in 331BC.
If time allows some more work on the Vikings will be done as there are about 2 bases half painted here and there. Oh and if at all possible some time spent painting the FoW Germans as this seems to have taken off at the club lately.

So nothing much really for the painting and gaming tables in 2011.

Go tell them in Sparta

That we are ready.

The 6th Spartan Phalanx has just been completed enabling the Basic Impetus army to be played. Along with the three bases of skirmishers this will also enable a 300 point Spartan army to be used for Impetus as well - just one base of Allied Phalanx to paint.

The remainder of the planned 400 point Impetus army will still be worked over the next few months - time allowing as college deadlines are now looming fast so more time will be spent on studies than hobbies.

Here are a few pictures of the final phalanx, the image on the shield is from the Scritean Mora as shown on the following: 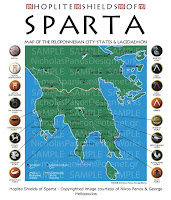 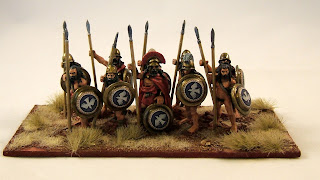 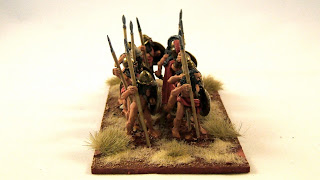 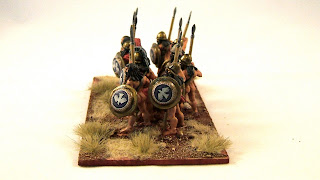 The following are of the army as it stands at present, 274 points worth of Spartans and helot skirmishers: 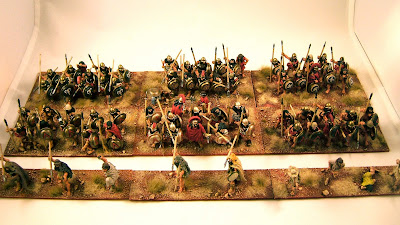 The phalanx bases have been doubled up as there isn't enough room to show the whole battle line as single elements. The last two pictures are of the phalanxes alone: 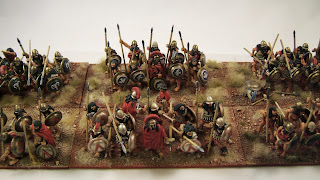 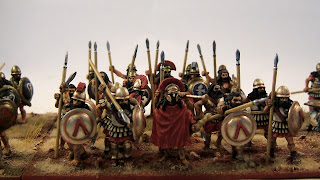 Lastly, a Happy New Year to all.
Cheers