It's not that bad.

Well, all things consider the mishap with the varnish isn't the end of the world. Felt like it at the time though. The figures have been removed from their base and the offending areas lightly undercoated in black. This enables the figures to be repainted to match the existing colours, which shouldn't be that hard as a limited pallette has been used throughout the paint of this army.

The pallette includes the following:


There are a few other colours used for belts, scabbards, sandals etc but these have varied from phalanx to phalanx as necessary.
The figures will be painted at the same time as the final Spartan Phalanx for this army and hopefully will be  complete by the next club meeting in October.
Anyway here are a few pics of the walking wounded with their black undercoated 'bandages' on: 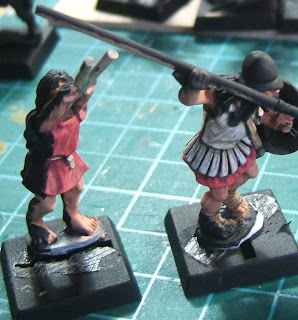 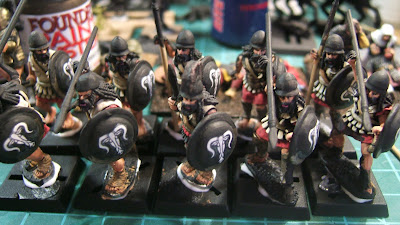 Well, it is looking like the 5th Phalanx will be making their way back to the painting table. The matt varnish has bloomed - which is a first, well so far in 25 years of painting miniatures anyway.

Some parts of the figures will be okay, but the bronze helmets, shield rims and dark hair is now mottled white - not the effect that was desired for these miniatures. The sod of it all is that the figures are all based on their gaming base so will require a fair bit of work to remove so they can be repainted. The shields will be alright with a slight retouch here and there. Which is good as they have LBM transfers on them for the mora which this phalanx is depicting.

Hopefully, it won't need to go as far as nitromors. Fingers crossed anyway. Obviously, there'll be no pics to show of the 5th Phalanx unless its of the repaint as it happens.

Can anybody recommend a good matt varnish?

...when you're having fun or so the saying goes and for that matter so does September, can't believe the date already.

Not much has been happening here and with college looming next week time is going to become evermore sparse for painting and gaming. That said a release is always needed and what better way than immersing oneself in painting the past glories of the Spartans and gaming in general.

The 5th Phalanx is waiting on the base being finished and the 6th Phalanx has the flesh blocked in; so still moving forward towards the finished army.

The plans for the base camp for the Spartans have been finalised with the purchase of a Dokana as a focal point for the camp. The figures are all prepped for painting, but will have to wait until the main army is completed.

Hopefully there will be some pictures of both units and various work in progress posted shortly.

The North Face of the Lead Mountain

With the best intentions in the world the summit of the lead mountain has been capped at  its present level. Hopefully, with the completion of the Spartans and the projected work on the other Impetus armies and Flames of War companies a small dent will be made in the mountain over the next few months. That and a Masters dissertation to boot, no problem there really...

The Allied Phalanxes have been selected from the lead mountain, and will also be from the World of Greeks range by Foundry. The decision was based on availability of the figures, in that they had already been purchased several years ago and that they'll also double up as standard hoplites for Basic Impetus games against the Spartans - which is looking likely to be Magna Graecia or Theban. Sort of killing two birds with one stone here by doing this.

Work on the 5th phalanx draws to an end with the weapons and shields to complete before basing the unit.  Unfortunately, the basic army won't be finished for this weekend though as life and work have taken over again. That said the overall plan for the army is moving along relatively well and should be finished for the set date. A date, that hasn't been set - so based off 10 figures per 3 weeks at present and 47 figures to paint, making 15 weeks from now. That makes the date for completion December 20th, not that there isn't much else going on outside of painting and gaming. Well, can but try and the date hopefully will make this that bit easier.

Hopefully get some more pics up at the weekend.