Back to the Brushes 95

As September draws to an end, so hopefully does painting Moorish Spearmen for a few weeks or so. Pictured below are figures from Gripping Beast as they progress to being ready to base. 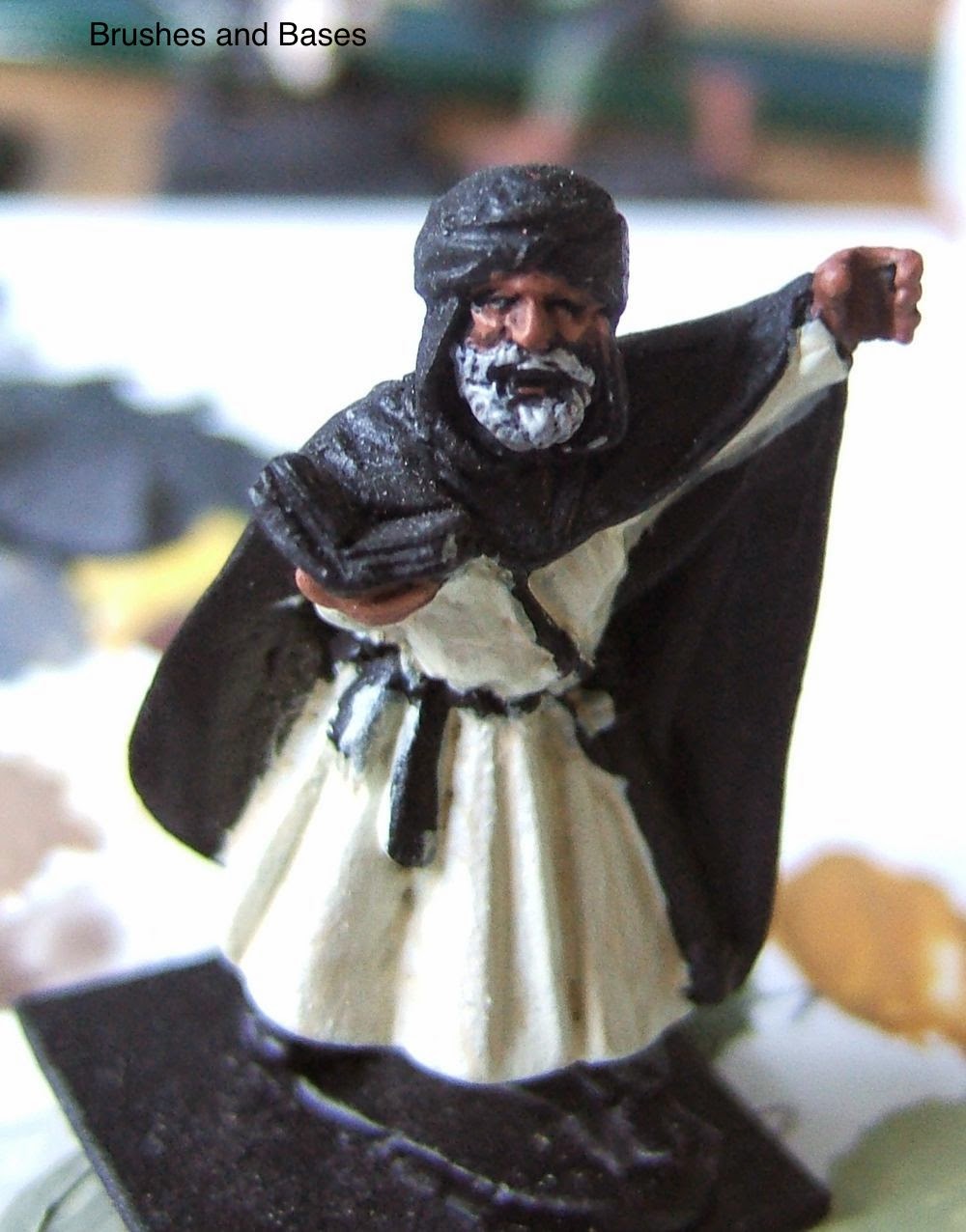 A couple of Iman to inspire the faithful and lead their followers into battle. The figure above is still very much work in progress whereas the figure below is ready for varnishing and basing. 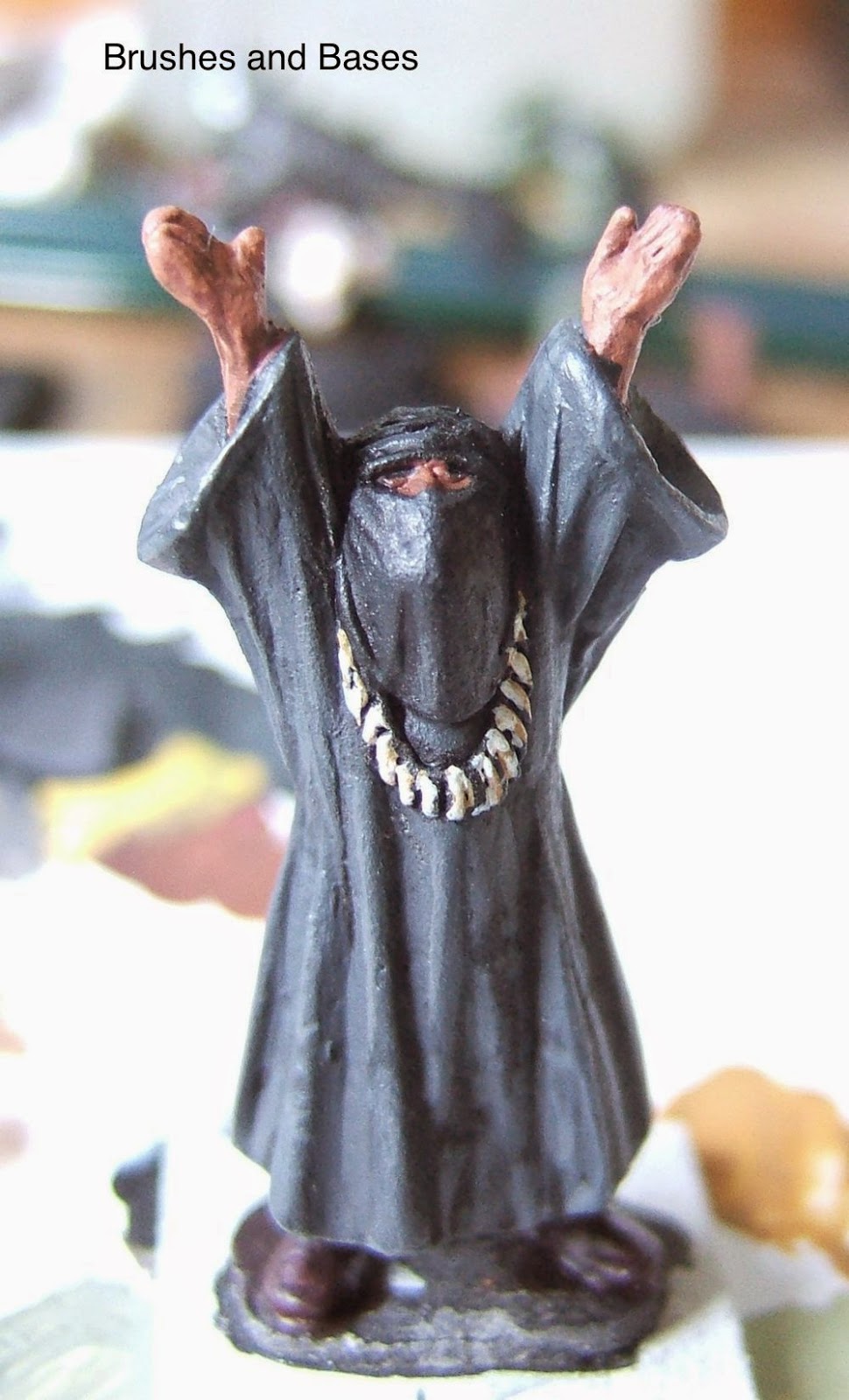 Another three spearmen for the rank and file troops in the stands. The whites of the eyes are perhaps to clear here and will be knocked back with a wash of Devlan Mud or its equivalent very soon. 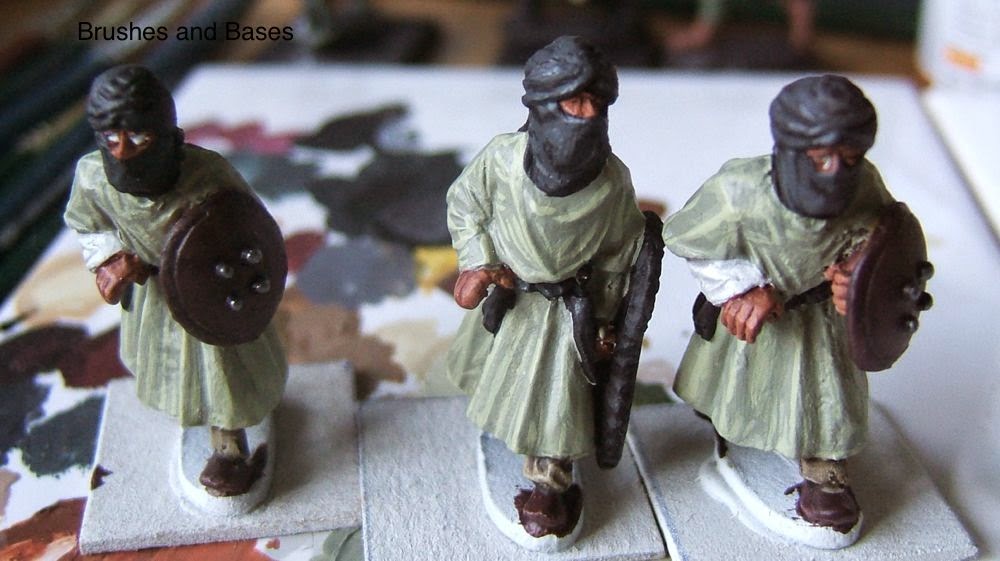 Looking to have four stands of Foot Protected from these figures with up to nine figures per stand and pictured below are how the figures are starting to fit together for the final bases. 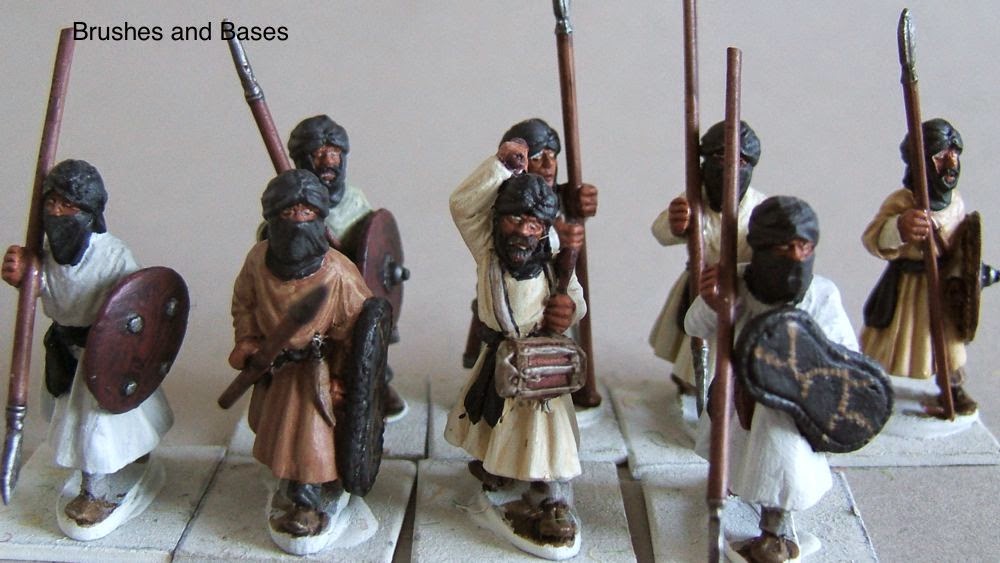 The shield transfers shown below are from Little Big Men and will all be in the one stand when completed.

Next up will be something from an army that is very likely to never be finished, but more of that soon.

Back to the Brushes 94

Pictured below are some 15mm figures from two very different periods that are both being based at present.

First up are the from Minifigs English Civil War range and are part of a second hand collection that has slowly been rebased and washed in Devlan Mud over the last two or three years.

These figures will be used as camps in Impetus Baroque, which hopefully be returning to the gaming table soon and perhaps the full rules released. 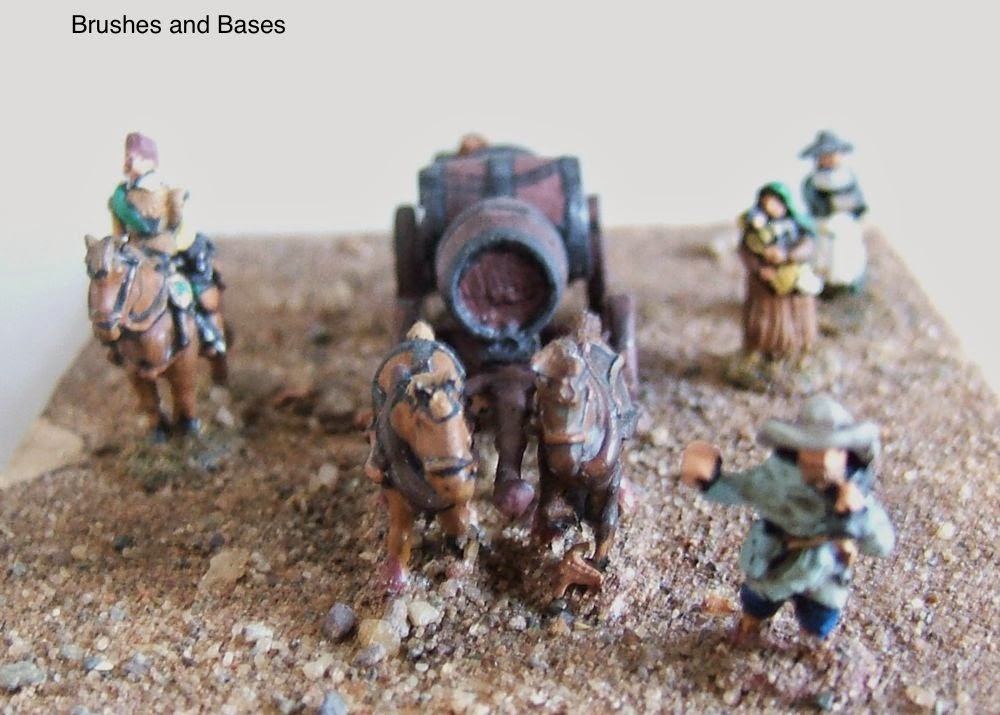 There are still a few figures to paint for this period including some more musket and pike and cavalry.

The second offering this evening are from Ground Zero Games and will be gracing a table in the near future under the rules of Critical Mass. 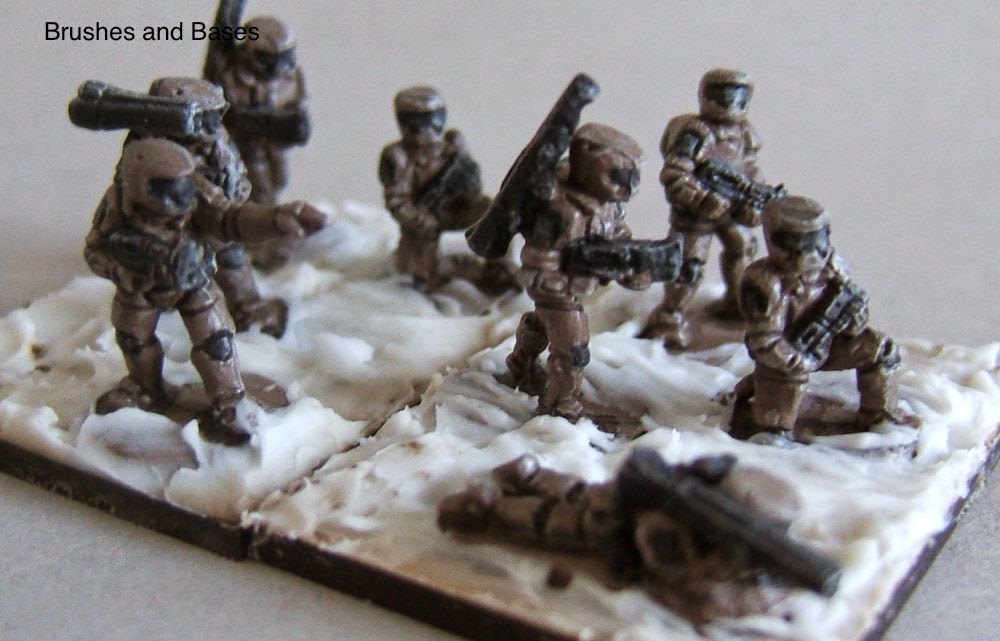 The stands shown here are waiting on the ready mixed plaster drying and are from Missile and SAW support elements. The quick approach to painting these figures is clearly visible here, however once fully based and flocked it won't be that noticable on the table top. 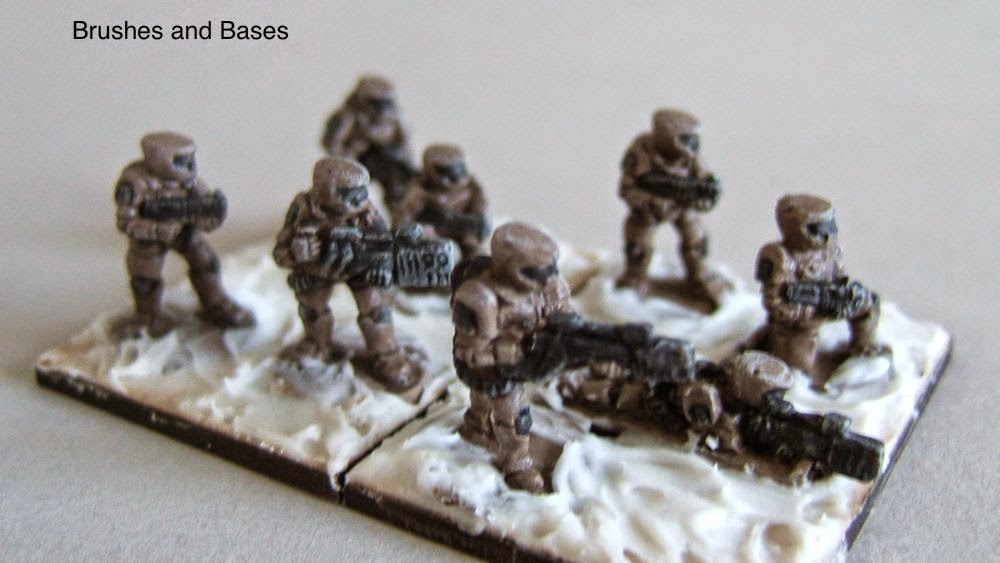 Not long after being introduced to fantasy roleplaying another game was flagged up. This game, now the subject of much debate and differing opinions, was in its original incarnation a system that allowed entertaining and varied fantasy skirmish games to be played out in an hour or so. It is of course none other than the first edition of Warhammer. 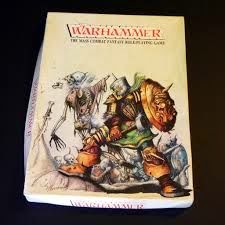 The companion set, shown below expanded on the original game and allowed more detailed and larger forces to be fielded.

Beyond this point, I have never ventured, staying with the same game that was the first tabletop game I was introduced to. Now there are too many systems and rules books, each vying for their share of the market and your hard earned cash.

Every now and then both of these sets are brought out from their box in the attic and a few solo games are played. The fun and entertainment can still be found in these copies of this system, the more recent editions I cannot comment on.

Tomorrow brings the possibility of major changes to standing and organisation of the country that I live in. Rather than pass comment on this I will leave you with some words of wisdom from Charles Bukowski:


“what matters most is how well you walk through the fire.”

Regardless of the outcome there will be fires to walk through.

This month, thirty years ago,  a discovery was made that not known at the time would be a part of a hobby that I still have involvement in. That discovery came in a red box and started a saga that is still on going. 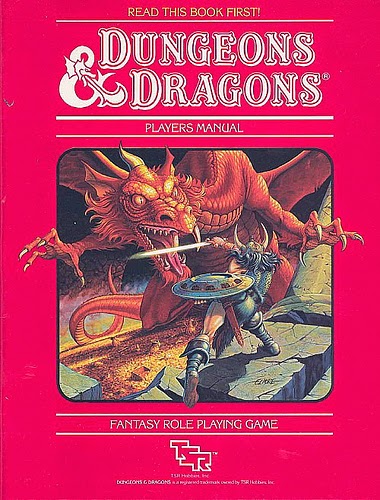 Eventually, when the players within the group had "levelled" up several times and the resulting party suffered a total party kill at the hands of a GM who introduced NPC's that could match the party's fire power. The fight at the Falling Bridge is still a grand memory of those early gaming days. There was a fair deal of upset caused and a new group sprang forth from the ashes of the last, similar to the phoenix in mythology.

This group were looking for a little more detail and ventured into new realms, well in gaming terms, that is. The resulting games followed the literary exploits of two very different authors: Tolkien and Moorcroft 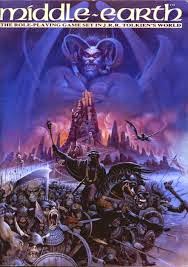 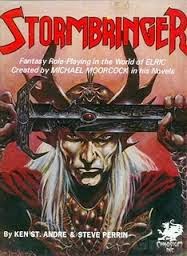 The games were also very different as were the resulting campaigns for both, however, one system eventually won over the over the other and a new era began. It was the time of Rolemaster 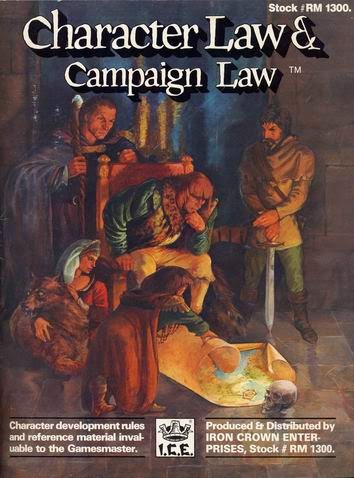 Tables and charts became the norm, as did crunching numbers and looking for more "realism" in character development and combat. Companion followed companion, characters gained new heights, only to loose them shortly after. For years the game continue as a gaming world was developed and expanded. However, things change and people do to. For some the system became everything and the quest for realism, eventually undid it all, as the essence of the game became lost in the rules behind it. The essence of the game being fun and banter around a table.

As Dungeons and Dragons moves into its 5th edition and gaming is changing. No longer do people have to be in the same room around the same table. No longer is realism the centre of the game. Now table is virtual and a new era has started, the game is different, as are the rules, but the essences are still have returned to those found in that red box: fun and banter.

And Now for Something Completely Different 20

A Laser Defence company for the ARC forces in Critical Mass. The battery is shown in a disarray rather than all guns blazing so to speak.

The figures are again from  Ground Zero Games and were a sod to assemble but worth the effort in the end. 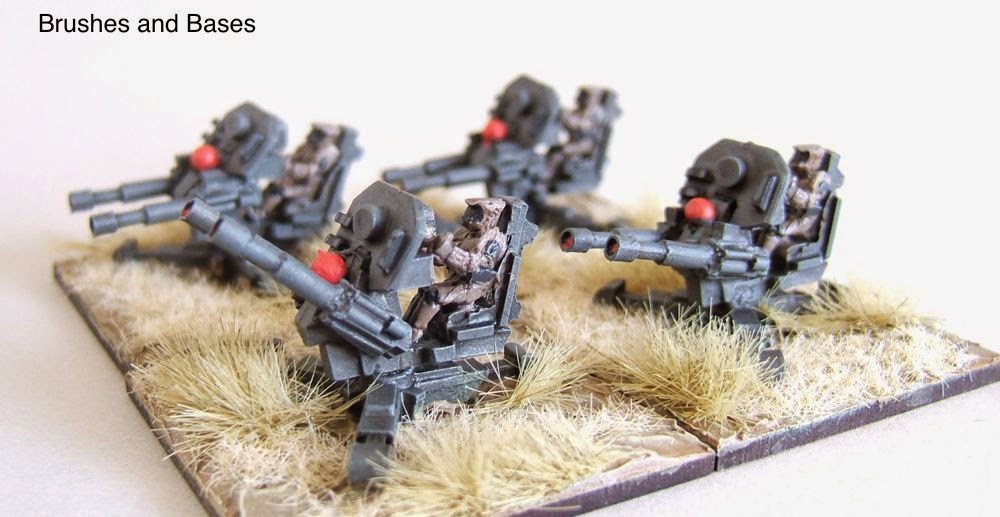 Next from this range will be a Missile and SAW support company for the infantry already painted.

Back to the Brushes 93

Every now and then something new is started. These figures are a part of this and are three stands of fifty odd to be painted.

The figures are from Old Glory and are being painted on their stands of three. The process of painting these miniatures starts with a grey undercoat, basic blocking and then washing with Agrax Earth shade. Overall the process is working well and gives a suitable result for the table. 15mm is not a scale that gives the same enjoyment painting that 28mm does; however painted they will be.

The figures will be used in games of Battlecry - the American Civil War variant of Command and Colours - and Fire and Fury. 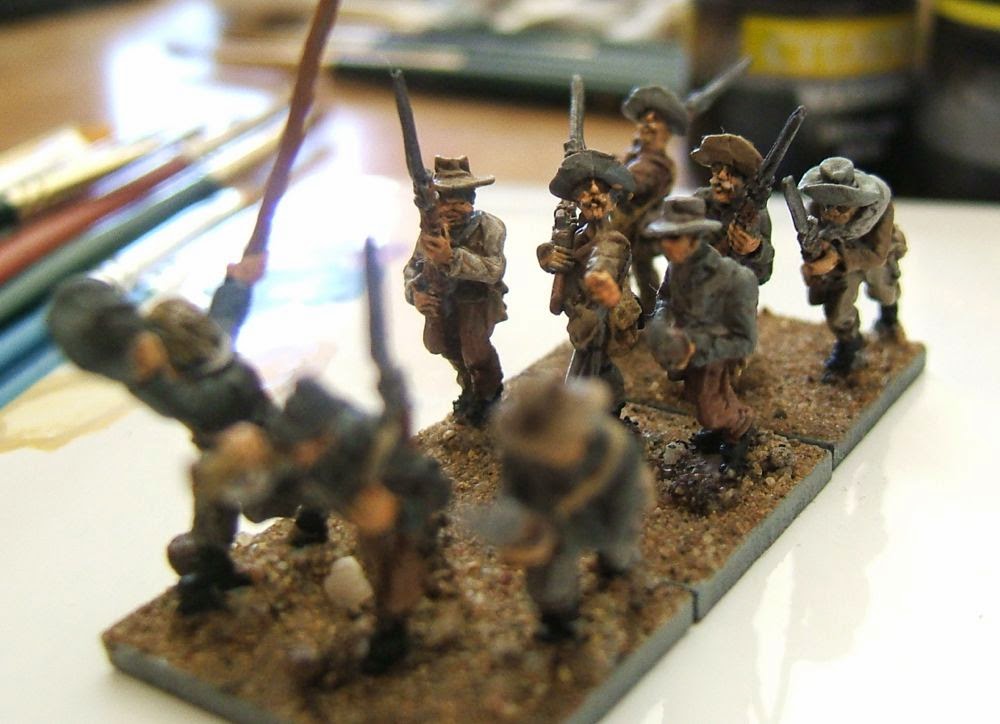 Pictured below is a stand of skirmishers for the Moors army that is currently being painted at present. 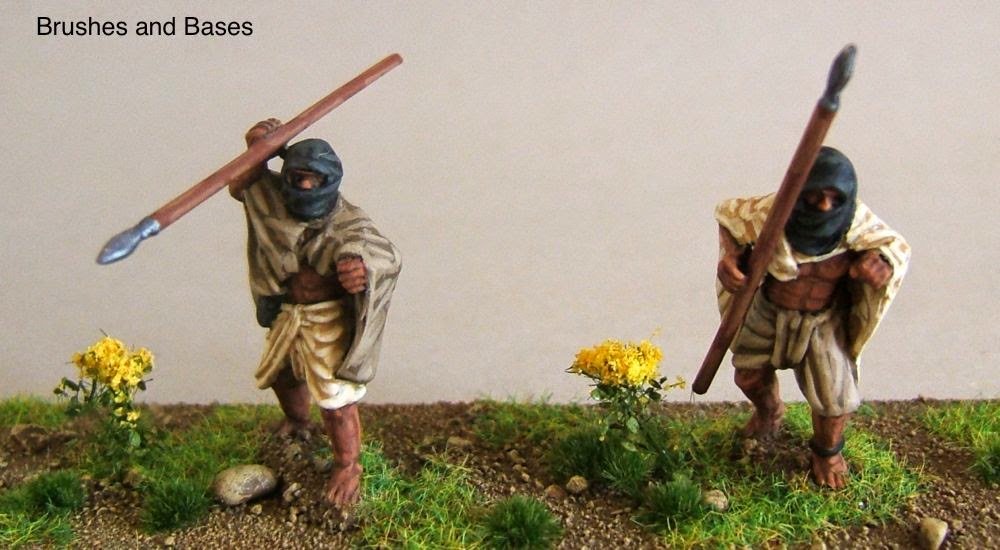 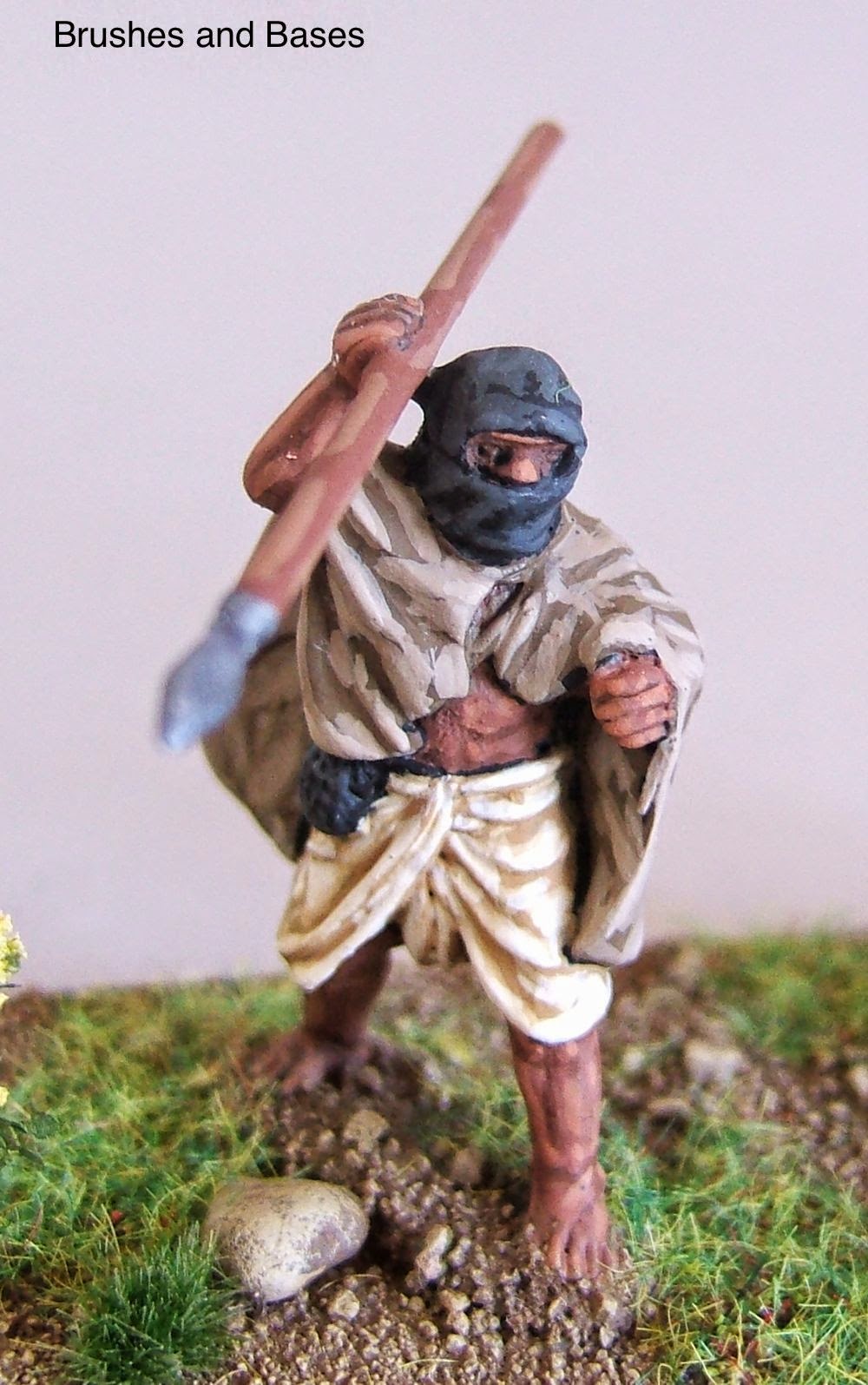 The figures are from Gripping Beast's Desert Frontier range and fit in well with the Berber spearmen that are currently being painted. 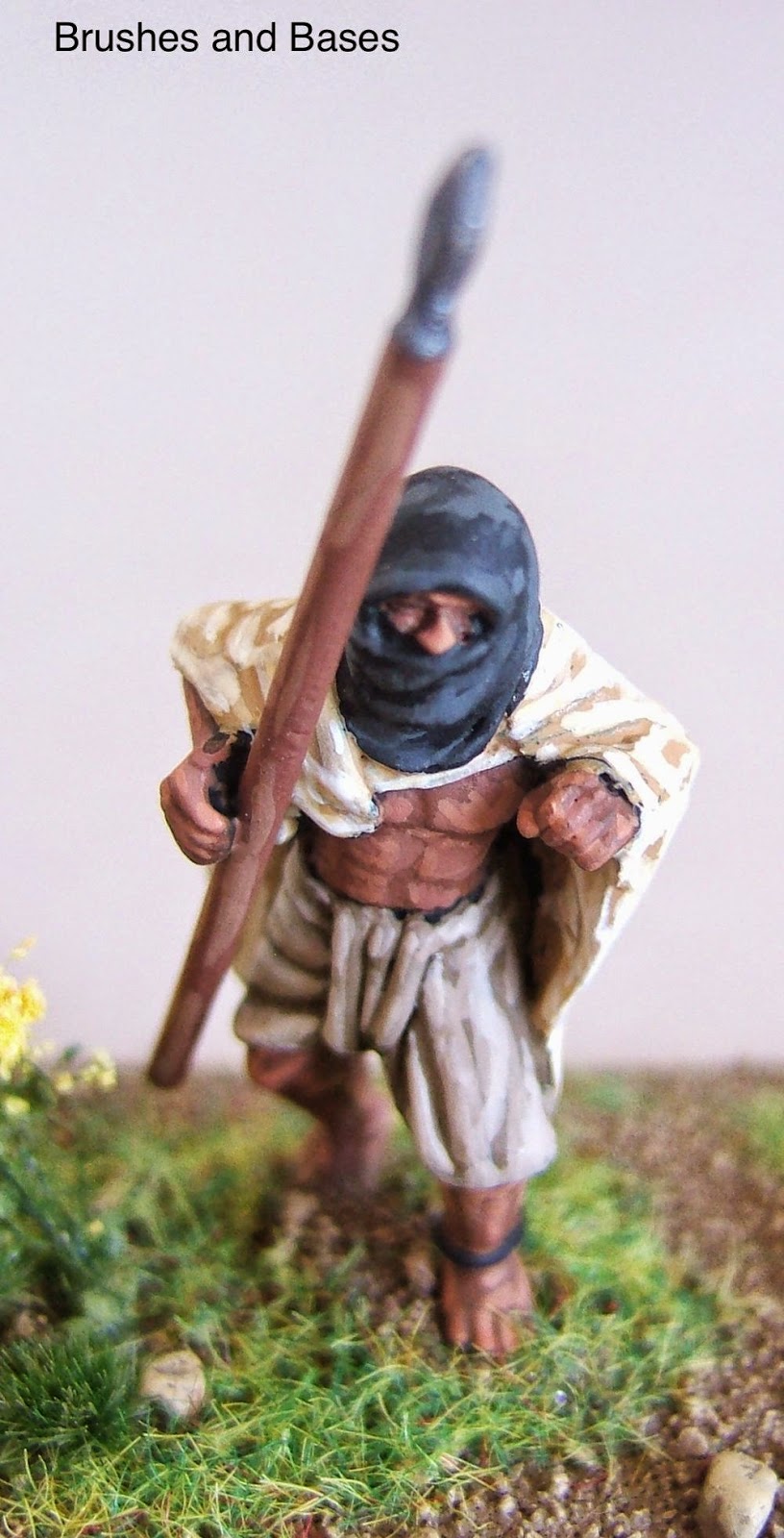 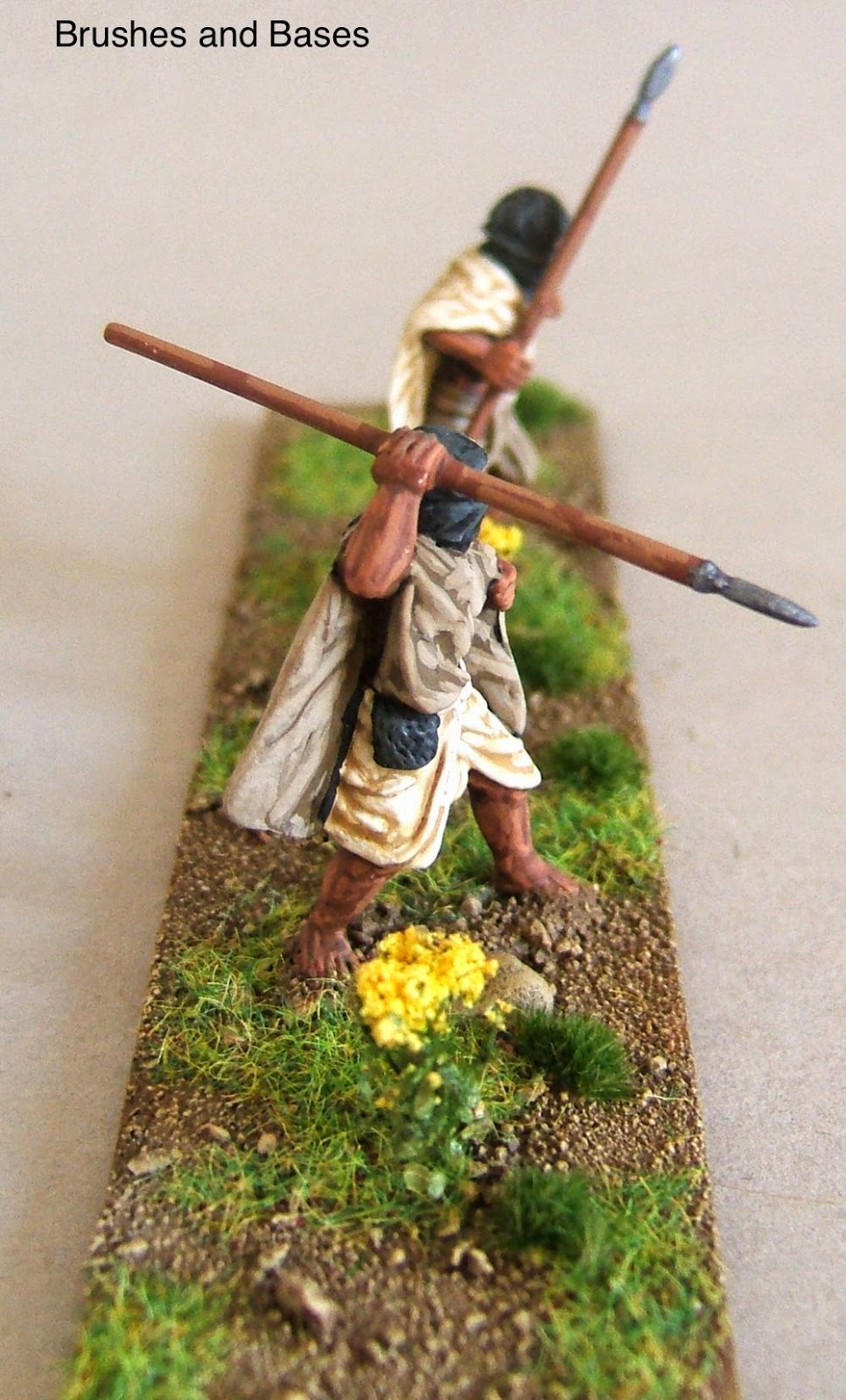 There will be some more work in progress pictures to follow shortly plus something just a little bit different.