Been working on some Hex terrain features recently for broken ground. These have been painted with emulsion matches to Foundry Granite C and B. 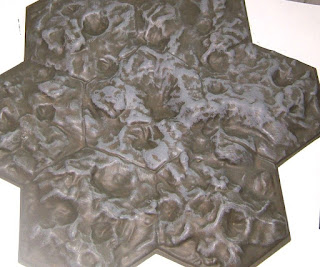 Here are two that have been flocked, on the left fully dry and on the right drying. 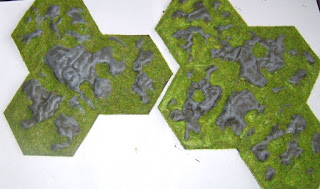 These are for use on a Hexon board for a 15mm version of Battle Cry. The larger bases will work for some scenarios however, practically single bases would have been a better option; you live and learn.

Hoping to have another game of Chain of Command soon and this time will be looking at movement and shooting with more detail.

Have noticed that in WW2 gaming the scenery is as important if not more so than the actual figures as it really does determine the battlefield in this scale. Movement between and to terrain features is key to staying alive in this game as cover is a great aid to surviving and achieving objectives.

Some pictures of the terrain features that have been dug out of the attic to be used in Chain of Command that were thought to have been painted. Oh, how wrong as only the base coat had been laid down. 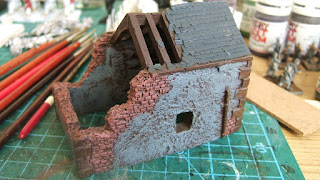 Below is a partner piece to the above from Hovels and has only been base coated with Homebase's exterior paint Bitter Chocolate Brown. This has been the go to base coat for all scenery and buildings for myself for years, sadly not sure it's still available. 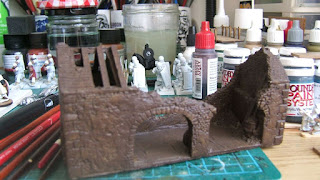 The last ten days or so have offered very little opportunity to get some painting on any of the current projects done. Its been slow all round to be honest with very slow progress on the Moors for SAGA and Basic Impetus. 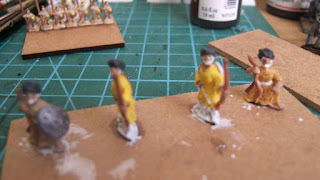 To be honest Game of Thrones has gotten in the way this last week as watched the first five episodes pretty much back to back. To say it has been enjoyable is an understatement. 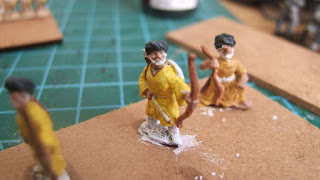 The problem with enjoying something like Game of Thrones is it starts you thinking about another project which often means the current project stalls and falters for a bit or stops altogether. Thankfully the thoughts are small in number and might never happen. 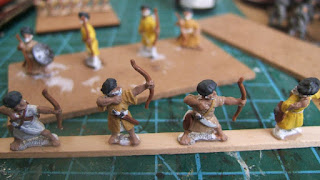 The next four Hirdmen for SAGA and Basic Impetus have moved on a bit since they have been started, but not that much 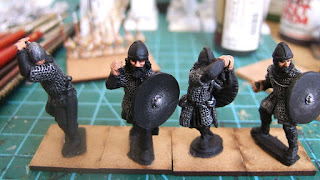 The last from the Almoravids for a while as there are no more to base. Here there are the bulk of the army, the spearmen, with three stands out of the four required.

There is a mixture of hand painted and transfer covered shields in these stands. Felt this was the best approach as didn't want a uniform look to the units other than the head dresses which will be carried over the entire army. 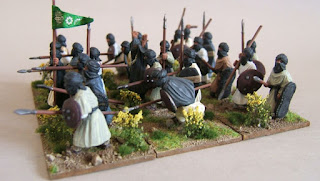 The last stand is still to be painted and will be slightly different in appearance than these, but more of that later. 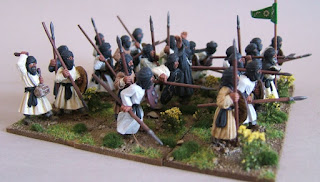 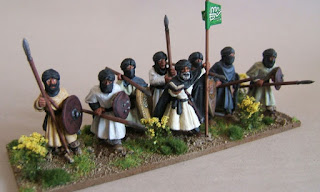 Once the spearmen are completed it only leaves five stands of archers to paint or thirty figures to be precise. That is a lot of spindlers. 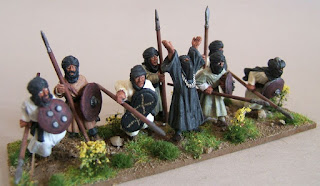 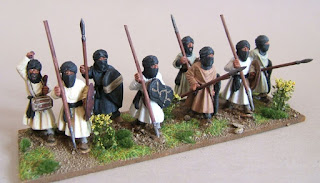 Back to work in progress pictures for a while.

Well after the first post with this title tried something new - Chain of Command. 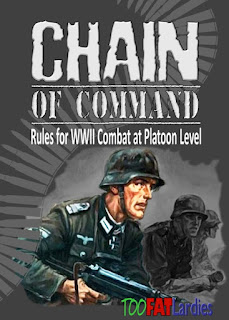 WW2 is a period that has always been of interest; probably due to growing up in the seventies when a good war movie was considered a good film until circa '77 and a certain film was released.

Surprisingly have a fair range of painted figures, support weapons, vehicles and buildings to game with. Hoping that Chain of Command will give an opportunity to dust off the British and German forces for the Late War period, which is very good as neither have seen the light of day in a few years.

As with any new rules, have a tendency to start small and work up to larger games. So infantry first with no support options just to get used to the moving, shooting and command rules. The rest can be added on in subsequent games.

After scanning the rules there a few gaming pieces that might be required if this becomes a regular game. Only time will tell on that although hoping to arrange another game of the same shortly.

With regards to painting - its mostly dark age and early medieval just now so the two parts of the hobby won't clash.