Below are some working progress pictures of a few of the miniatures on the painting table at present. Firstly, another Chaos Warrior from Citadel in the mid eighties who will hopefully be completed this evening. 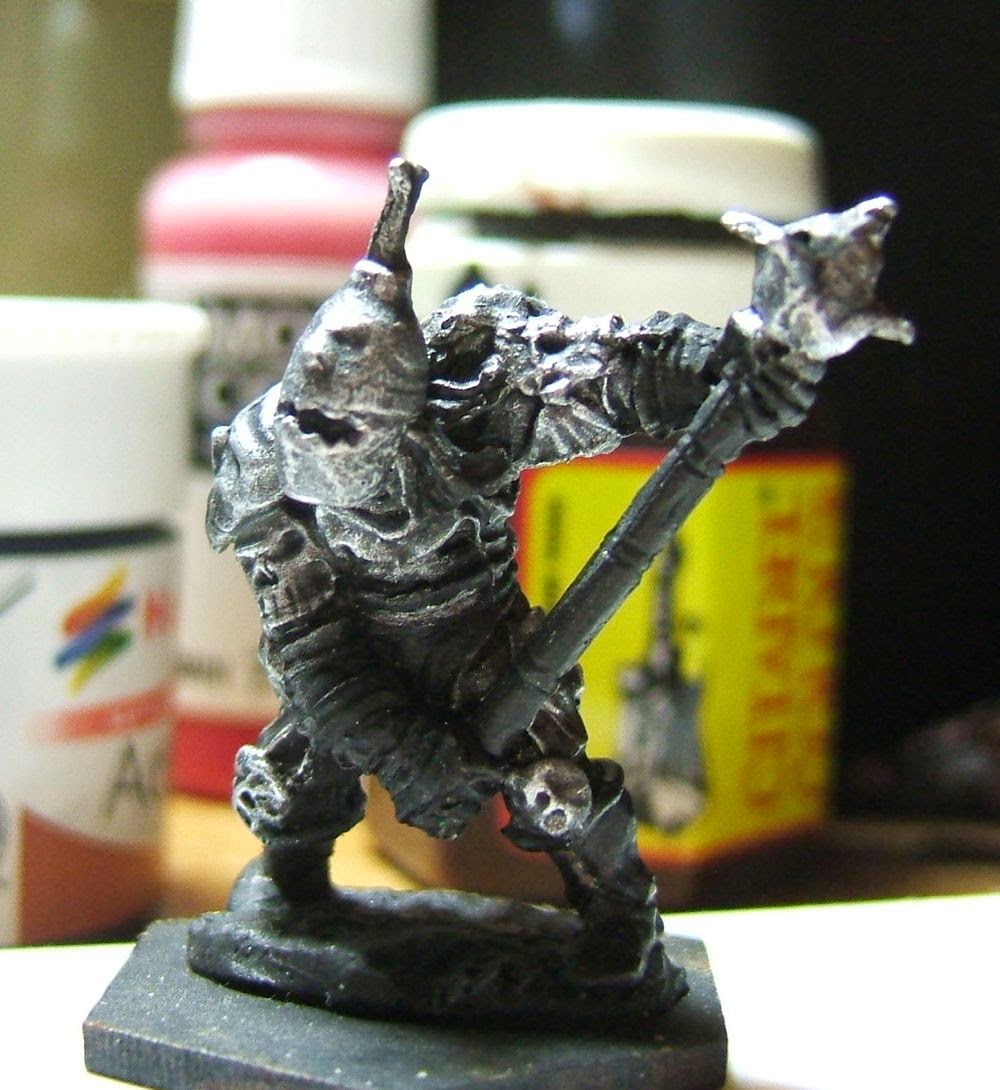 Next are two of the nine Uruk Hai that are being painted at present. It seems that there has been a bit of splatter going on whilst base coating the Drop Troopers beneath. The other seven are moving along steadily as well. 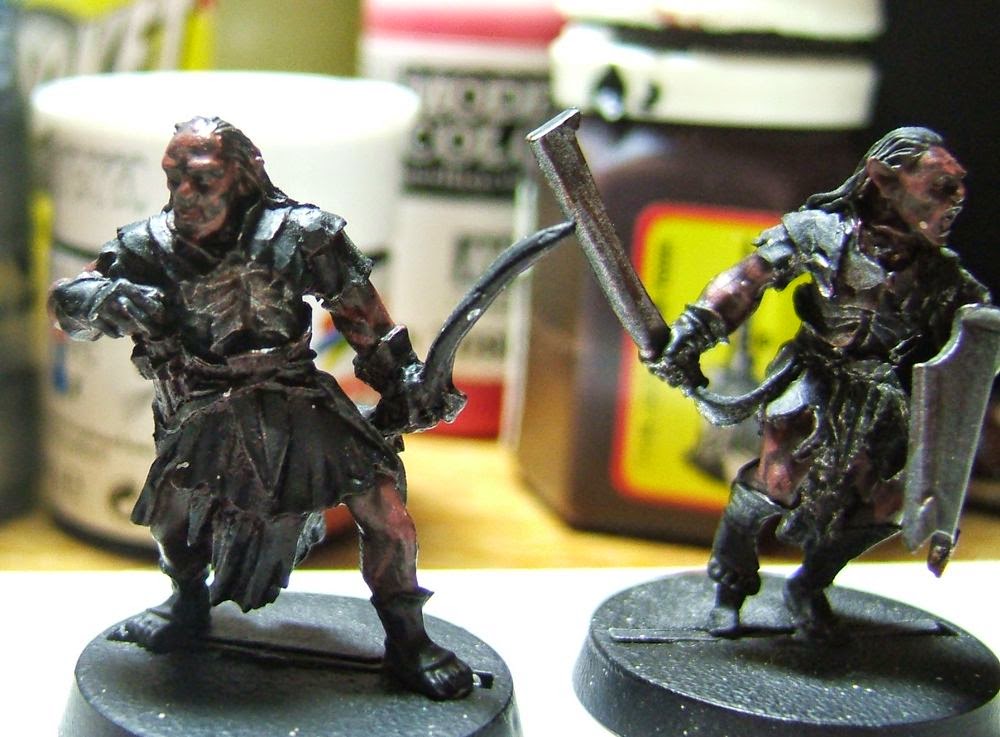 The Drop Troopers will support the GZG Infantry recently painted for the challenge - pictures to follow. 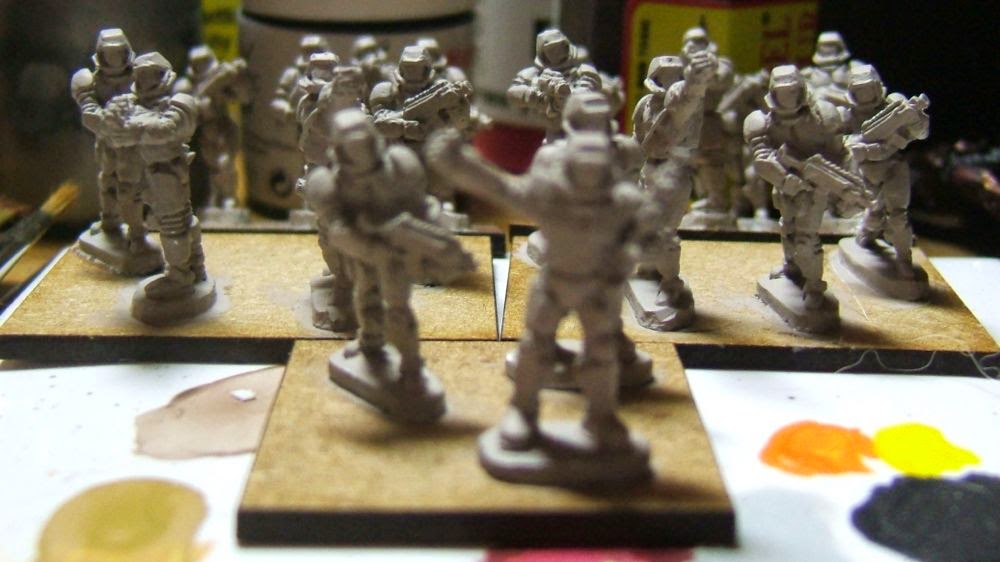 Some more "cats" for the Germans in WW2, this time three Panthers all from Frontline. The two pictures show the base colour Mid Stone from Vallejo and then how it looks after a liberal wash of Nuln Oil. 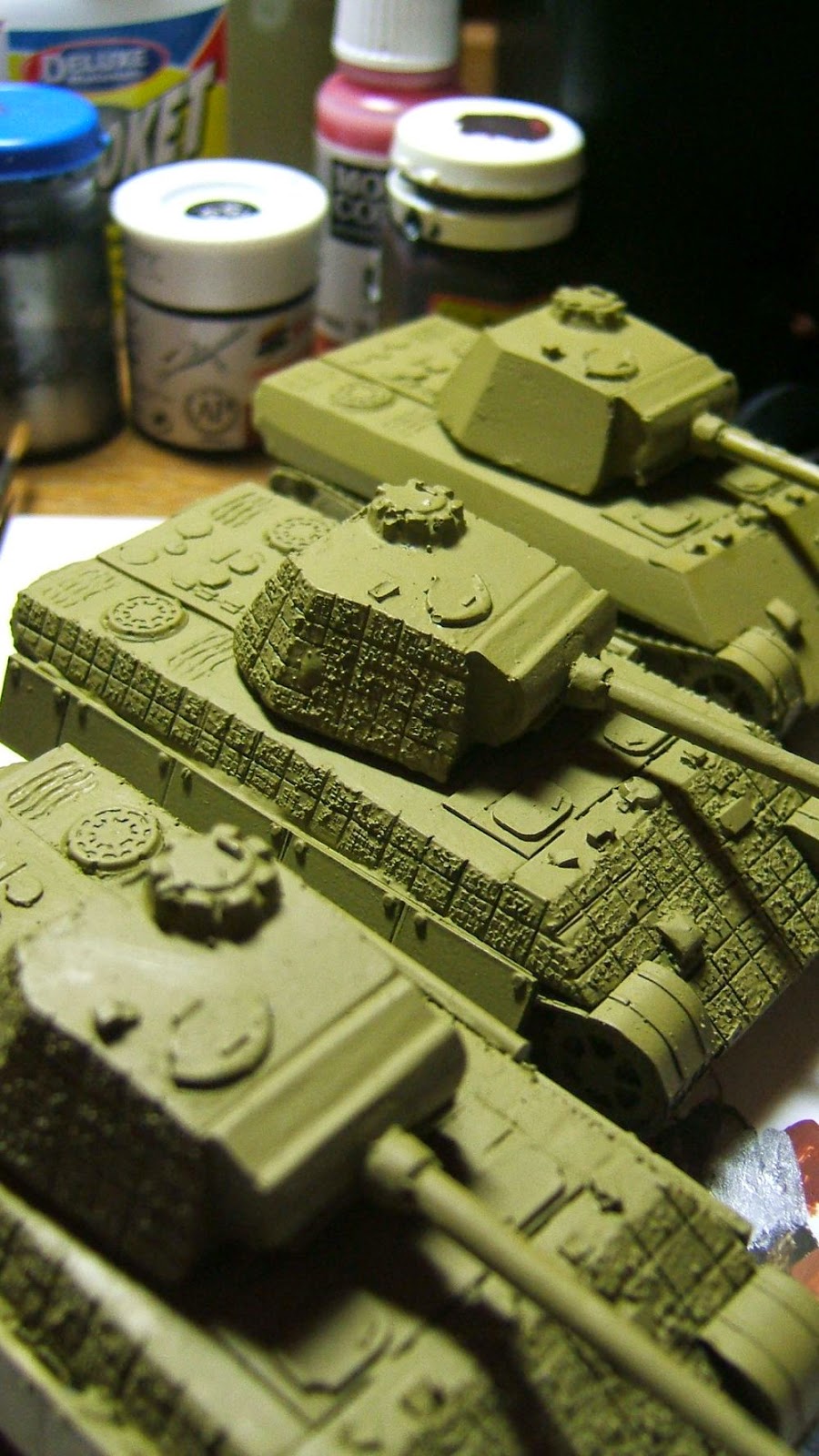 From here the tanks will be dry brushed the base tone again, camouflaged to suit and then dry brushed Foundry Moss C. At this moment not sure on how the camo will look so will be doing some image searches for ideas soon 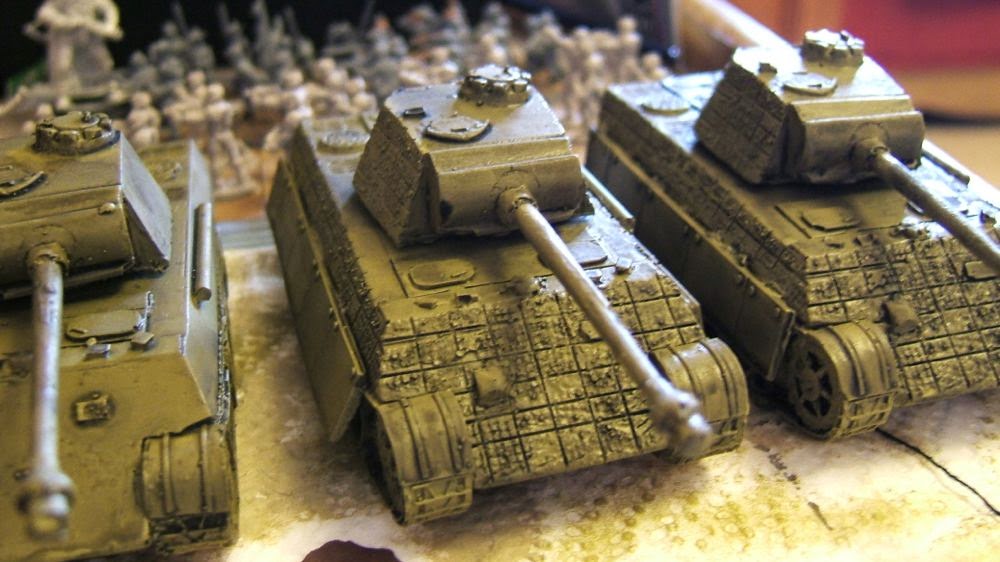 That's all for now although there will be some completed pictures to follow.

Back to the Brushes 99

A quick update on the painting progress at present - apologies for the lousy pictures. As has been the norm over the last couple of months a couple of different periods and scales have been getting worked on at the same time.

First up is another retro Chaos Warrior from Citadel. Bags of character here, although the pic really doesn't show it. 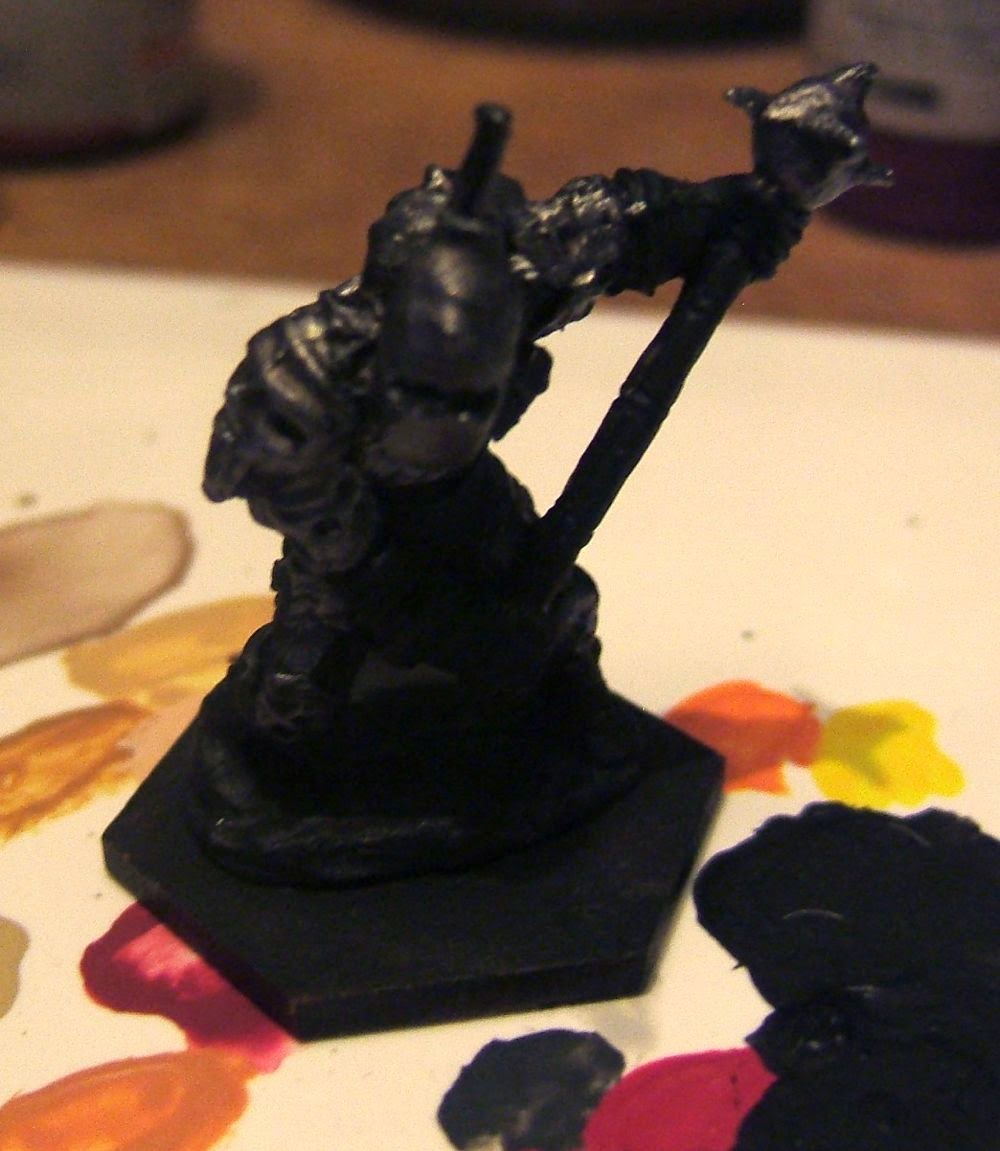 Next up are four AFV from Britannia Miniatures. These will be worked on over the weekend taking the total of completed 1/72 scale vehicles for WW2 waiting to be shown for the Analogue Painting Challenge to nine. There hasn't been an afternoon when the natural light has been good enough to take a range of pictures - as these quick work in progress pictures clearly show. 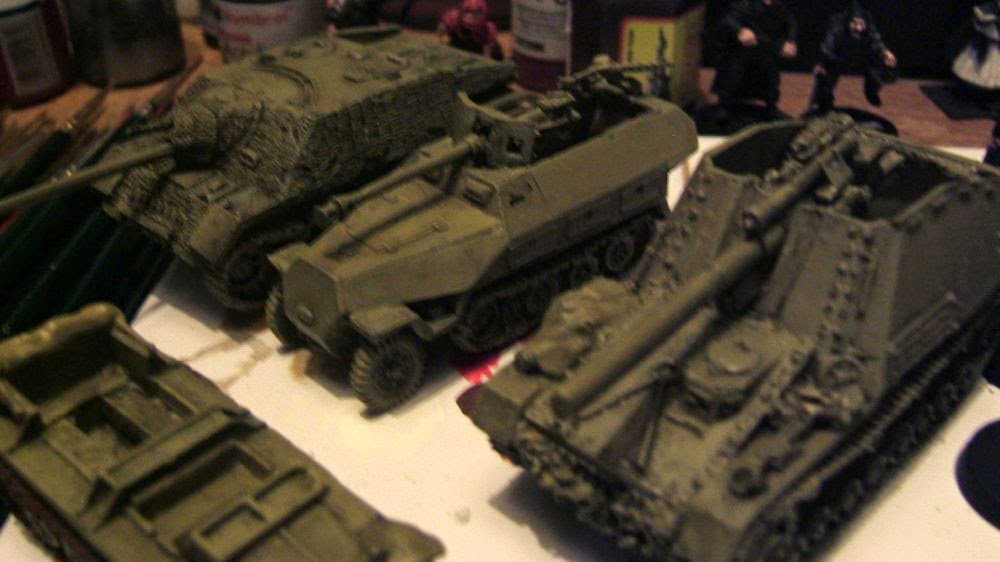 Last up are - although you may struggle to work out the 28mm figures - Uruk Hai from Games Workshop's LOTR range and 6mm from Rapier Miniatures. The Uruk are to complete a warband started just after the release of the Fellowship of the Ring and the 6mm are this year's major project. 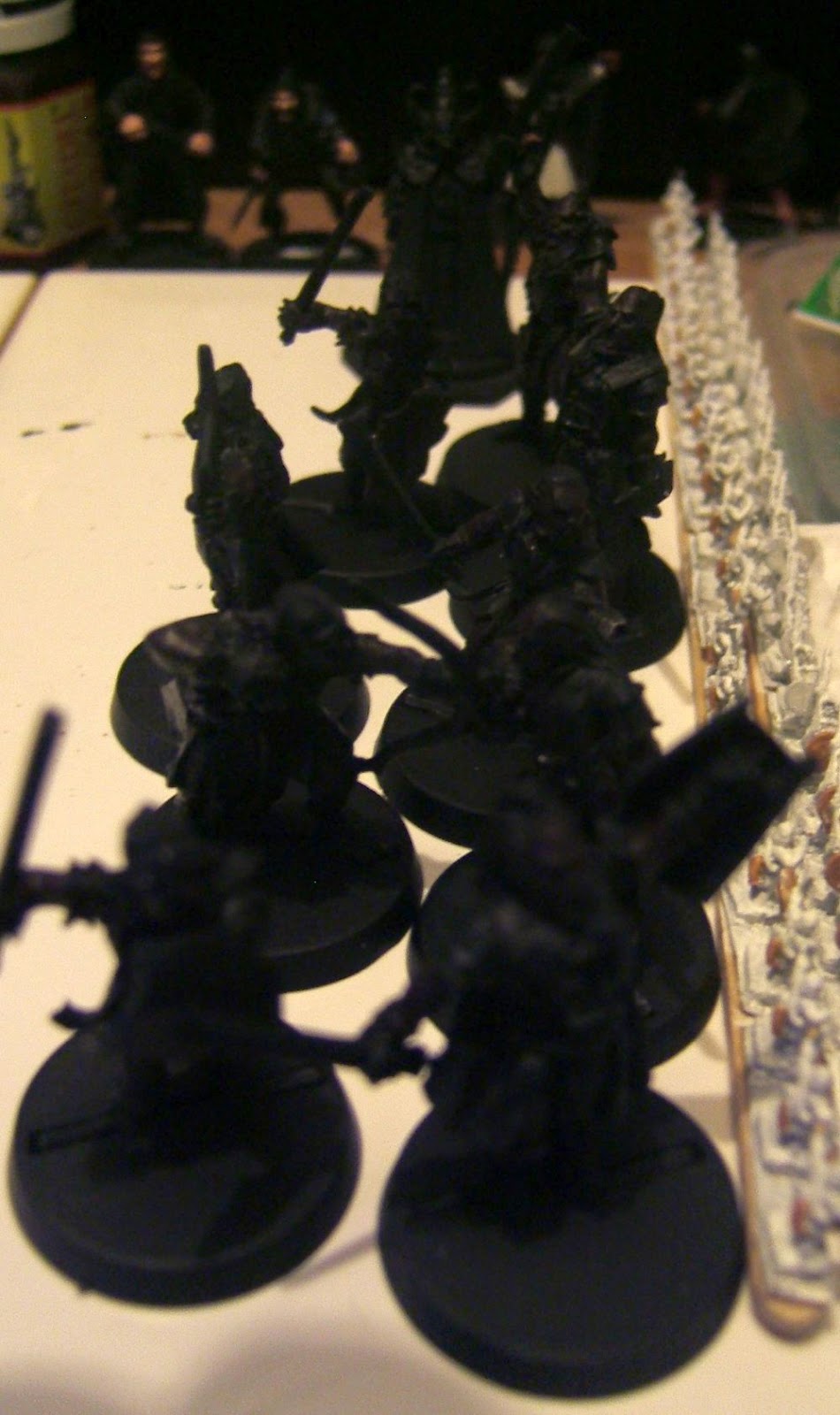 There will be more to follow soon as well as some finished items from a while back.

Back to the Brushes 98

Here are a few work in progress pictures of a variety of different items that are being worked on at present: 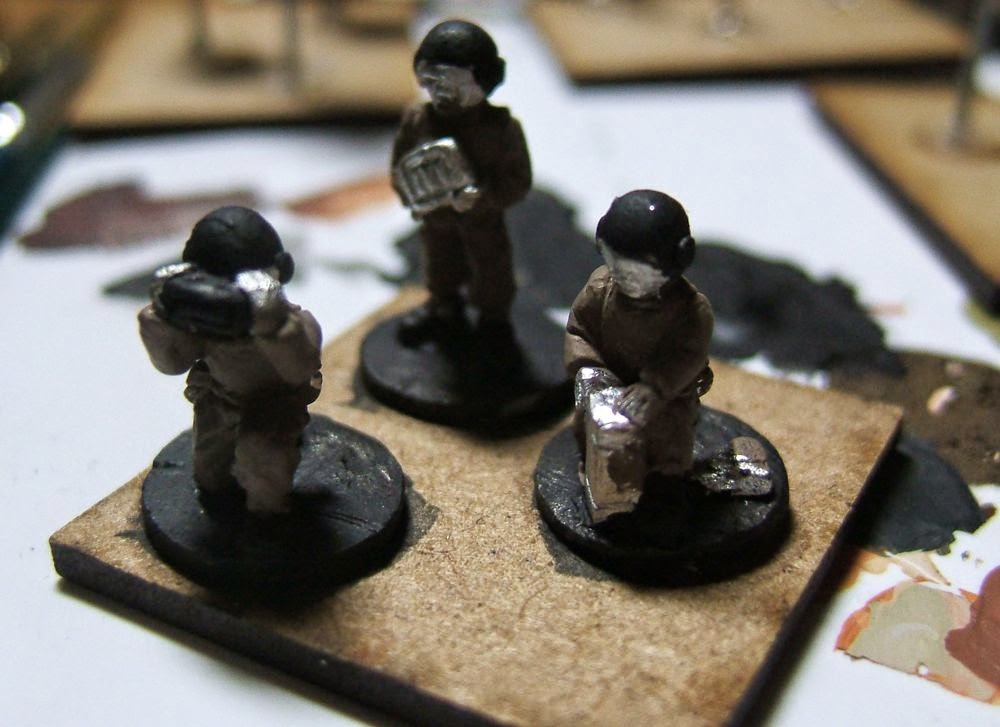 First up is a command stand and three attack drone stands for Critical Mass. The figures are all from Ground Zero and will hopefully all be completed this coming weekend. These will be used in a supporting role in Critical Mass and have been a sod to glue into place; hence why there are still three to do. 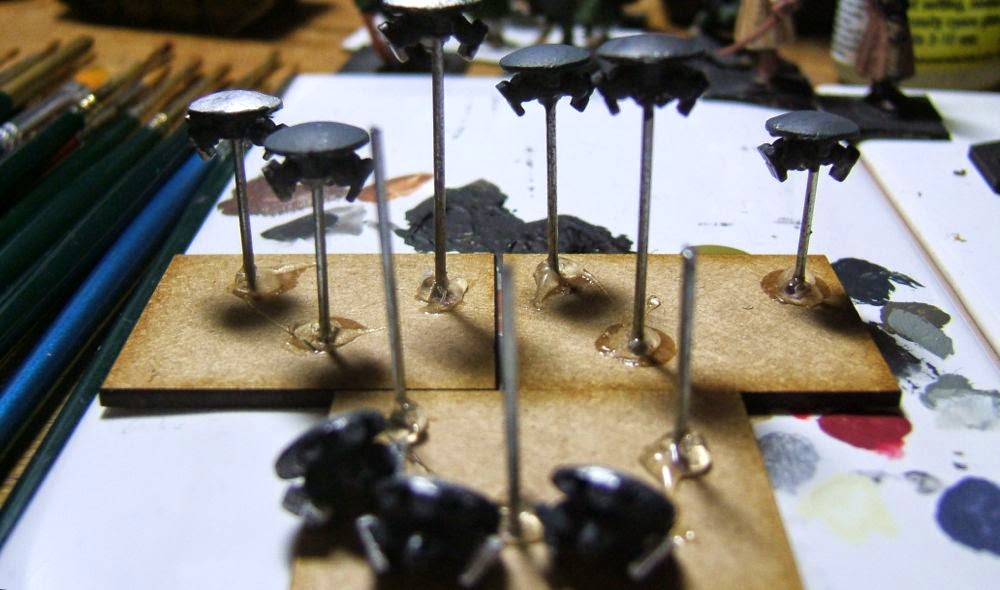 Next are two Chaos Warriors for the growing Songs of Blades and Heroes warband. One figure is being painted in tribute to Rackhir the Red from the Elric Sagas, can you work out which one? 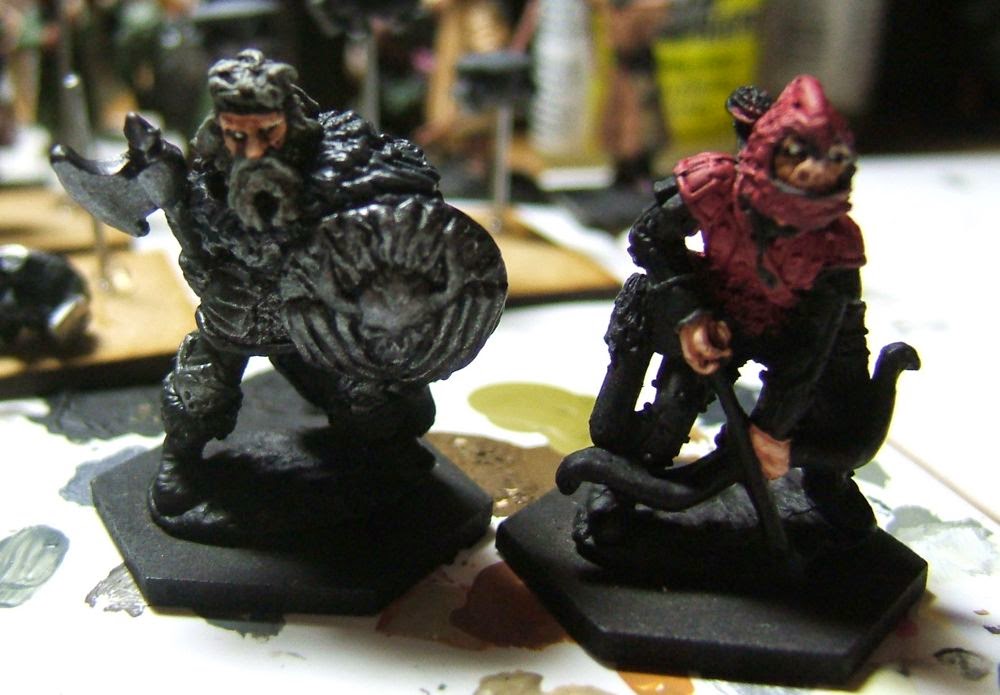 Next up are two roguish types from Otherworld Miniatures, the left hand figure as viewed will be making his way to Canada when completed. 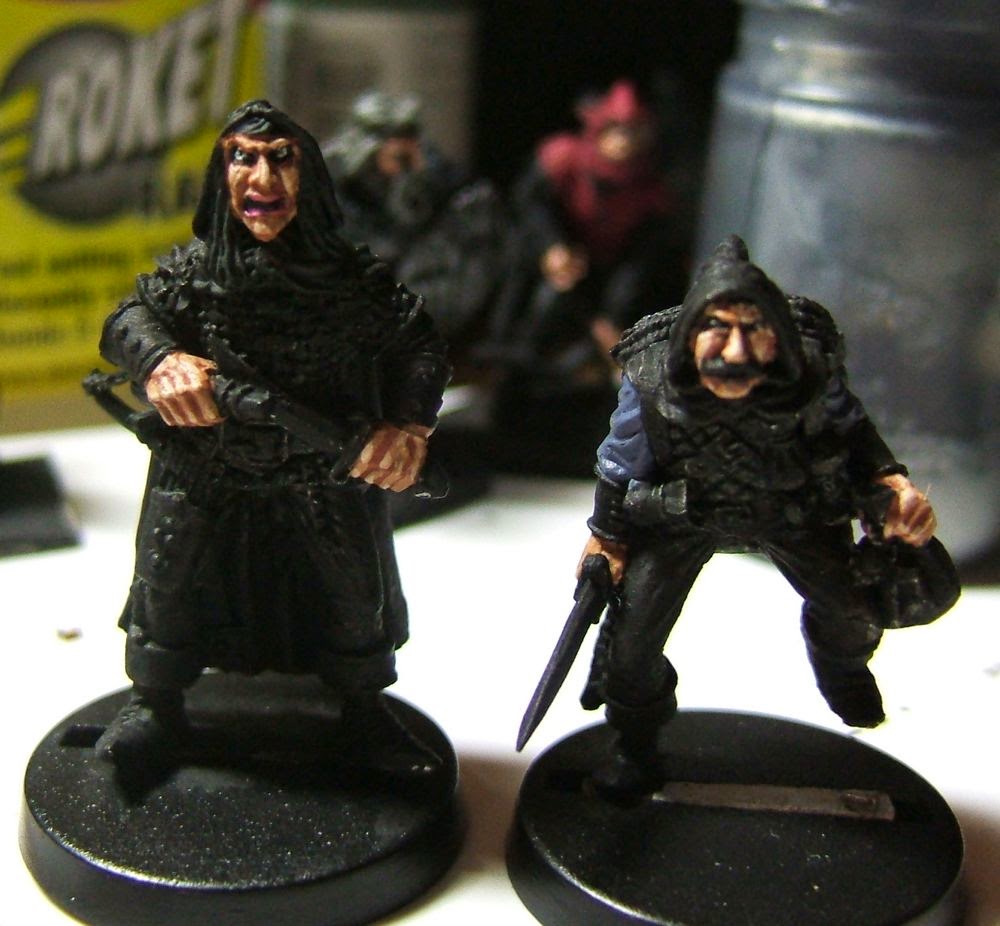 Below is a Hertzer - Jagdpanzer 38 - tank destroyer again from Britannia Miniatures which should also be finished by this weekend. 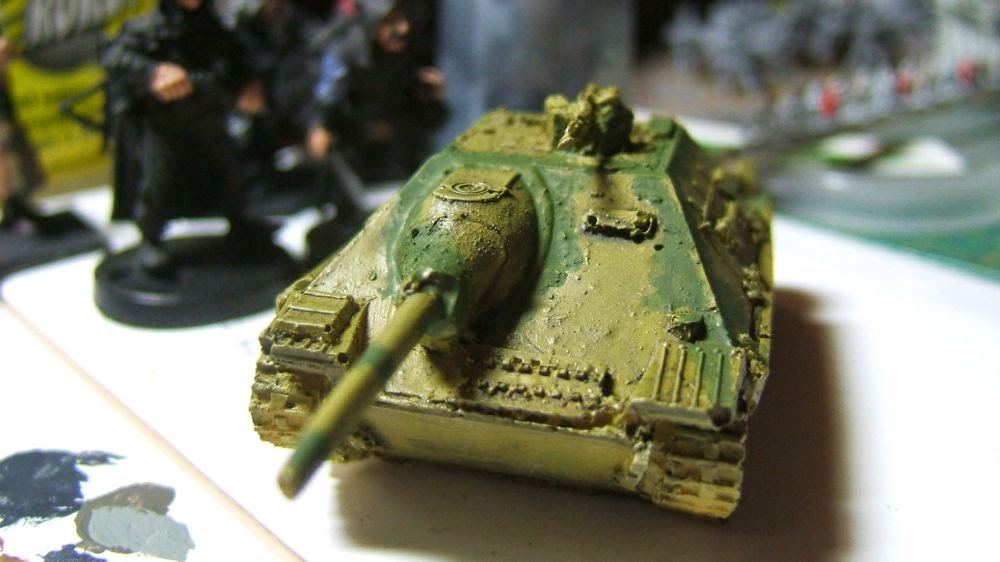 Some 6mm figures from Baccus that will be making an appearance throughout 2015. These will be used eventually for Command and Colours and L'Art de la Guerre. 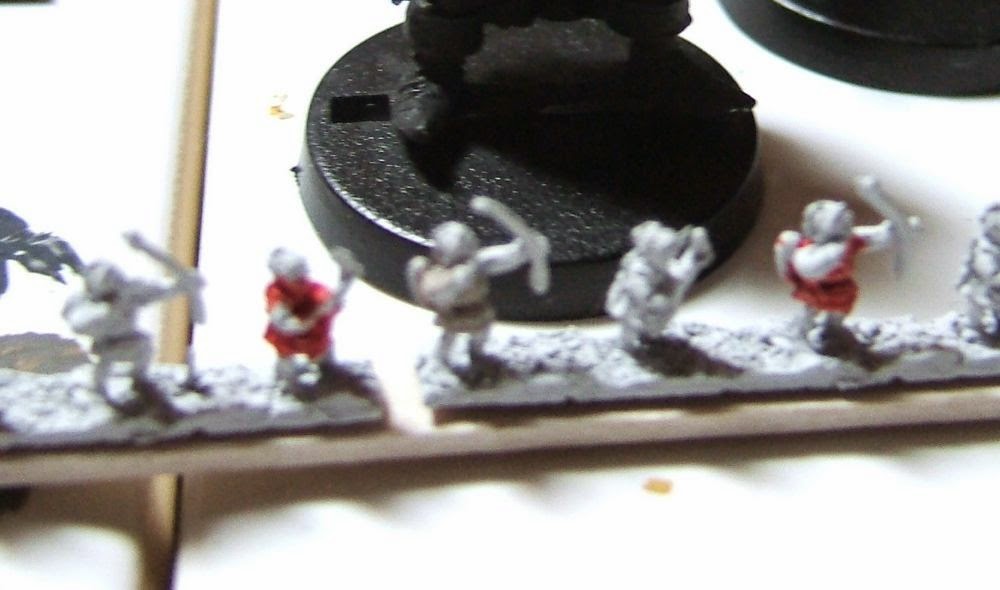 The last three pictures show the two places that all of this painting gets done. Apologies for the state of both. 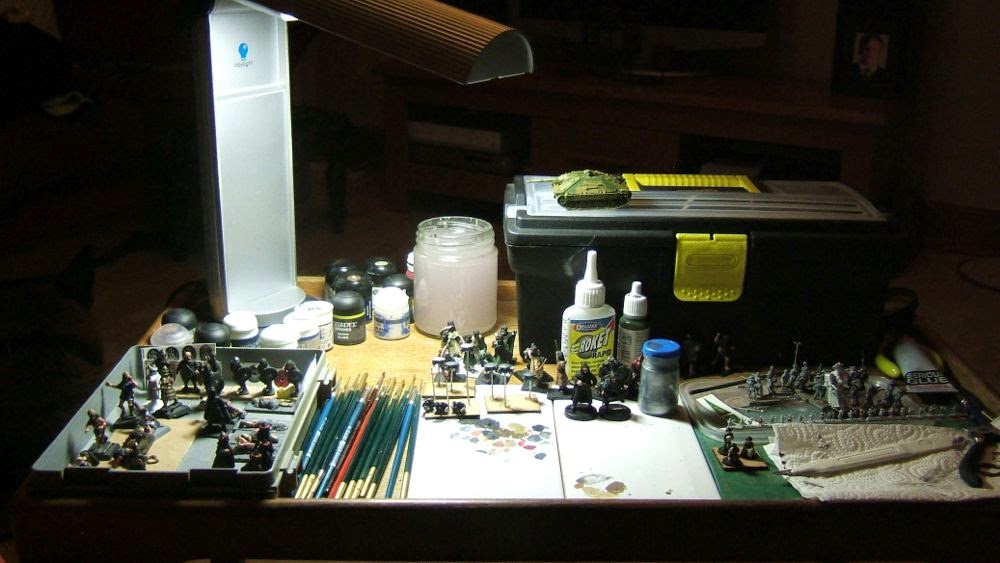 Above is the folding table paint station that allows regular progress to be made throughout the year. As you can see there is not much room so the paints are all stacked in toolboxes at the side of the table when its in use as shown below.


The picture below is the actual painting desk in the study - again in need of a right good tidy up. The close up below show a unit of five Huns that will be getting painted in the next few months, their leader having been painted for several years now. The figures are from Gripping Beast and will be used in Impetus. 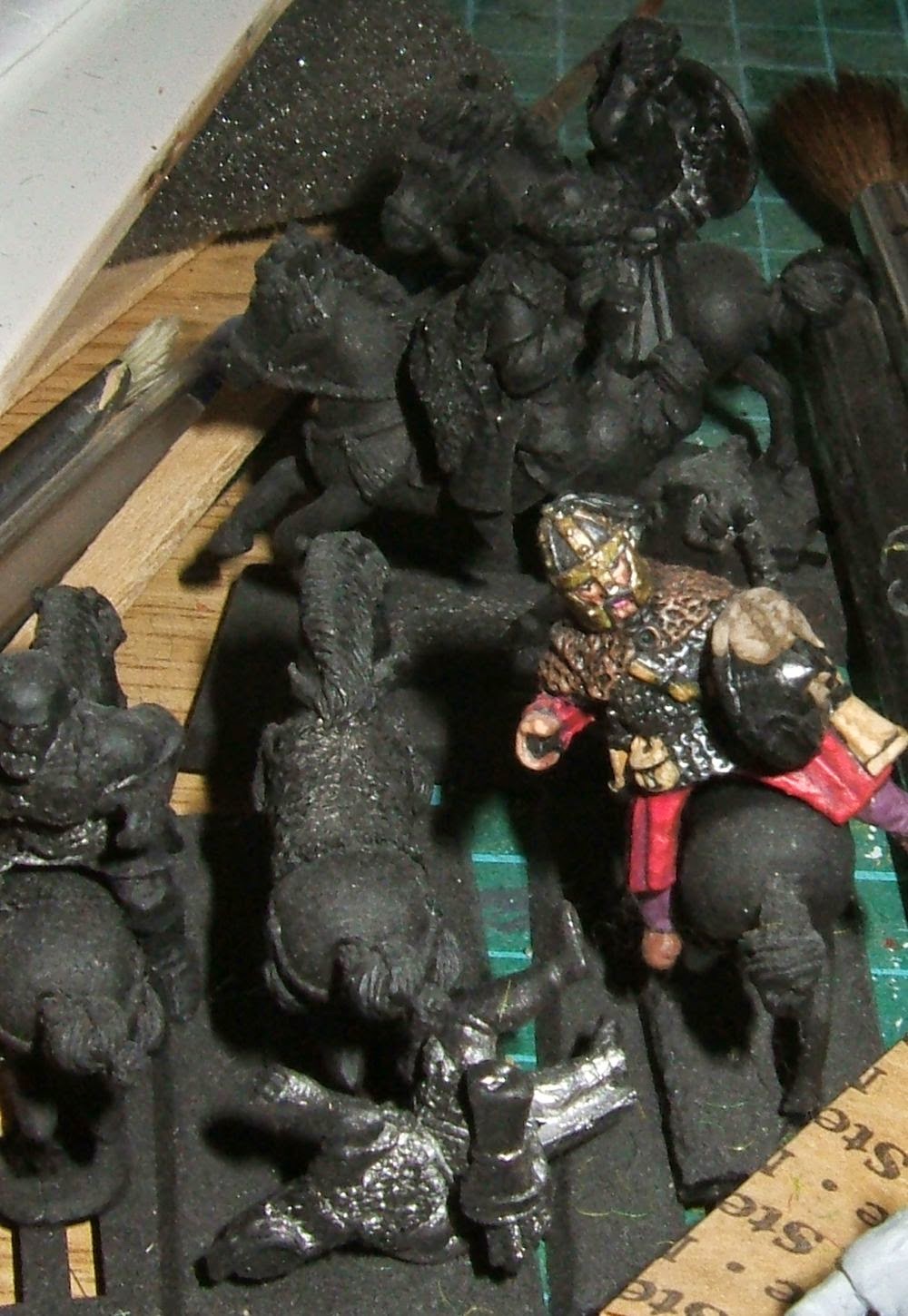 Now after all that chat about painting its time to go and actually do some.

Blood and Souls for my Lord Arioch

Here is the first a short number of posts that will centre around Citadel Chaos Warriors from the pre slotta era in the early eighties.

The title of the post comes from Elric himself, an original chaos warrior pledged to Arioch, Knight of the Swords and patron of Melnibone. If you haven't read Michael Moorcock's Elric saga then try and make the time to do so. 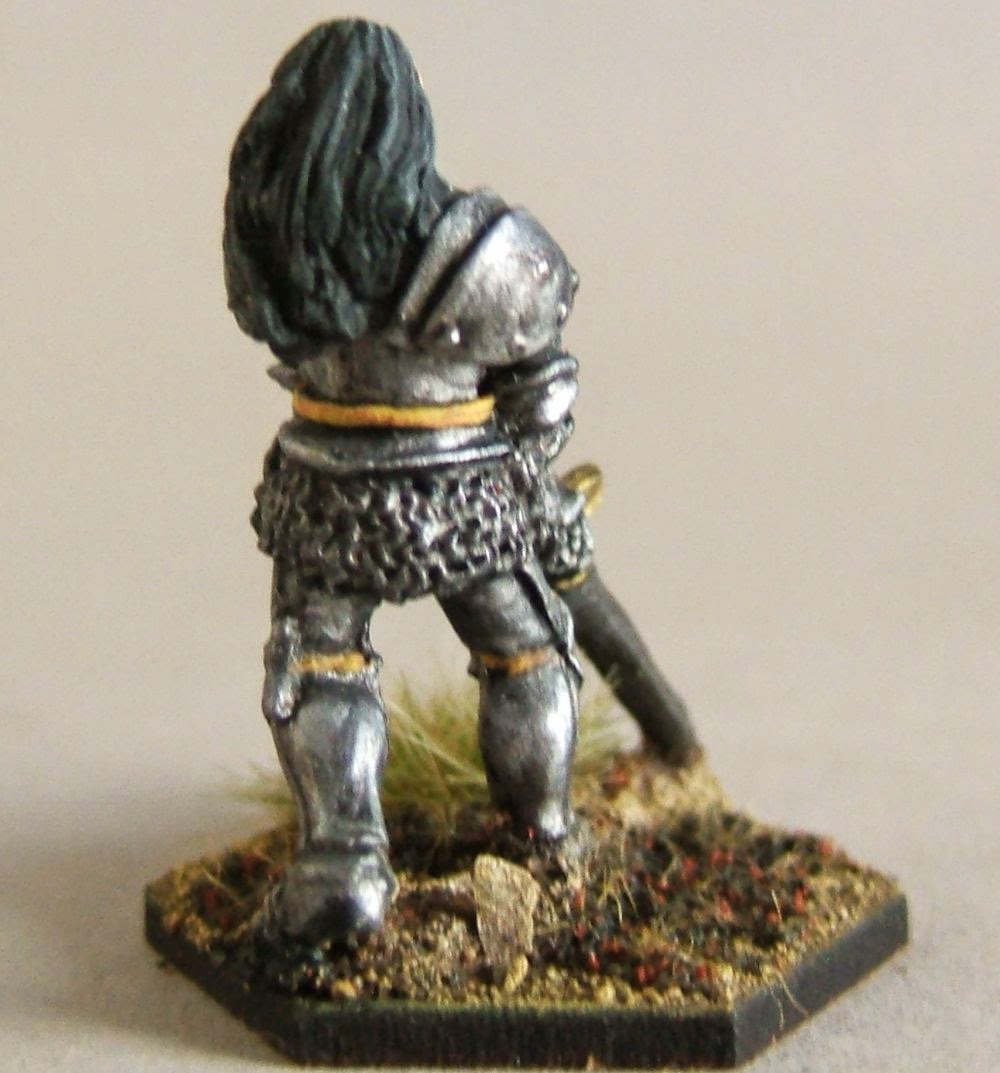 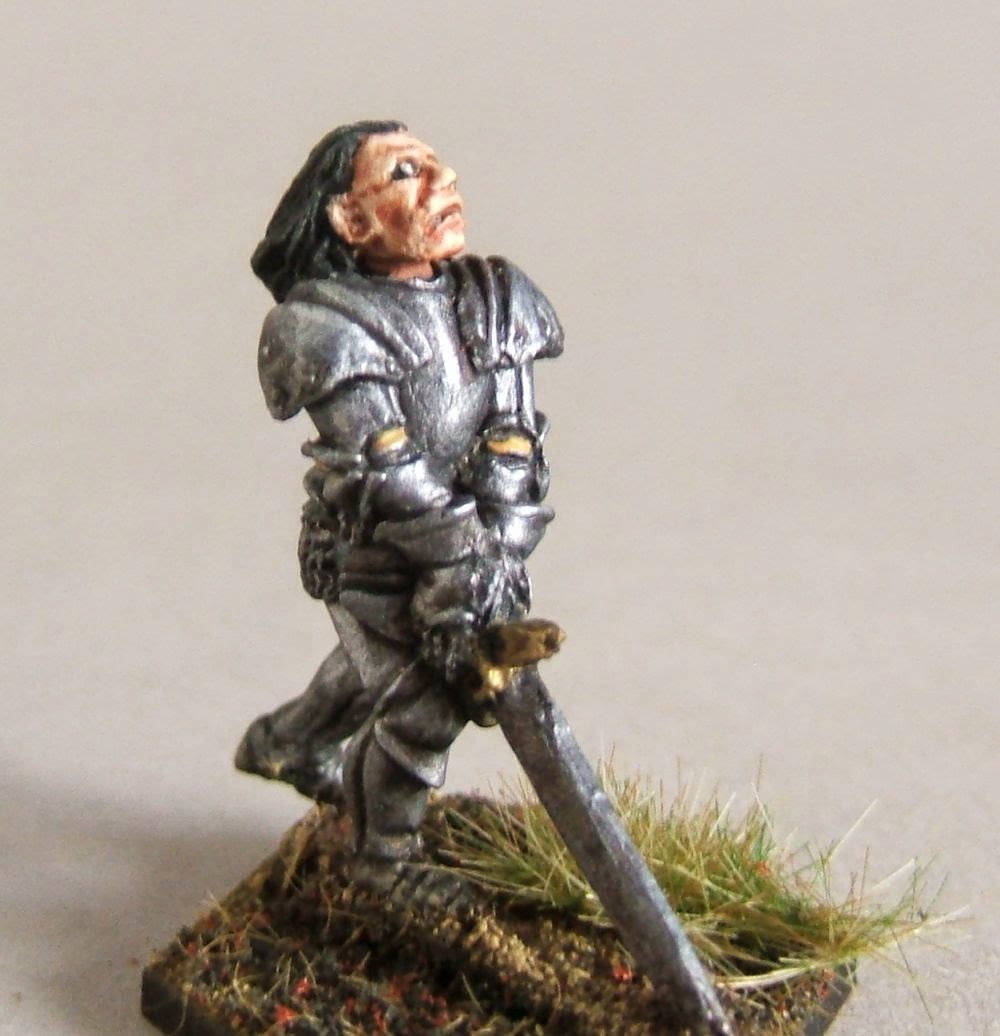 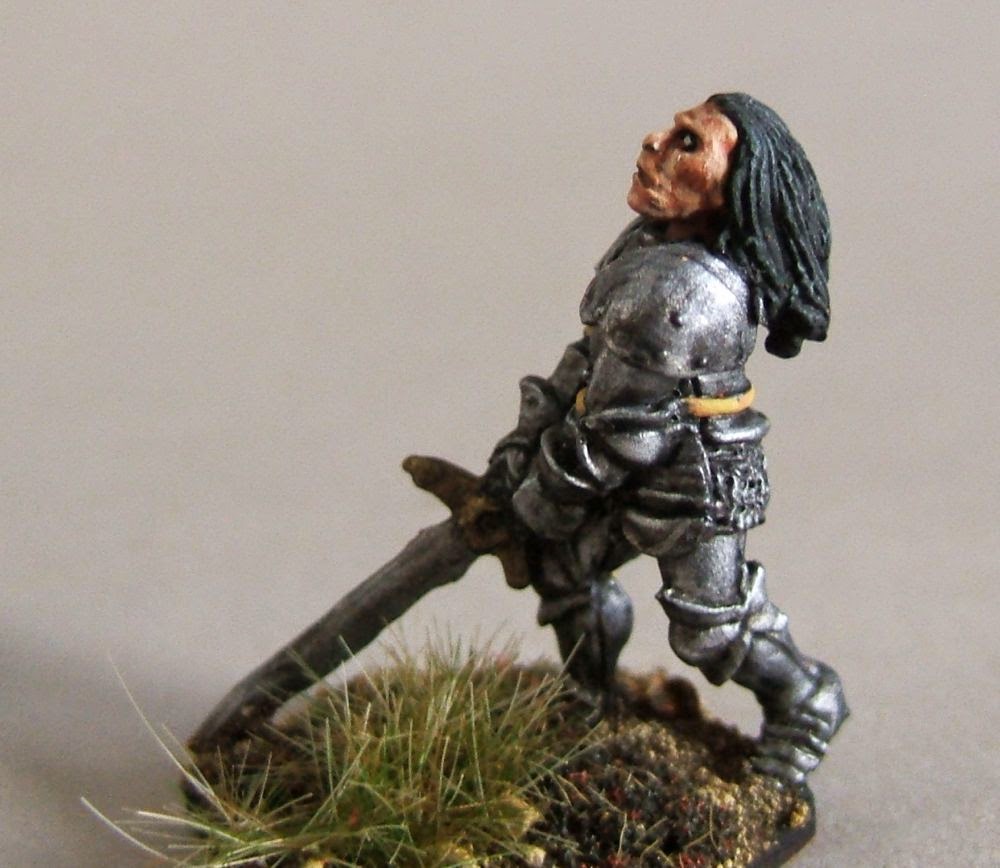 Both of these figures can be found in Citadel Compendium 2 and several others from this range will be appearing here soon. Still looking for a several of these figures to complete the set, so you know of anyone with some lead to move on leave a comment below. 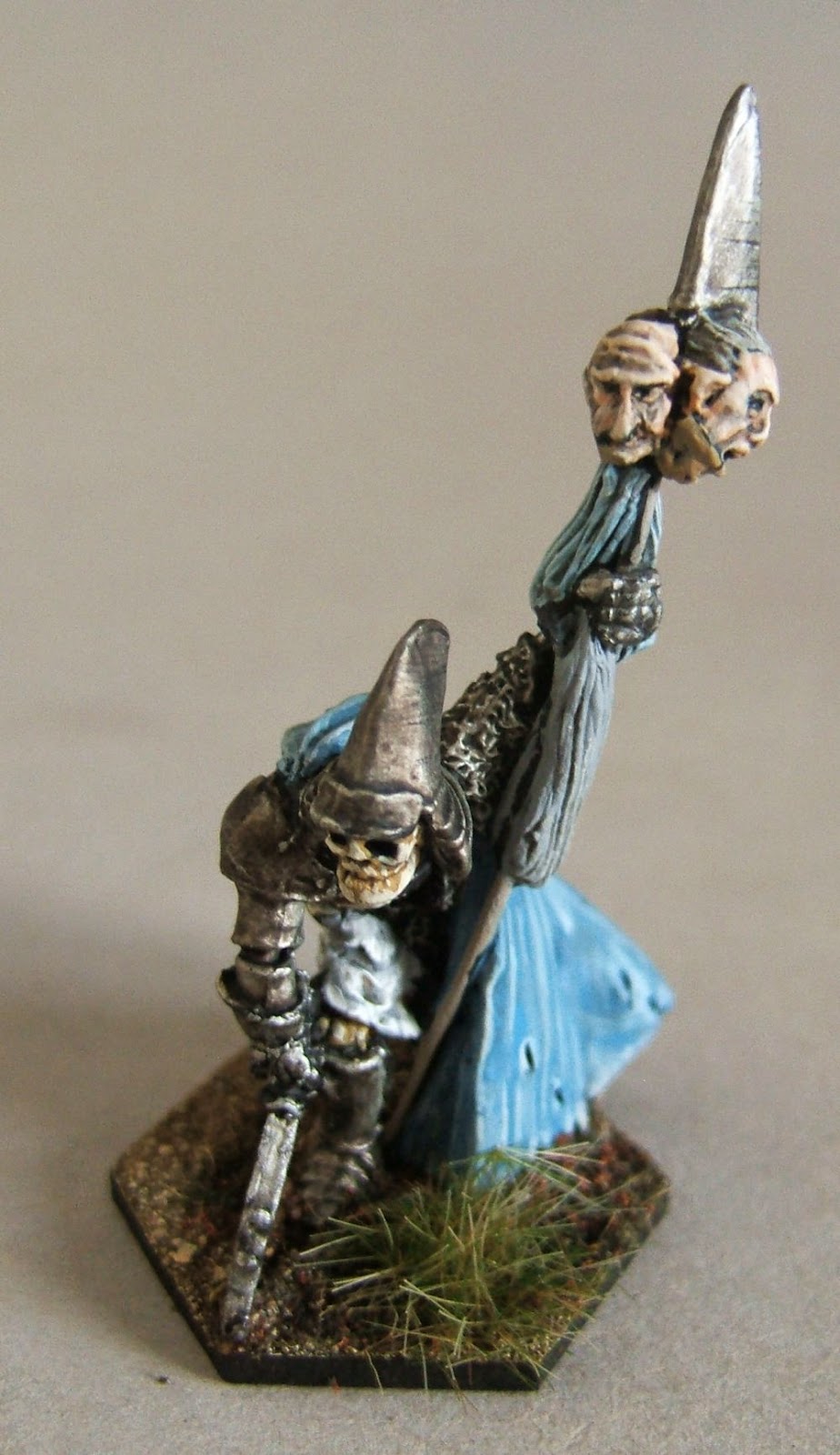 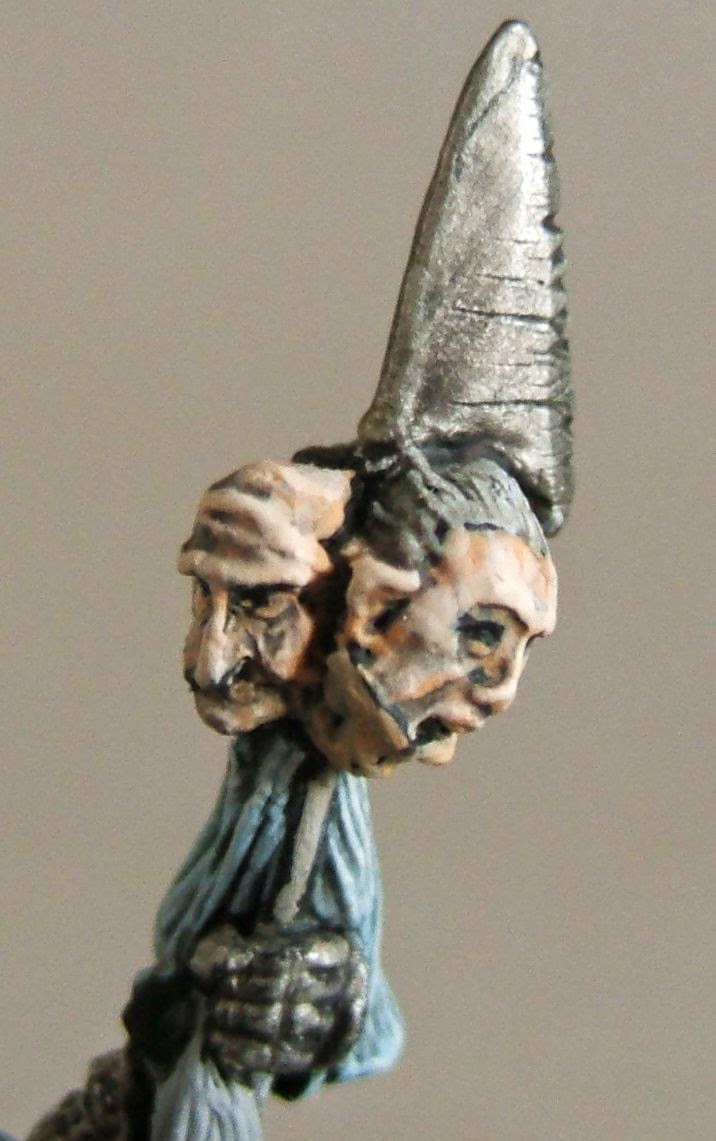 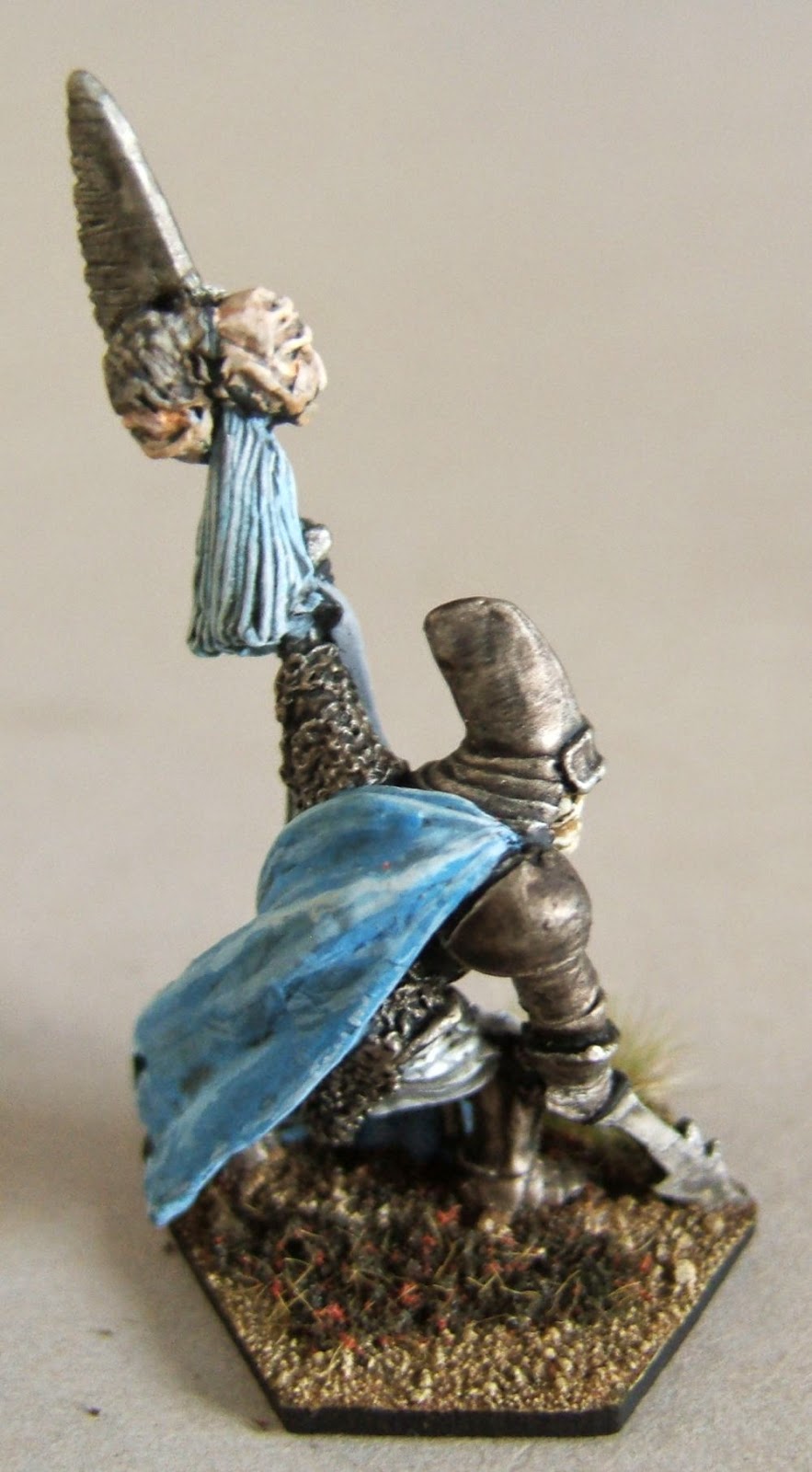 Next up will be more work in progress and something completely different.

Wishing you all the very best for 2015