The first of a small run of US Infantry that were part of a larger group that has moved on to pastures new. Sadly, nobody wants these in their grey primer; so here they are with a bit more colour to their backs. 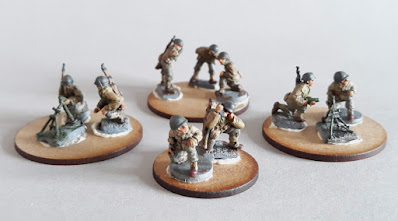 The set comprises of one spotter team, two 60mm mortars and one 4.2" mortar that requires said mortar. The bases have still to be done on these then, its texture, static grass and varnished before going back to the market with them. Once they are complete will post full pictures and a price so if anyone is interested...leave a comment.

These are also the first finished figures for June 2021

Stay safe and cheers for now.

May passed by in a flash leaving this 30 Days 30 Miniatures six figures short of the finish line. To say that there was a lot going on is an understatement however, that's passed now and its time to rise from the metaphorical ashes.

The pictures below show a mix of both scales and periods; starting with a few more terrain pieces for 28mm WW2. No idea who the manufacturer is for these which is a pity as rather like the single man sandbag emplacements.

The greying hut is from Hovel's ACW range although it could be used for any North American conflict from the French Indian War onwards. This is a part of a small farm set with the barn being the next piece to be painted.

Whilst this month, as in May, there have been no 28mm figures completed a few have been getting worked on in the sidelines. This leaves the 15mm figures from Museum Miniatures and Gladiator Games.

The Mongols from Museum Miniatures are the first completed figures for well, Mongol armies across the period of the Mongol Empire. Starting here with the first bow armed light cavalry and medium cavarly. 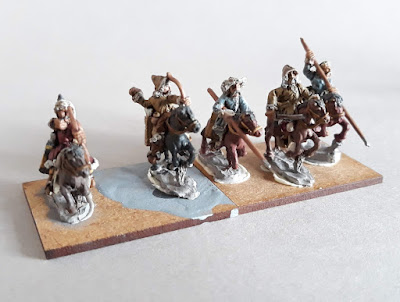 Next is the start of a second DBA army for the Late Crusader period and instead of representing a famous or infamous military order this time the figures are being painted for the Knights of Jerusalem. 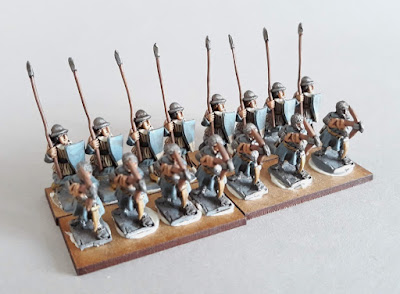 Still to find suitable decals for the shields etc for this army; not sure if there is a cross surround by 4 other crosses out there. If not will have to compromise with just the one. 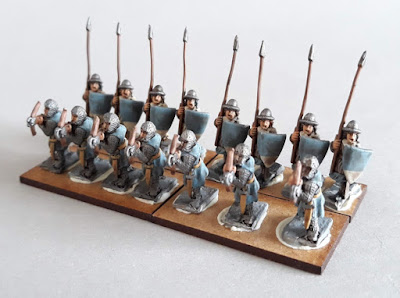 Although May and for that matter June have passed in a whirlwind did manage to complete 24 different miniatures.  Not close to that figure for June yet.
Cheers for now

Somewhere in amongst the Ultracast masses lurks a figure from the original Corvus Belli range. However, without the figures here to check for heft, there is no way of telling. 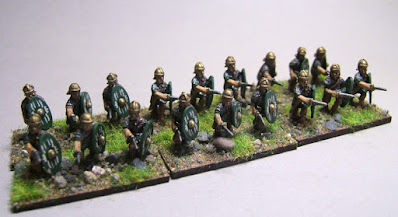 The shield decals are from VVV and reverting back to waterslide made the process much smoother than the rub on/offs from Little Big Men. Not as pretty mind you but certainly quicker and less fiddly. 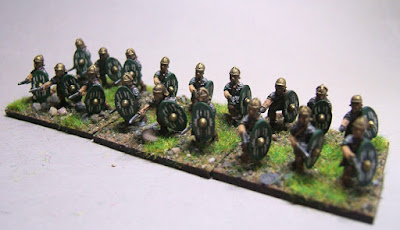 The bases have been covered with Geek Gaming Scenics base ready range then additional scenic scater added to brighten ever thing up. The block and wash method of painting used for these can leave the figures looking a bit sombre. 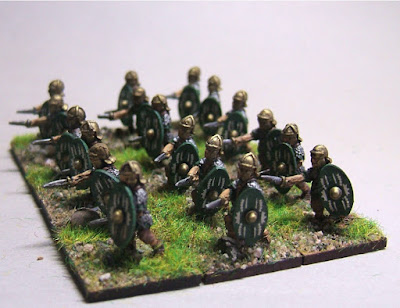 Need to pick up the pace on this army and start on the legionnaires and cavalry. There may be an opportunity to paint a bit more in the next few weeks so will see what comes of it.
Hope you found this interesting and stay safe.
Cheers for now
Posted by roma912 at 20:30 4 comments:

A quick pic to show the start of the Knights of Gondor for Dragon Rampant and fantasy skirmish in general.

The above along with three other horses still to be primed saw some virtual action at the weekend. The game was an introductory session to Dragon Rampant for all involve and as host a huge learning curve as well.

Running a game through zoom on a tablet is challenging but fun all the same. Can see now why people have invested in web cams to help out with this and if lock down returns then might do the same here.

Might look at sabot style basing for these as well for Hordes of the Things.

Looking forward to getting moving on these, the first real painting done this month! Is it possible to complete 30 figures in 13 days, we'll see.

Stay safe and cheers for now