As November 2011 comes to an end and the year draws to a close it's is time to look at the coming months with a view to starting a new project. This year started with plans and talk of undertaking a "Rise of Macedon" army for late Philip or early Alexander and this is still likely of happening but later in 2012. The Spartans are so very nearly completed with only a few more stands required for the full 400 point army under the new list so no major change of plans there.


The main thrust of early 2012 will be to start a 300 point Mycenean/Trojan army for Impetus. The starting point for this will of course be The Illiad itself and the following quote sets the scene for the first two stands of the army; a chariot and heavy foot stand:


The Trojans, on the other side upon the rising slope of the plain, were gathered round great Hector, noble Polydamas, Aeneas who was honoured by the Trojans like an immortal, and the three sons of Antenor, Polybus, Agenor, and young Acamas beauteous as a god. Hector's round shield showed in the front rank, and as some baneful star that shines for a moment through a rent in the clouds and is again hidden beneath them; even so was Hector now seen in the front ranks and now again in the hindermost, and his bronze armour gleamed like the lightning of aegis-bearing Jove.
The plan is for each character from Homer's epic to have a foot stand and where possible a chariot as well. This will give the army a heroic feel which relates to the primary source as well as defining the opposing sides by character figures and scenes from the epic. Work has already started on the first stand and chariot for Hector and here are a few working progress pictures to start with. All figures are from Redoubt Miniatures.
A constant reference throughout this project will be Peter Connolly's book as below and needless to say there will be no red in this: 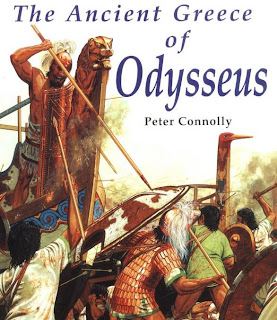 Before this entry is finished a belated welcome to:


Hopefully you will find some of the ravings here of use.
Cheers for now
Posted by roma912 at 17:10 5 comments:

Well where to start, last weekend saw the Spartans take the field for the first time in a competitive game and for that matter as a finished force and my prediction came true as the wooden spoon is mine, all mine :). To be fair I had 3 very good games and enjoyed them all in different ways.

Game 1 against Crusaders was going to be hard from the very start; when your facing 6 units of crossbows and 4 short bows with 2 light cavalry and 3 Impetuous Heavy cavalry to back them up you know your in for a tough time. So the Spartans fought in the shade to start of with. In-discipline in the ranks broke the battle line as it progressed through the arrow storm, during which time the right flank evaporated under the pressure of the combined skirmishers and light cavalry allowing the Crusaders the opportunity to flank the main phalanx. When the battle line finally clashed the Crusaders held - the dice god was not in my camp at this point - and the Crusaders then released their Knights. The Spartans held them for a while but the flanking lights brought in the end. Overall a very good game and a fair introduction to Impetus.

Game 2 against Carthage was also going to be hard. 4 units of cavalry on the extreme left, with elephants and Spanish light infantry over on the right. I had decided to split my line and hold the left with skirmishers, 1 phalanx and my only unit of cavalry. The rest went forward to clash with the Spanish. Again in-discipline on the left caused problems and a failed charge didn't help matters. The evasion from light cavalry changes a lot from BI. 1 Phalanx held up the elephants whilst the other 2 clashed against the Spanish with support from a unit of peltasts on the far right, yet again I couldn't wear the main line down and it all went horribly wrong from there.

Game 3 against the Huns was just painful and the Spartan's fought in the shade yet again. The Hun player had 2 warbands which were my main target and a good combat ensued there. However, against such a mobile and bow armed force I was always going to struggle. Again the holding force on the right this time dwindled away too quickly and with the loose of 1 phalanx on the left to missile fire very quickly it was over very quickly.

The Spartans are a good army to play with but lacked enough missile troops and  cavalry to hold their flanks long enough for the phalanx to do its job against this opposition. In games 1 & 3 I couldn't just sit there as I would have just been whittled away with no means of replying. Game 2 I could have done so but counted on the phalanx beating the Spanish - which they should have done - allowing me to turn the flank and centre.

Overall Impetus is a good game which has more to offer than BI, not that I am saying I'll stop playing BI as I won't. Things to look out for are evasion, counter charge, skirmishers dispersing when contacted and opportunity charges.
Forgetting a few minor changes in the cohesion test - which is slightly different - doesn't help either.

The day itself was very good with a friendly bunch of guys from Falkirk, Kincardine and Fife. There are already plans for 4 games next year and I'm going to go back after all I don't want to stay at equal 98th in the world rankings for ever :)


Unfortunately, there are no pictures of the day as the camera was on the blink.
Cheers
Posted by roma912 at 07:50 1 comment:

in the last 10 days 38 Spartans have left the painting table and are now ready for use. Here are a few quick pics of the final work in progress 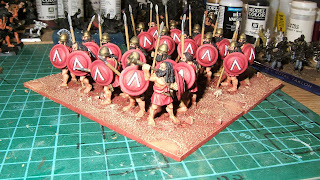 Dulce Et Decorum Est
Bent double, like old beggars under sacks,
Knock-kneed, coughing like hags, we cursed through sludge,
Till on the haunting flares we turned our backs
And towards our distant rest began to trudge.
Men marched asleep. Many had lost their boots
But limped on, blood-shod. All went lame; all blind;
Drunk with fatigue; deaf even to the hoots
Of disappointed shells that dropped behind.
GAS! Gas! Quick, boys!-- An ecstasy of fumbling,
Fitting the clumsy helmets just in time;
But someone still was yelling out and stumbling
And floundering like a man in fire or lime.--
Dim, through the misty panes and thick green light
As under a green sea, I saw him drowning.
In all my dreams, before my helpless sight,
He plunges at me, guttering, choking, drowning.
If in some smothering dreams you too could pace
Behind the wagon that we flung him in,
And watch the white eyes writhing in his face,
His hanging face, like a devil's sick of sin;
If you could hear, at every jolt, the blood
Come gargling from the froth-corrupted lungs,
Obscene as cancer, bitter as the cud
Of vile, incurable sores on innocent tongues,--
My friend, you would not tell with such high zest
To children ardent for some desperate glory,
The old Lie: Dulce et decorum est
Pro patria mori.
Wilfred Owen
Nothing else for just know, more updates to follow over the next few days
Posted by roma912 at 20:56 1 comment: