Just when you thought it was safe to look about miniature galleries and websites, Gripping Beast announce yet another new range; The Timurids. Whilst not a period that carries much interest at present, with teasers like this elephant, that could change. 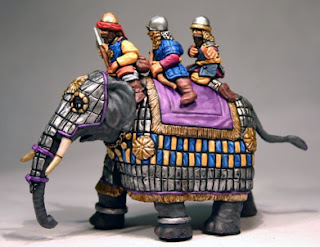 Please note the above pic is from a GB newsletter and unfortunately not painted by me
The trades have started to arrive and the Seleucid planned army is now complete, with few figures left over for some other bases in the future to expand to a full Impetus army.

Still working away at the Spartan cavalry and the last figure on the Odalsbondi stand for the Vikings. Pictures to follow in the next few days.

At present nearly all spare time is being eaten up by studies, so not really much to add from the last post. A little brush work on another Viking and some more red for the Spartan cavalry.

That aside several good games of Basic Impetus at the club on Sunday, winning and losing as well. Yet another few things learnt about the game in the process of the afternoon's gaming.

A few packs of Redoubt swordsmen have been ordered to mix the infantry units of the planned Trojan/Mycenean armies up a bit. The surplus will also make go towards the swordsmen units for the full Impetus army if the project progresses that far.

A few trades should be completed soon which will see the completion of the Late Macedonian and Seleucid plans. Not really reducing the lead mountain, more changing it to something that will be painted. The remaining surplus will be going on eBay shortly.

Hopefully, there will be a bit more progress on both studies and painting in the next few weeks. More so the studying to be honest; as the deadline clock is ticking faintly in the background.

A change is as good as a rest

Just a few pics of some alternative bases that are on the painting table at present.

Firstly, some Vikings from the Odalsbondi base for the Basic Impetus army: 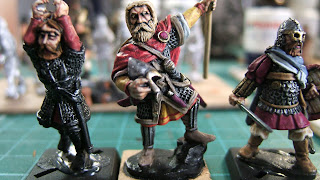 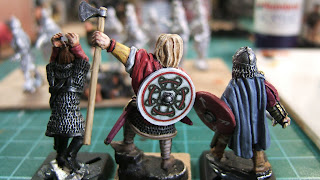 The figure to the left of the top picture is still being worked on as are another 2 to complete the base. The figures are from Gripping Beasts Varangian Guard and Heroes of the Viking Age ranges with the centre figure being Harald Hardradda. The shield design is a transfer from Little Big Men and the runes to the right are hand painted. 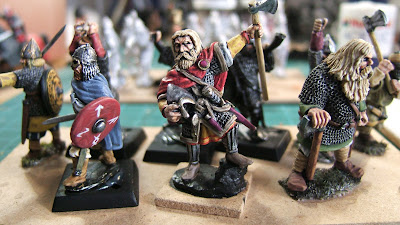 The figures with the others from the same base; which includes Gripping Beast Jomsvikings, Rus and a giant figure from Foundry to the left of Hardradda.
The next pics are of a project that has materialised out of reading David Gemmell's triology on Troy. The Trojan War along with Greek Mythology and the Wars of the Greeks have been an interest since childhood. To be honest they really are the root cause for painting and gaming. After reading the Gemmell books' the idea of creating an Impetus army came to mind and after looking at the figures and working out that it was possible a base was started.
The figures have been languishing in the lead mountain for some time so this will bring them out and give them a use. The base below includes a victorious Hector and each of the other bases will also include a hero from the Homer's classic. This is one of the great things about the Redoubt Miniatures range; each of the main heroes are there for both sides.
Obviously, this base is only in the planning stages at present but the painting of the army is eagerly anticipated for two reasons. Firstly the subject is a firm favourite and secondly; the primary colour of the army will most certainly not be red. Anyway enough rambling here are the pics: 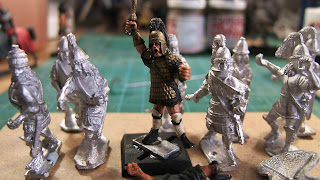 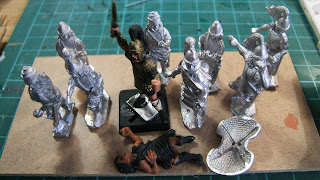 That's all for now as its back to work and Spartans for the next while.
Cheers
Posted by roma912 at 12:28 No comments:

Chipping away at the Lead Mountain

The decision has been made, the figures sorted and shortly there will be some less lead in the mountain. The following figures all from Foundry will be up for sale in the near future:


All of the figures are either unpainted or undercoated in  black or grey spray primer. If anybody is interested send a message.
The main reason for making this decision is due to the change of gaming systems from WAB to Impetus, meaning less figures are required to field an army.
The second reason is purely to do with time. Based on painting for approximately 30 minutes a day and taking about 2 hours per figure - not the world's fastest painter - the figures above would take roughly 18 complete days to paint. This based off 30 minutes a day equals almost 2 and half years worth of painting time. Its quite scary when worked out like that when you add in real life and work as well, it would be closer to double that time.
The last reason is a change in interests in gaming the Fall of Rome and Dark Ages to gaming The Trojan War, The Greek City states, Macedonia and the Successors - the above Greeks are surplus to requirements as there is the same amount of Foundry World of Greeks waiting to be painted.
All that said there has been very little paint moved about this week, although a Viking was completed the other day during a lunch break. Sort of goes against what has just been said there, but just needed a change from Spartans and red for a little while.
Pictures to follow shortly time permitting.
Thats all for now
Posted by roma912 at 12:01 No comments: