There is Darkness there that never sleeps.

Here is the first of a new series of posts relating solely to the painting of warbands for use in Dragon Rampant set in Middle Earth. The title is from Tolkien and said by Boromir during the Council of Elrond.

The first post show the first unit of swordsmen for a Gondorian warband that is currently being painted.

The swordsmen were originally purchased not long after the release of the Return of the King film in 2003/4 so they have waited a long time to see the business end of a brush. 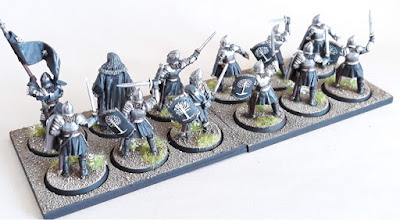 Also included are a Captain, Denethor Steward of Gondor, a Standard Bearer and a veteran swordsman just behind the captain 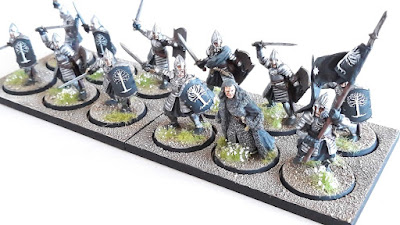 At this point the sabots have no scenic grass or tufts added however this will change to break up the black edges you can see on the figures as the sabots are not deep enough. (3mm needed not 2mm).

In game terms for Dragon Rampant these will be classed as Heavy Foot with no ability to form a wall of spears. If Denethor was with the unit they would be classed as Elite Heavy Foot.

Have enjoyed painting these figures and there will be more of the same during the coming weeks along with a few other things from here and there. 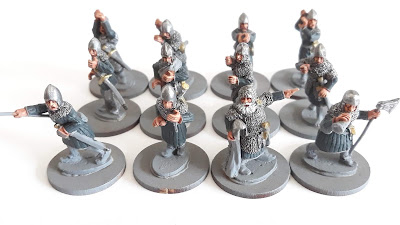 These will be used to represent the men of Forlong the Fat from Lord of the Rings - Return of the King, Book Five, Chapter 1 Minas Tirith

Forlong has come,' Bergil answered; 'old Forlong the Fat, the Lord of Lossarnach.... Hurrah! Here he is. Good old Forlong!'

"Leading the line there came walking a big thick-limbed horse, and on it sat a man of wide shoulders and huge girth, but old and grey-bearded, yet mail-clad and black-helmed and bearing a long heavy spear. Behind him marched proudly a dusty line of men, well-armed and bearing great battle-axes; grim-faced they were, and shorter and somewhat swarthier than any men that Pippin had yet seen in Gondor.

'Forlong!' men shouted. 'True heart, true friend! Forlong!' But when the men of Lossarnach had passed they muttered: 'So few! Two hundreds, what are they? We hoped for ten times the number. That will be the new tidings of the black fleet. They are sparing only a tithe of their strength.' "

Great figures with a lot of character and they fit the description better than the GW figures of the same name. Will darken Furlong's helm to a near black later on today.

In game terms these will be a unit of Bellicose Foot with the Shiny armour upgrade.

Hope this has been of interest to you

Second post for the Caesarian Romans and this time it is the command stands. 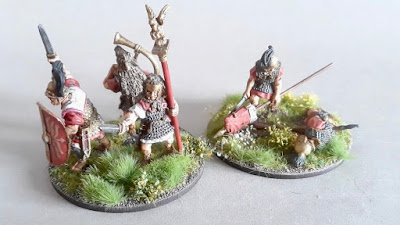 Unlike the first post for this army, these figures are from Warlord Games and are truly huge in comparison to the Gripping Beast figures. Would say that these are heroic scale 28mm figures and whilst well sculpted they are too big to mix in with the others. 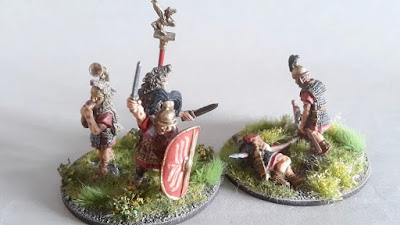 The image on the shield is hand painted and would only do this for a single figure. Whilst not impossible to do for a few wouldn't want to do this for a unit or group of units. 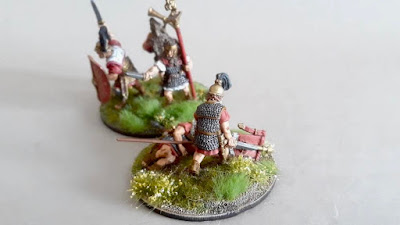 Things aren't going to well for this command stand with one down and the other nearly out. The vexillum is an addition to the figure to show the command status. 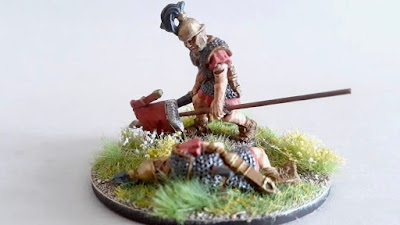 The shield and the "casualty" figures were painted in the AHPC X the other two earlier in 2019. 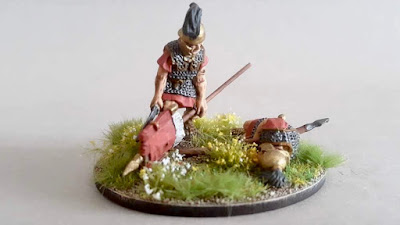 There will be more from this army in the coming weeks of lockdown; hope you found this interesting.

For the last nine months there has been a slow and steady progress on an army of Caesarian Romans from Gripping Beast.

These figures are currently out of production which is a shame as they are in my opinion great sculpts.

The first unit shown here is actually the last to be completed and it recently appeared in the AHPC X. 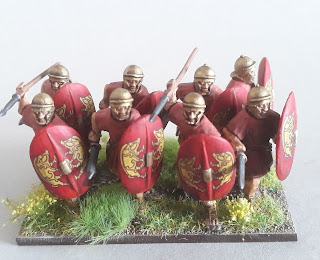 This cohort depicts that of a recently raised legion or a penal legion. Transfers are from the excellent range from Little Big Men. 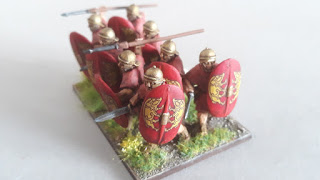 The figures have been painted using the "speed painting" method of block, wash and highlight. 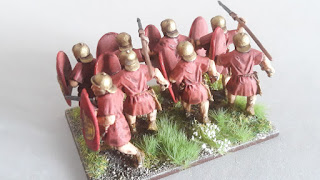 The highlight in this case is the same colour as the base tone: Foundry Scarlet A. 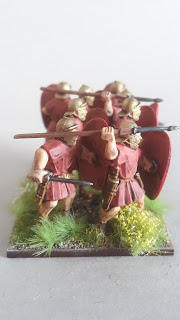 Hope that you find this of interest.

Something new from something old; Men of Gondor for Dragon Rampant. 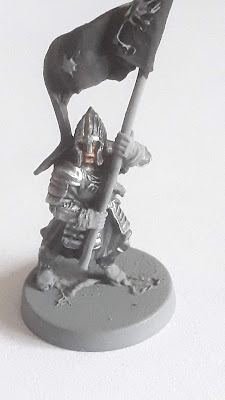 The test figure for the first group of swordsmen is nearly completed. With the bulk of the detail lying in the armour have opted to paint this as follows: 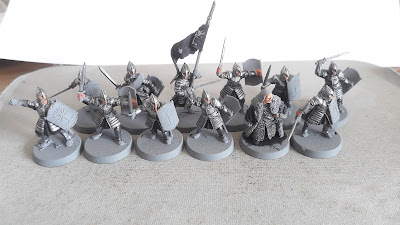 The whole group as work in progress including Denethor, a Captain and the standard bearer above.


The first two sections of the D.A.K infantry platoon recently completed in the AHPC X.  The figures are from SHQ again and there are a couple of rogues in the second squad that shouldn't be there. Call it artistic licence if you will. 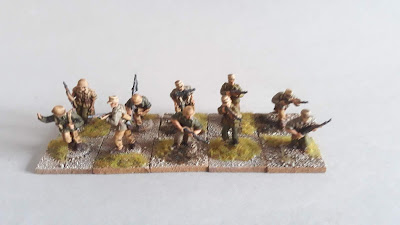 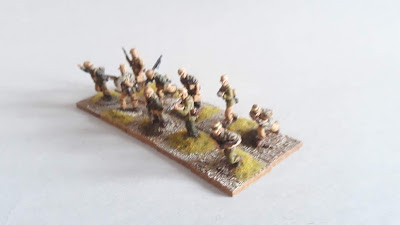 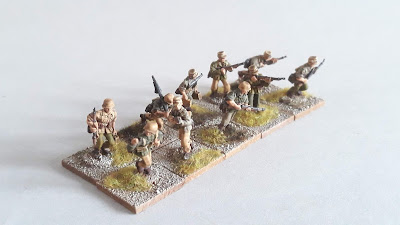 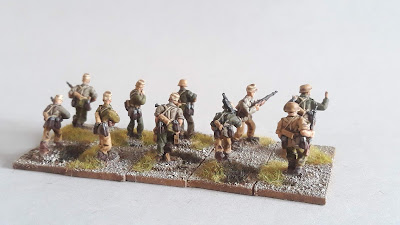 The Panzerfaust armed trooper is an extra to be added in if required as a support option. 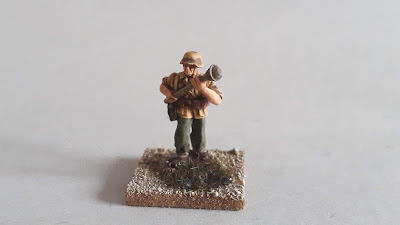 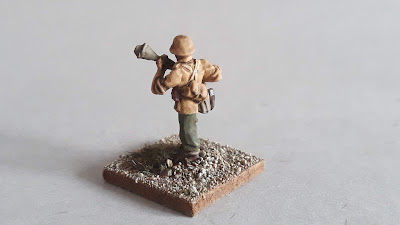 The second squad is actually the first squad of a pioneer platoon as full support option for the main platoon. This will be smaller in number however there will be additional extras as they are pioneers. 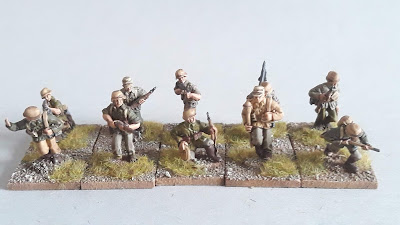 The rogues are in this squad and although in the same colours there are differences with their uniform that are visible if you are willing to look closely. 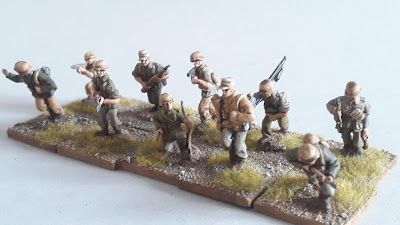 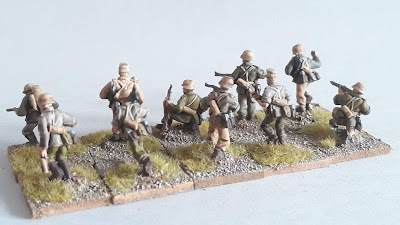 Thanks for looking off to continue painting another squad of the very same for the QC2020.

Support stands for the D.A.K in 20mm from SHQ Miniatures. 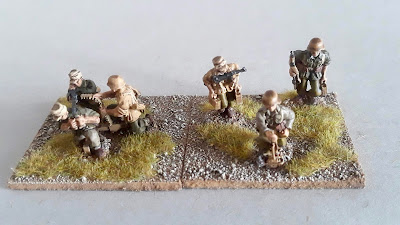 SHQ have been the go to company for 20mm figures for myself for the last 16 plus years and although slender the figures have stood the test of time well. IMHO that is. 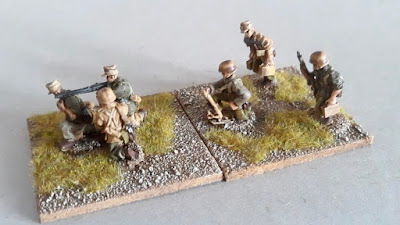 A the rear a 50mm mortar and crew. Production stopped for this mortar in 1941 and it was removed from frontline service during 1942. However, the Granatwerfer 36 remained popular until the end of the war with second line units although ammo did present issues in the late war period. 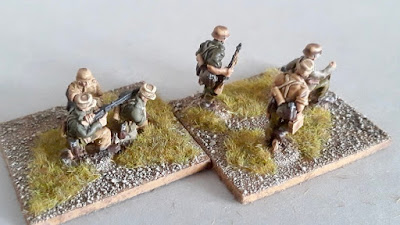 Also here is the backbone of the German infantry section - the MG 34 or MG40 if mid to late war.  Often considered the most advanced machine gun of its era, it was replaced by the MG40 due easier production of the MG40 over the MG 34.