I have made some changes to the layout of the blog, whilst trying to familiarise myself with the workings of Blogger. If all seems straight forward enough at present.
Posted by roma912 at 13:22 No comments:

Summertime and Work in Process

Well the sun is shining here and I should be working outside getting the windows painted but its too hot for that. So, I have added a few more pics to my flicker showing some work in progress at the moment. I am sort of fluttering from one period to another just now with the following on the painting table:

Foundry Spartans
Front rank of the third phalanx is well under way now. I have been having a bit of a problem with the faces on these figures, not sure if it is the beards or just me. We'll see on the next five although I recon it's me. 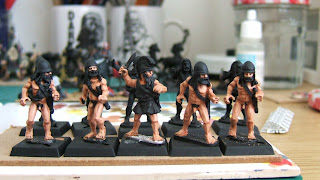 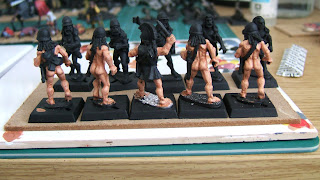 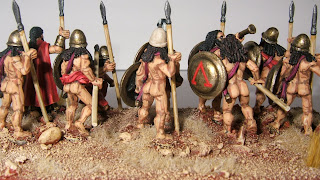 The last pic is from a previous batch where the flesh was painted using the following combination of Foundry Paints; Spearshaft Brown B, Flesh C, Flesh B. This gives a good result in my opinion, but I am always looking for better flesh colours.


The 2 pics from the WIP have been painted using the Foundry triad for Mediterranean Flesh. I initially thought this was going to be a bit too orange in colour but once all 3 layers are down, I am actually very pleased with the result. 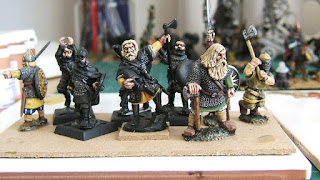 I have been painting this base on and off since January. The figures are all Gripping Beast apart from the  Hirdman leaning on the axe to the left of the Harald Hardradda figure which is a Foundry Hirdman I picked up a Claymore about 3 years ago for 50p.
Gripping Beast Crusaders 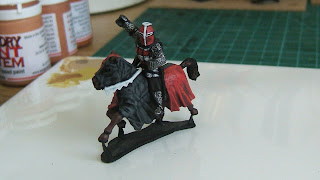 This figure has been on the painting table for too long now, so its time to finish him off. I am basing a Impetus army from EI2 on the Knights of St John circa 1260 using the Later Crusades list. In order to do this I will field the Knights as Military Order and the Sergeants as Crusaders Knights. This will allow me to paint the Knights in red tabbards and the sergeants in black which will hopefully reduce the time required to paint as well as individual heraldic devices. As this is a command figure I have opted to split the colours on the barding of the horse to reflect the two elements of the order.
Perry Casualty Markers 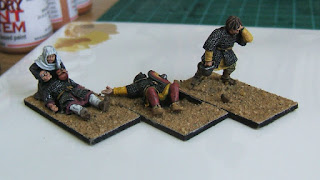 After mixing dice from casualty markers with dice in play in my earlier games of Basic Impetus I picked up some casualty figures from Perry Miniatures. Whilst from their early Crusades range the figures will mix in well with most Dark Age to Early Medieval periods. Not so sure they'll look the part next to the Spartans though :)
Thats all for now
Posted by roma912 at 12:02 No comments: 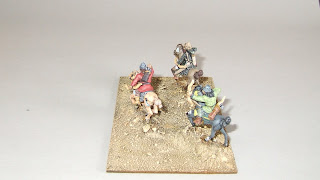 Here are a few pics of the first unit of Hun Light cavalry. 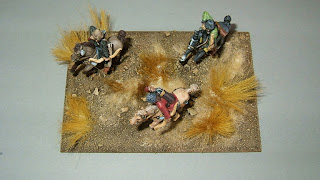 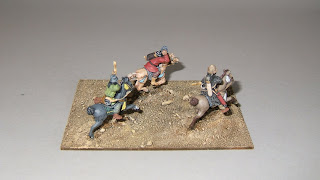 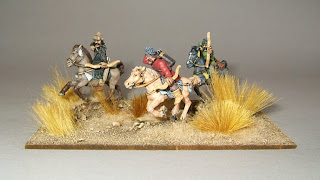 Well, after a slight delay that's the first base of Huns varnished. They'll hopefully get their first outing tomorrow afternoon at the club in a Patrician Roman army. Pictures and flocking still to follow.


I have also been working on some 20mm scenery from Hovels over the last few days for use in Disposable Heroes and other skirmish games in WW2. This has been taking up space for some time now and has been an enjoyable change - I don't generally do dry-brushing but its perfect for these items.


I'll get back on to the third base of Spartans now and hopefully get these ready for the next few weeks. They are already undercoated black and five have had the flesh blocked in. I am trying out one of the new Foundry Flesh tones on this base - Mediterranean Flesh. I initially thought it a bit orange but it seems okay once all three layers are down.
Posted by roma912 at 15:15 No comments:

The sun is shining and I have to go to work. There is no justice as the day will be slow because the weather is so good. Catch 22 I am afraid.


I am just about finished the first base of Huns, which at this stage will be mercenaries for my Late Roman Army, and in time be a part of their own army.


I'll post a picture of them pre basing just as soon as possible.
Posted by roma912 at 12:26 No comments:

The Spartan army for Basic Impetus consists of the following units:


I have already started this army and have painted the General's stand, 1 stand of hoplites and a stand of bow armed skirmishers.


From what I know about Impetus, Hoplite warfare is going to work better and be more balanced. I'll just have to remember and watch those flanks.


Anyway, here's some pictures of the painted bases so far. 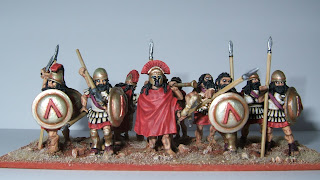 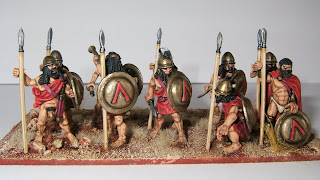 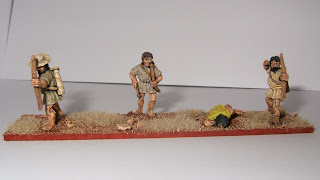 Sorry, not the best pictures in the world, but this is all a learning curve for me.

A third unit of Hoplites is on the painting table and I should be back to them after finishing the first base of Huns this week, hopefully.
Posted by roma912 at 16:31 No comments:

A beginning is a very delicate time.

To try and encourage me to continue to paint units for the following armies I have created this blog:


All of the armies are in 28mm scale and are for the game Impetus, primarily for the Basic Game but possibly for the full game as well.


Each army roughly consists of 10 bases, although the Spartan army has only 7 bases. This is one of the reasons I enjoy Basic Impetus, the painting of a new army does not fill me completely with dread. The base approach enables me to swap between forces easily and still progress. This keeps the painting fresh and hopefully will enable me to keep moving forward with each army base by base.


At present there is a fair bit of noise and banging going on as our boiler is being replaced so doubtful I'll get much done today. I will however, put details of each army on the blog over the next few days.
Posted by roma912 at 12:37 2 comments: