Fury of the North 16

The two figures from Gripping Beast shown below where painted circa 2003 for a Rohan project that never passed go. Both figures were part of the command structure of the forces planned for the Rohirrim foot. 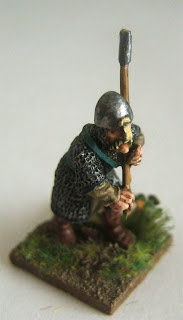 An interesting choice of colour for the weapon's belt and scabbard, not a colour that would be used for those items now. At this point most of the figures painted would have been used for fantasy skirmish games and these are possibly some of the first pure historical figures painted. 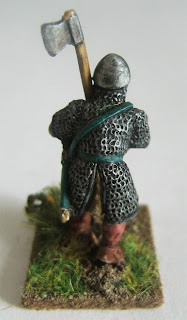 The axe bearing figure was to be a standard bearer, which was recently replaced with the Dane axe allowing the figure to be tucked into a SAGA warband or similar Dark Ages skirmish game. 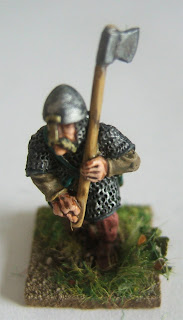 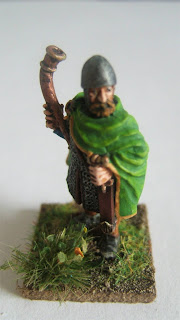 The musician/horn blower will also be added into the SAGA warband, however will he be more conspicuous than his axe wielding colleague. 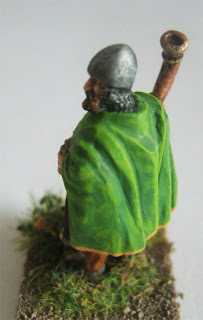 The cloak above was painted in Dallimore's layering approach; this being an early example of this style being used here. Prior to then it would have been wet blending when time allowed or dry brushing. Styles change, now the layered approach is the principle style used and the others are there if necessary. 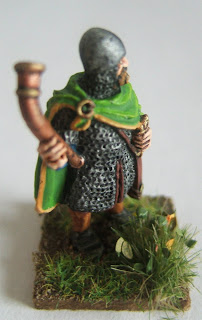 On the subject of painting styles watch out for some progressive work in progress pictures in the near future showing layering being used on a new fantasy warband.

Very much a post of two halves and what was meant to be Dark Ages has changed to Ancients.

First up a 28mm scale shield for a disorder marker in Impetus and any other game that needs a similar marker. Not much else to say about this as it is what it is; the emblem should say it all. 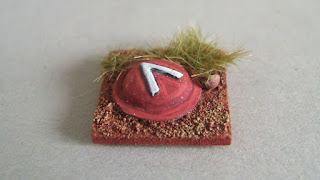 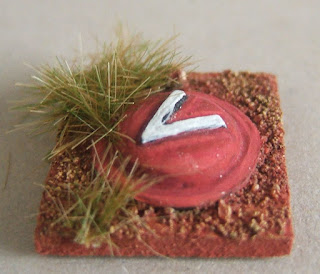 Next another four stands for ADG in 6mm, this time slingers from Rapier Miniatures. 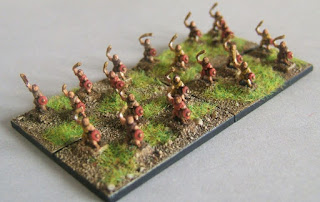 There are only 20 figures over the four stands as there were a few casualties in preparing the figures for painting and moving on to the final base. Still looks the part. 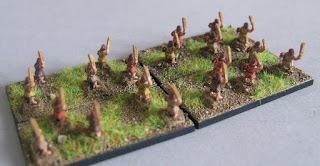 Off now to finish that Dane axe as previously promised.