So near yet so far.

This stand of peltasts stalled the other afternoon due to a rare occurrence - it was too hot to paint comfortably. Yes, it's hard to believe but it would seem that there is a summer in Scotland after all. 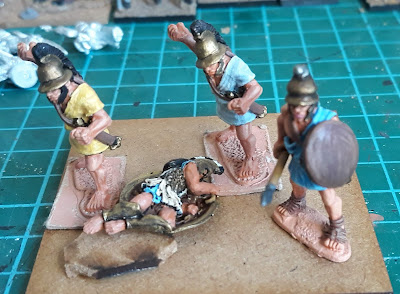 Not to be put off by some sunny weather; managed to clean, then glue to painting stands the following horses for the Arab cavalry for the 15mm ADG army that has restarted. 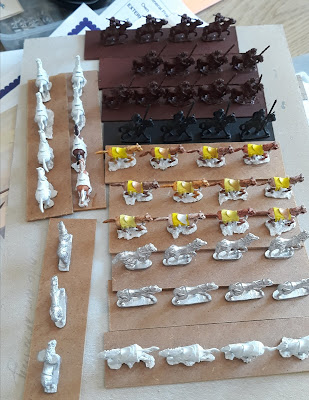 Not sure if this has been mentioned before but not a fan of painting horses, hence the varied colours of undercoat being used. The horses with yellow saddles etc were already painted prior to basing.

A few other figures were under coated at the same time but more of that later.

Once again a stalled project restarts, this time to begin rebasing from 80mm fronts to 40mm fronts.

The reasoning behind this is fewer and fewer people in the local area are playing Impetus or Basic Impetus. On the upside more people are playing ADG in 15mm which uses the basing standards of DBA.

Rebasing is a process that many painters and gamers dread; its time consuming, there is the risk of damage and there is no guarantee that you won't have to do it again in the future. 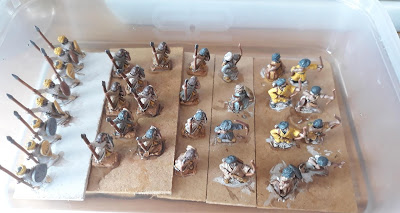 The process used involves steeping the old bases in cold water for 24 hours or more. If the figures have been glued to their base with PVA then this time will be reduced.

After the water bath carefully shuck the figures off their now soaked base - if card or MDF the base will be pliable - set aside to dry, then clean the underside of the base allowing you to rebase.

Here you have it five bases rebased on to twelve bases with 40mm fronts allowing a wider range of systems to be played if required.

Whilst on the subject of basing will be changing the frontage of bases for 28mm figures to 60mm unless the figure itself is too large.

The bases as always are from Warbases.

Peltasts are nearing completion and the slingers are just taking shape. 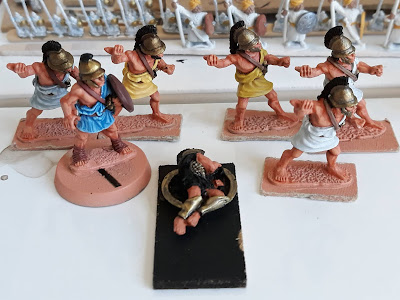 The helmets have been painted in 2 different ways. On the left base tone of Vallejo Old Gold and washed the strong tone. On the right Foundry Barrel Bronze shade then lightened with Vallejo Old Gold.

The casualty figure is from Warlord Games, previously Immortal Games and will end up on the base for these Peltasts. 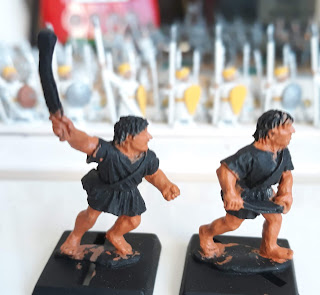 Both the peltasts and slingers are from Foundry with the slingers being from the earlier range and the peltasts from the newer range. Very different styles of sculpting and the newer figures are larger. Under the rule three foot no one will really be able to tell.

A few more work in progress pictures this time from a couple retro Citadel figures. 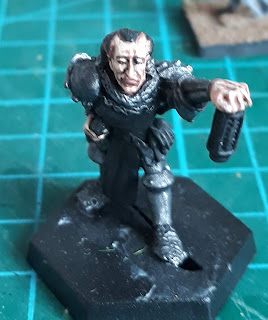 Above there is a paladin and below a ranger from the AD & D range of figures. This is the mid level character of three figures. 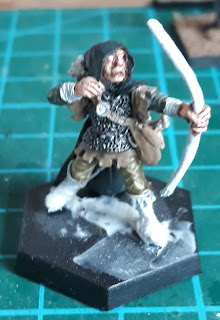 To follow shortly more progress with Peltasts and slingers for the Macedonians and Greeks. There will also be a change of direction for the basing of the 15mm Arabs started last summer.

With a Rebel Yell 10

Casualty markers for the CSA including artillery and infantry stand; the cavalry will follow shortly. 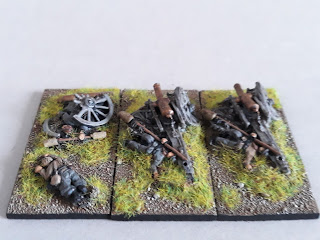 All of the figures above are from Friekorps Miniatures including the infantry stands shown below. 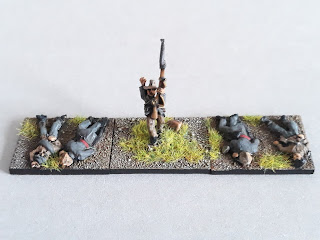 Next are three more command stands for the Confederate  States of America. The figures this time are from Blue Moon supplied by Old Glory. 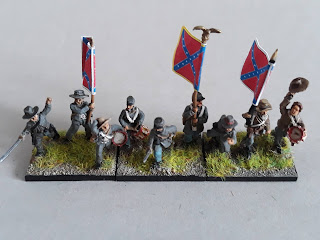 From right to left below there are standards for the 11th Missippi, South Carolina 6th Volunteers and the 24th Alabama infantry. 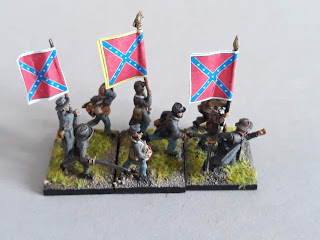 More standards and markers to follow along with work in progress pictures from the Greeks and Arabs.

June has been a slow month for hobby time here with little progress happening on several on going projects.

The command and casualty stands for Confederates in the ACW move on steadily. 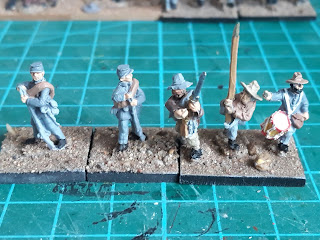 Even slower is the progress being made on the Arthurian warband and for SAGA. The companion figure for the foot Warlord needs some attention to allow that figure to completed as a small diorama base that will allow the Warlord to be removed and placed with two Companion Hearthguard figures on a separate stand. 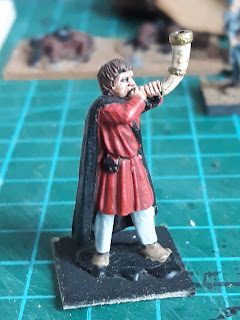 Finding blogging via a smart phone a bind, something that will hopefully not be an issue for much longer.

Next up will be some more Rebels.

Hoping this works out ok as pictures taken, edited and uploaded from phone instead of the now defunct desktop computer. 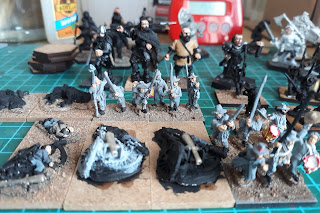 A variety of stands for ACW Confederates including command, artillery, infantry and cavalry casualities. A mixture of Blue Moon from Old Glory and Friekorps. 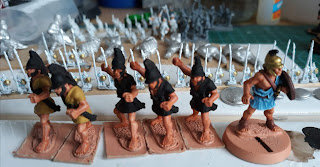 The peltasts move forwards at a snail's pace. There is a fourth now with base colour on tunic. 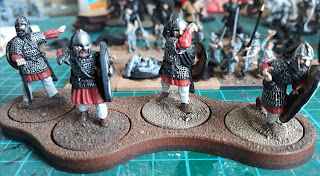 Heartguard for SAGA are getting near to a final session to complete the first part of the warband. The Warlord (on foot) has just been finished although his companion still has the bulk of the figure to paint.

The painting desk in all its chaotic glory. 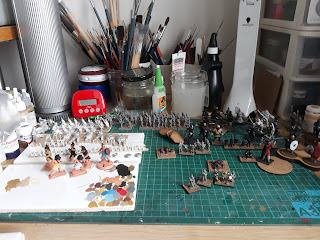 Next up will be the first completed ACW stands.

With no computer at present have not been able to up date any progress with on going projects.

Everything should be back up and running by tomorrow to resume normal posting.

Due to technical issues with a dying hard drive no work in progress pictures just now. Reinstalling from back ups however this is happening too often just now so time to consider replacing the thing. Bugger!

These figures were painted in the mid nineties and are some of the first examples of layering being used here. Both are from Foundry's War of the Roses ranges; think so anyway. 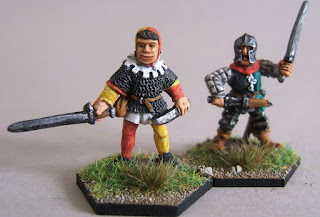 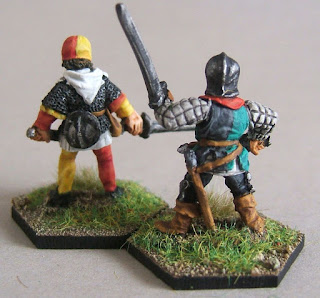 Now rebased to return to their rightful place as arrow fodder in skirmish and role playing games.

Hopefully, back to normal shortly.