The picture above is a scene from near the end of the final game for the Patrician Romans, shortly before they were routed by Yuan Chinese. The game started with the loss of a unit of horse archers on the fair end of the table, followed shortly by the camp and a unit of skirmishers in the centre. 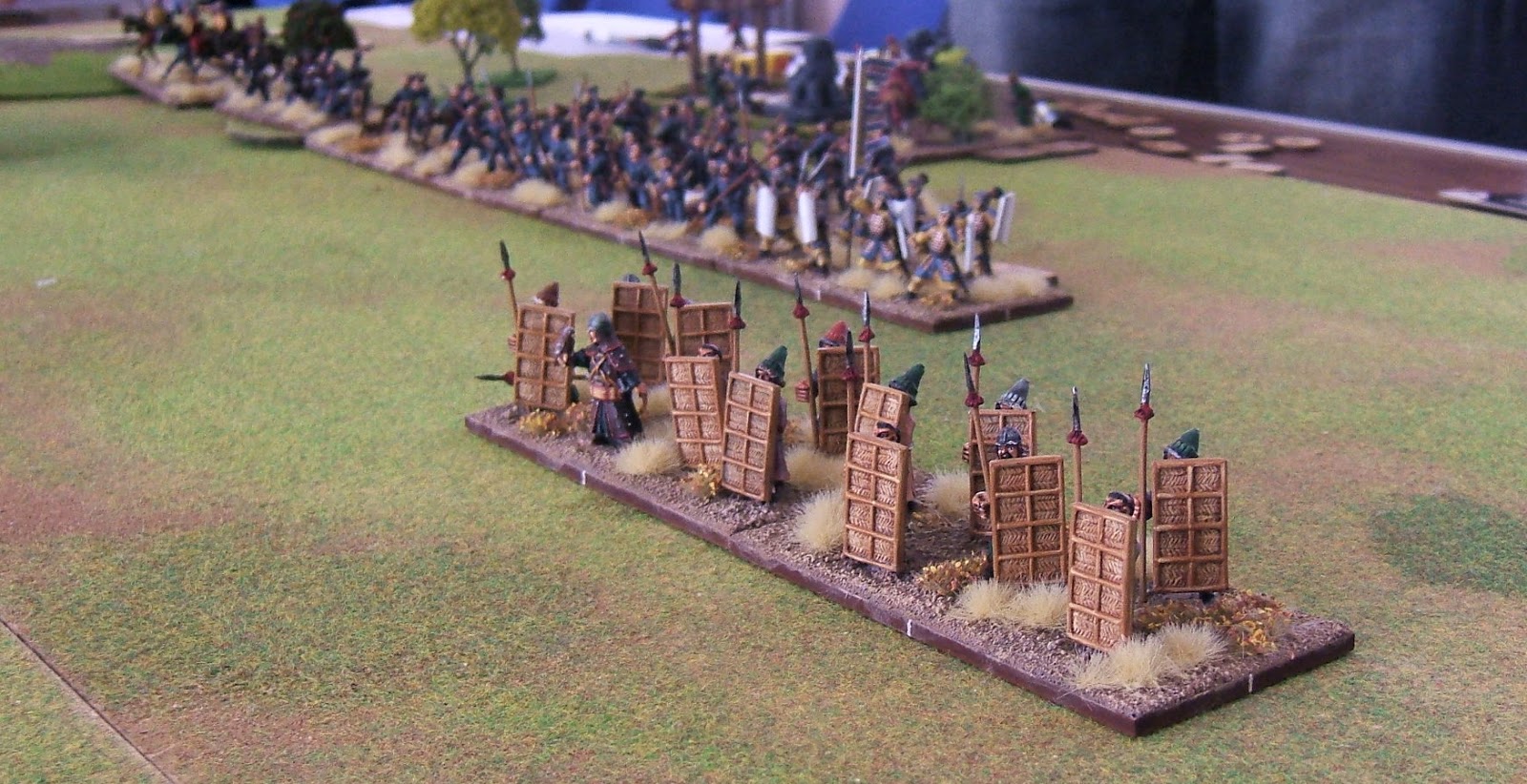 On the near end of the table, these tribal light foot would just not break under missile fire from several units of Huns, light infantry and bow armed supporting units from the Patrician Romans. 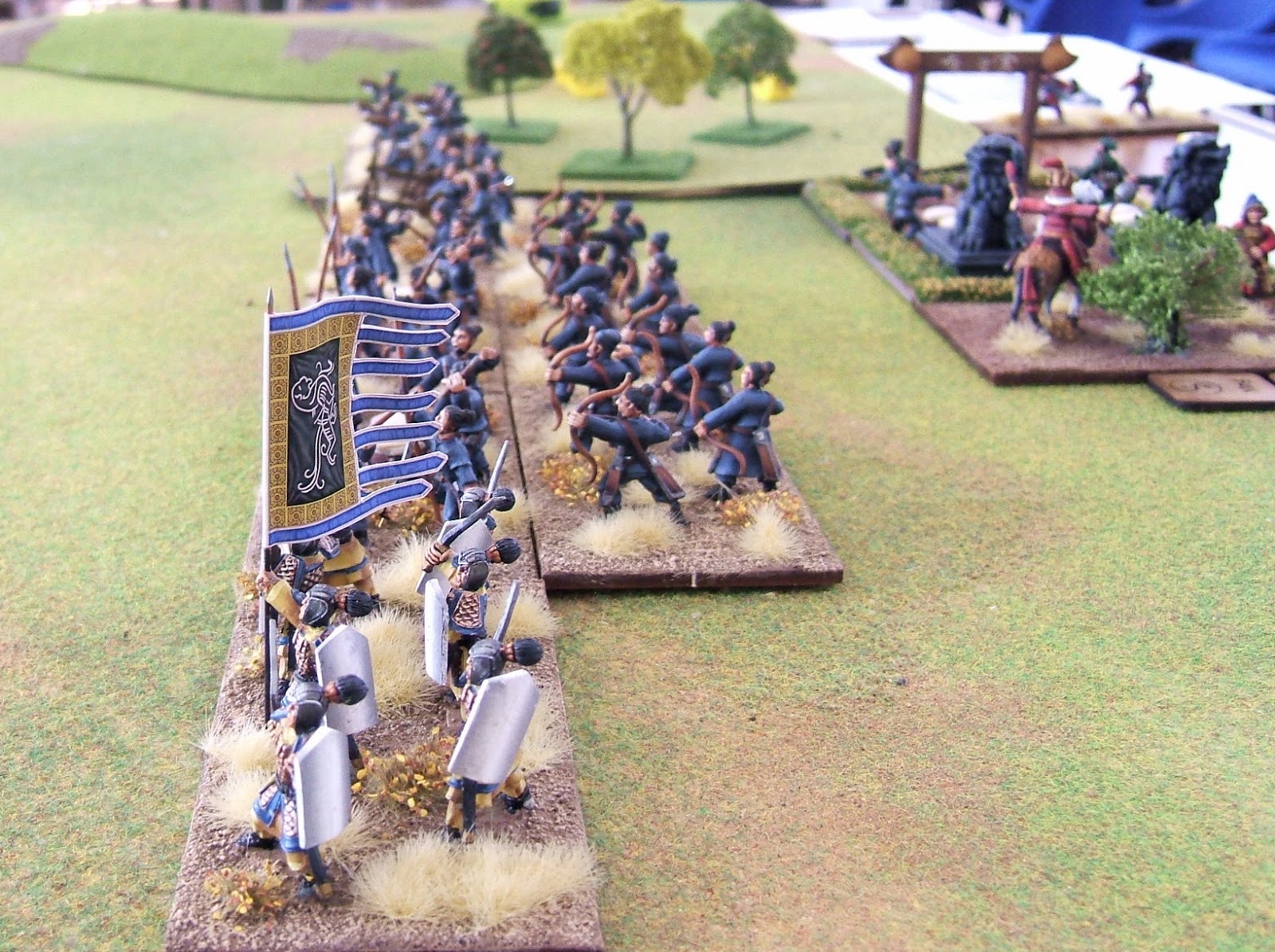 The guard swordsmen below dealt with one unit of Foederati Heavy Cavalry and stupidity on the Roman's commanders side caused the end of the Generals unit. It is never a good idea to try and ride through two zones of control with short bow A armed troops at point blank range. Made it through but only just. The resulting combat saw the end of the general and the game. 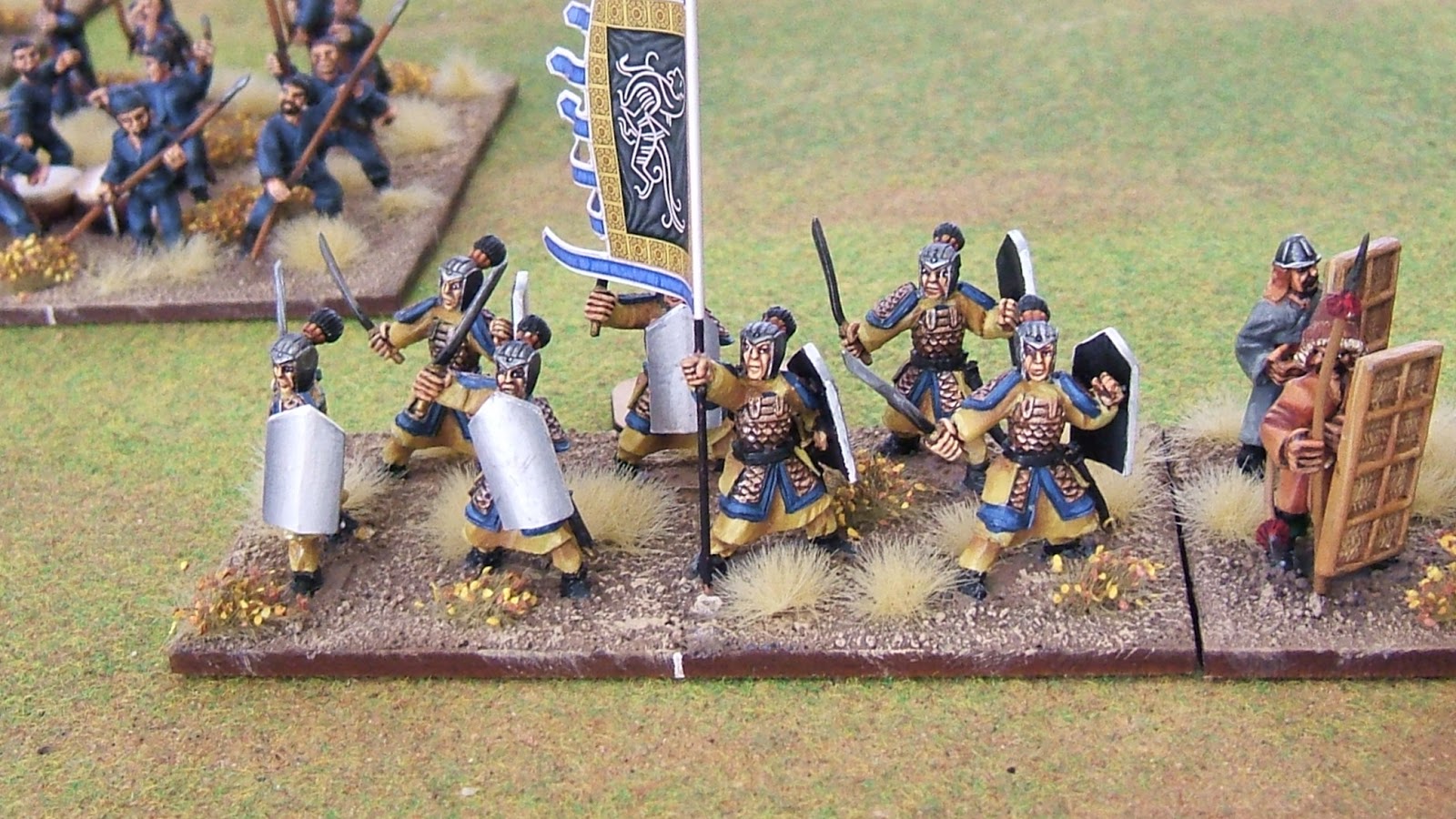 These figures from The Assault Group are really great and Frazer has had them fantastically painted too. Its the basing that really makes them though :) 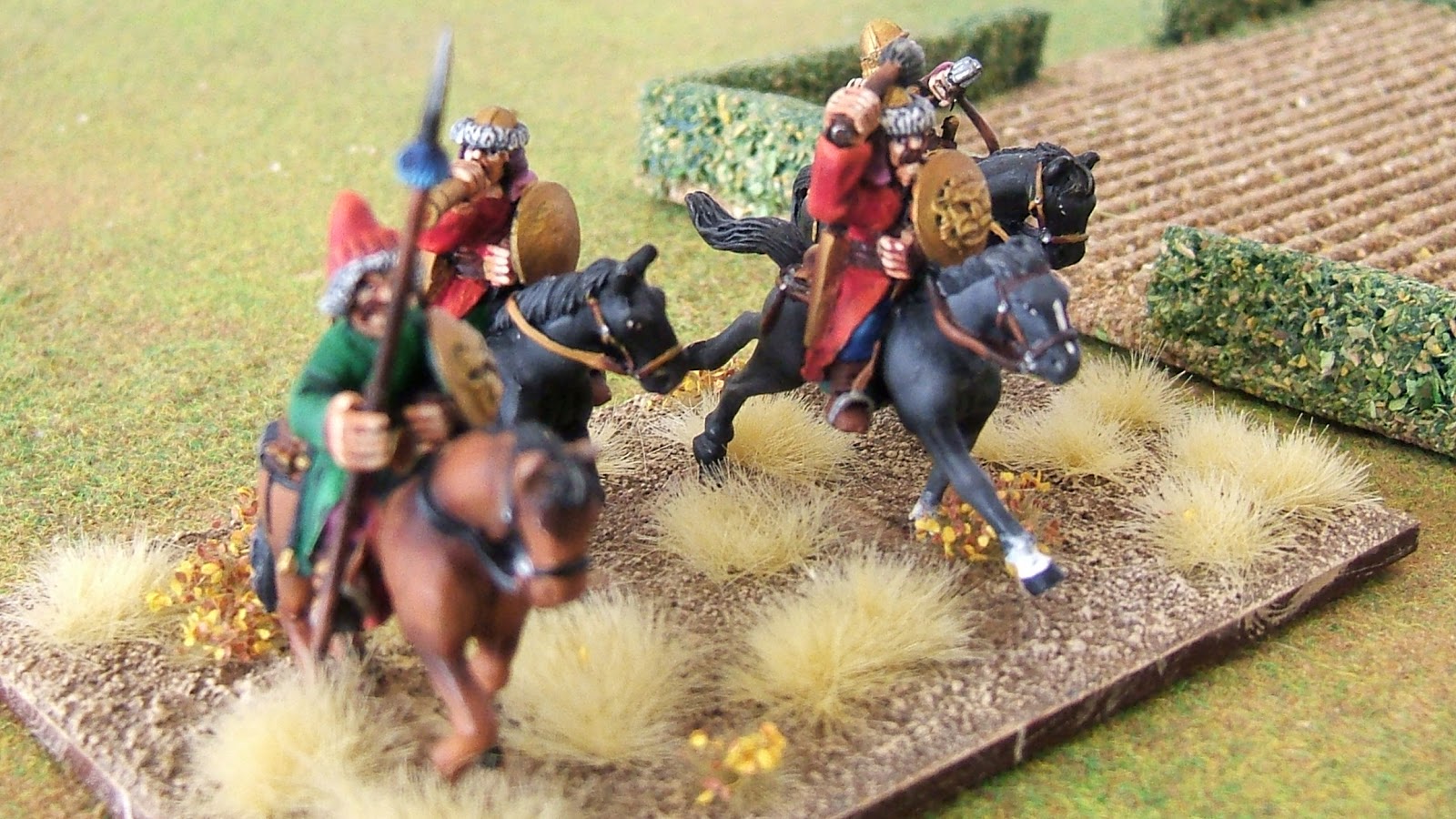 Some scenes below from the end of another Late Roman army below. This time against Berbers with a similar results, that is a rout. 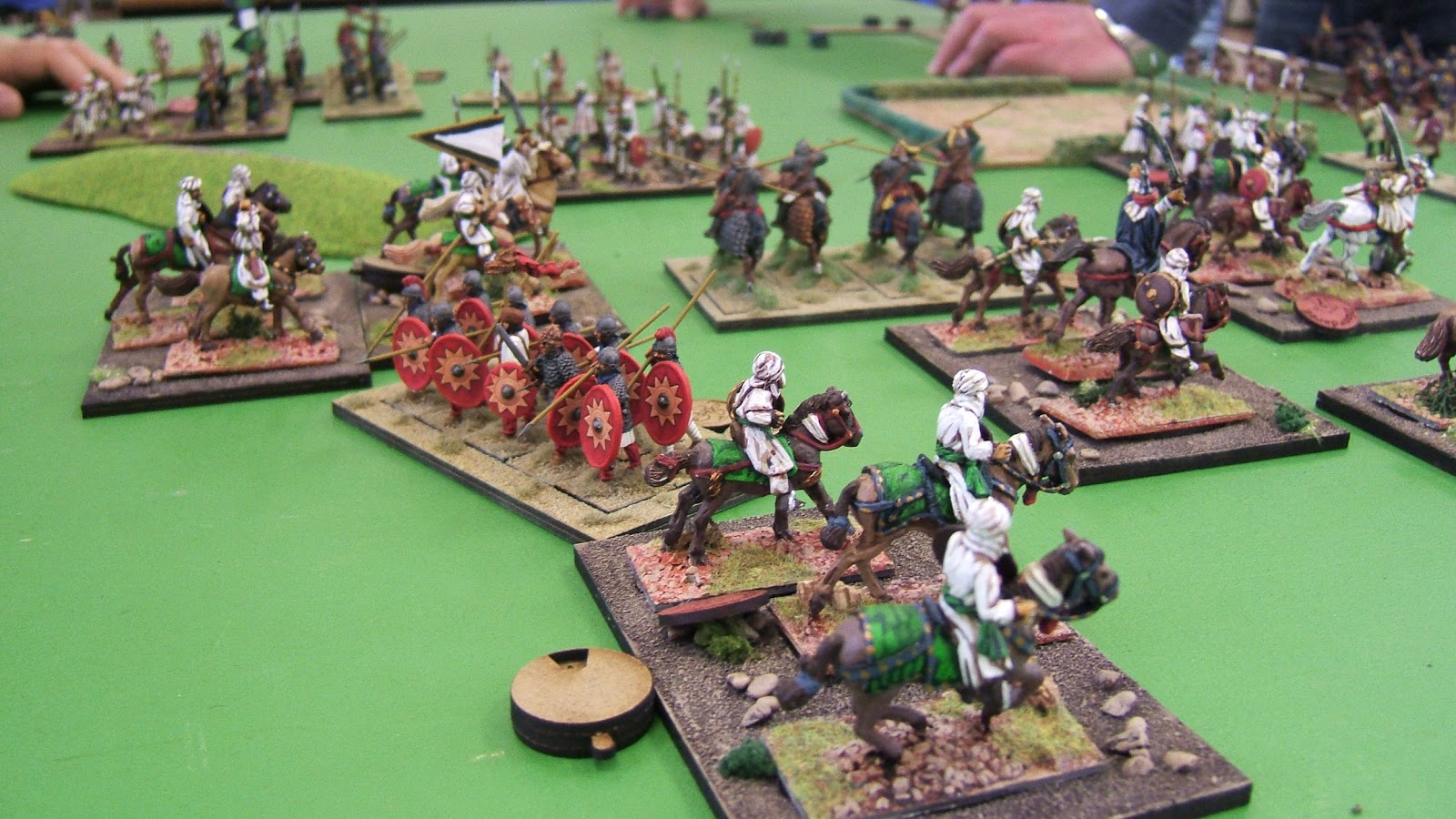 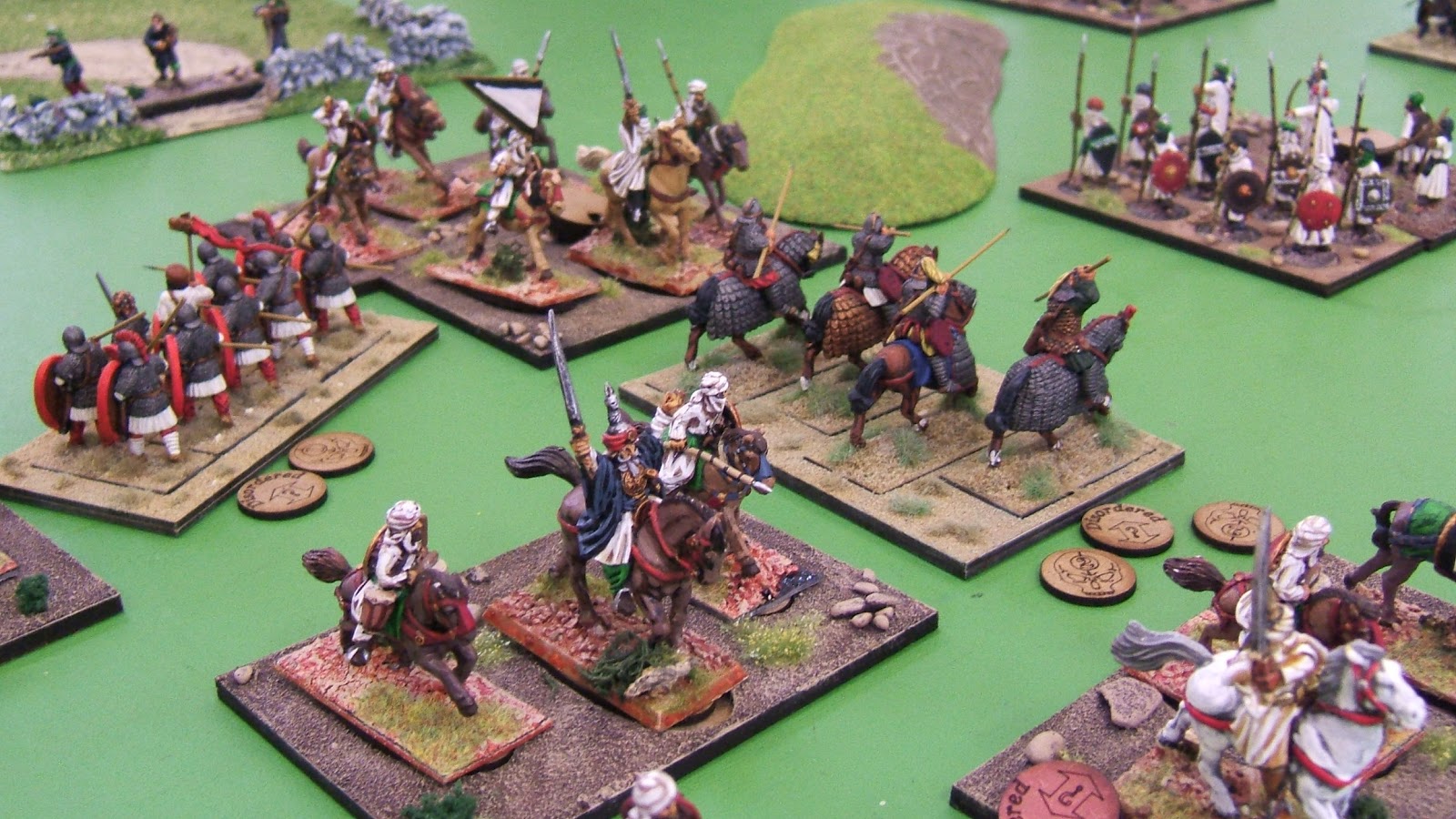 Overall a great day's gaming and with a draw, a win and a rout a good mix of games to boot. Looking forward to the next day being held by Dunfermline Wargames Club in the late summer.

Lastly, a warm welcome to:
Glad to have you aboard and if you haven't already seen this blog then its well worth a look.

At last they are complete! The first stand of Equites Primo Sagittarii are finished, based and ready for tomorrow's Impetus Competition at Falkirk Wargames Club in Grangemouth. So, here are the finished pictures. 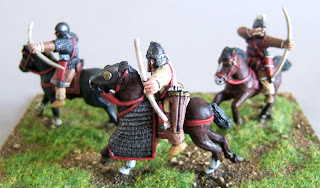 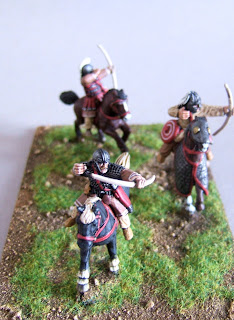 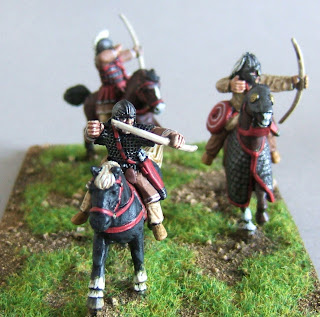 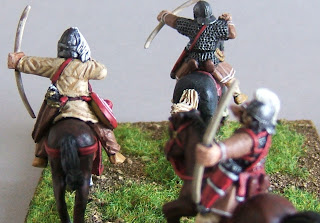 Now that these are finally finished all that remains to do for the Late Romans is somewhere in the region of 8 stands of cavalry and not far off double that for infantry. Some armies are just never completed.

Next up will be some pictures from tomorrows competition and then back to the Mycenaeans and Vikings; both of which will need dusted before being painted again.

Back to the Brushes 54

Just a quick picture to show the slow progress on the base of Equites Primo Sagittarii for Impetus. The last two riders will be completed this evening. 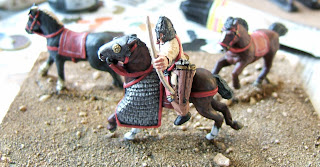 The next picture show the start of a camp for Romans. The plan here is to base the two tents separately and add in a third base with relevant figures for the Late Romans. This will potentially allow these tents to be reused for another Roman army in the future. The Tents are from Grand Manner and the undercoated figures are from Gripping Beast and Foundry.

Sort of need this finished for this Sunday, but am not sure that there will be time tomorrow. Could be burning the midnight oil again on this.

Lastly, a warm welcome to the following:
Hope that you both find something of use here.

Back to the Brushes 53

Due to the excesses of the weekend very little painting was done over the last few days. Hangovers are just no longer conducive to anything that requires any form of concentration. That said managed to dig out the partially completed stand of Equites Primo Sagittarii for Impetus and here are a few pictures of their progress: 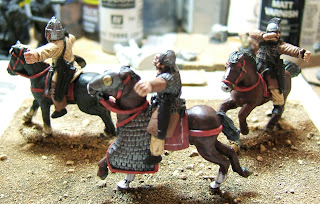 The red and white of the Equites Primo Sagittarii will be used on the equipment of the riders to add colour to these figures. The choice of colour for the clothing has been deliberate to allow the use smaller amounts of brighter colours for detail. 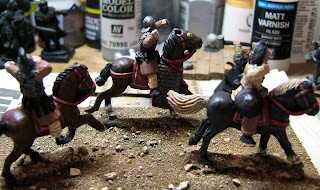 The horses are finished and over the next few days so will the riders be, in addition to the this there will be more progress made on the Mycenaean Chariot which is nearing completion and a few other smaller pieces too including the hammer wielding dwarf that can just be glimpsed behind the horse archers.

Lastly, a warm welcome to:
Hopefully, you will find something of interest in these pages.

Here are a few pictures of the last base of Mycenaean Spearmen that where completed during the 3rd Analogue Hobbies Painting Challenge. During basing several spears were knocked off and because of this some of the minor details that have been omitted during the late night session to complete these figures will remain a plain black. Don't really want to reapply the spears for a third time prior to using the figures; ah well, such is life. Anyway enough rambling here are the pictures: 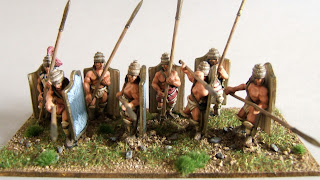 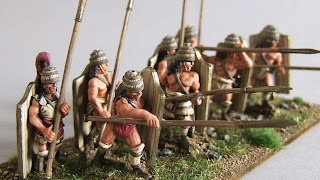 Being critical of your own work can be a good thing at times and looking at this stand with fresher eyes the choice of colour for the shields here is wrong. The grey is too cold in relation to the flesh and clothing and there should have been some variety in the colours of the shields. 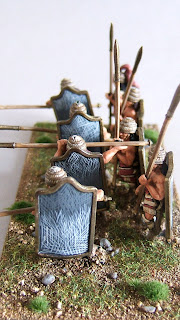 One or two shields in this colour would not have been as noticeable, however, as they are all the same colour the clash between warm and cold colours is more noticeable. You live and learn as they say. 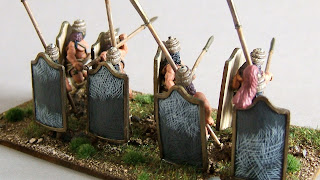 Overall though still happy with the finished unit.

Back to the Bushes 52

The Mycenaean Chariot and crew are starting to come together. The horses are now completed and in their final position on the base. Yet again the placing is on the diagonal as it was felt there was just not enough room for  a straight face on basing. You'll see what is meant in the pictures below: 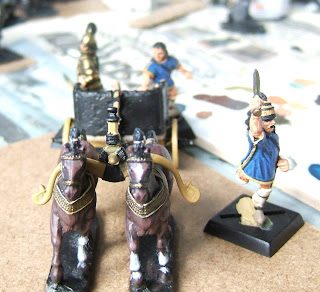 At this stage only the bass coats of colour have been applied to the wood and wicker of the chariot as there is still a fair amount of work to do overall. The exterior of the chariot box will be painted to show a textured hide effect similar to that used on the shields of other models from this army. 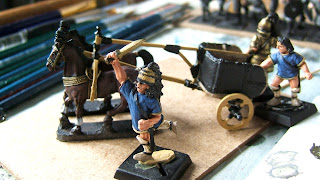 Hopefully over the weekend there will be some time to complete the crew and chariot ready for basing next week.

Back to the Brushes 51

Over the last few nights very little real painting has been done. A lot of thinking about painting and planning painting but very little actual paining. Perhaps its the thought of finishing off started bases, or committing to a larger project once the bits are done, can't say for definite, but the lids have mostly stayed on the paint pots.

A few pictures of the start of the end of a Mycenaean Chariot and crew are below: 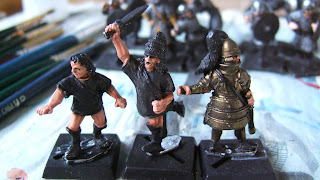 The chariot has a driver and noble for crew with the third figure as a chariot runner on the base. Hopefully, these and the horses below will be completed over the weekend time allowing. 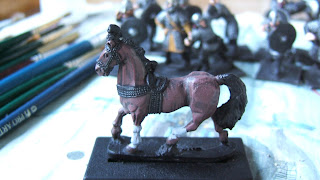 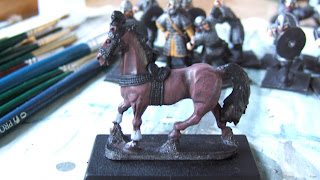 Then its on the completing the chariot itself. This chariot will have a hide effect on the panels similar to that painted on the wall shields of spearmen. 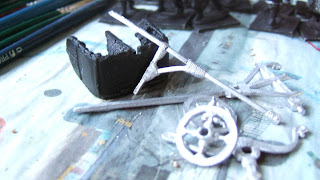 After that its on to basing the lot and then completing the next started base, probably the Vikings you can see lurking in the background in the first three pictures.

Lastly a warm welcome to:
Hope that you find something of use and interest in these ramblings.