to the following new followers:

Thanks for joining and hopefully you'll find something of interest and use in these pages.
Cheers for now.
Posted by roma912 at 07:57 No comments:

Email ThisBlogThis!Share to TwitterShare to FacebookShare to Pinterest
Labels: WIP

Back to the Brushes 3

Apologies for the delay since the last post but things have been a little busy here over the last two weeks. The month started well and then rapidly ground to a halt due a variety of reasons including motivation, graduating, work and a few other pressing matters.

The Spartan Allies will require a brief dusting before work can continue and this will not happen until early in August. As will the Macedonian Cavalry that gather dust beside the Allied Phalanx. Oh, and a few packs of phalangites and an armoured Seleucid Elephant arrived the other day from Aventine. They do not disappoint and will fit in well with the existing figures from Gripping Beast and Foundry. Yet more plans within plans to follow.

That said over the last few days 2 platoons of 20mm Late War German Panzer Grenadiers have been finished as a the result of a conversation regarding Disposable Heroes at a recent club gathering. Painters and wargamers tend to be butterflies when it comes to interests and completing projects - well this one is at any rate. This will also allow the opportunity to try out the "Road to Hell" from D& P in the near future. More details and pictures to follow shortly.

Thanks for your patience.

The first Allied Phalanx for the Spartans is actual meant to represent the Brasidians or Nedamodes. These are mentioned in Thucydides account of Mantinea as holding the left flank alongside the Sciritae. The figure below has been painted to show a lesser Spartiate who will be placed as the Brasidian's officer. 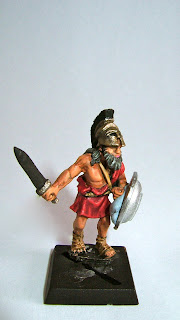 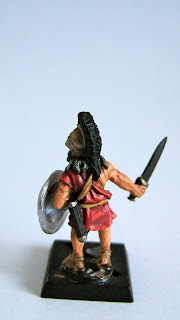 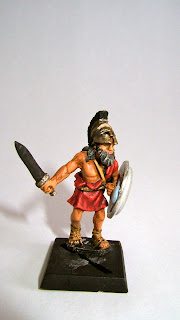 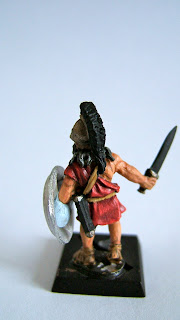 The figure is from Gorgon Studios and is shown with a foundry Hoplon at the top and a Gorgon Hoplon at the bottom. At present no decision has been made as to which shield will be used, although at present the large of the two is preferred. Sorry about the shadows, the ambient light not the best today.
Hopefully more pictures of the rest of the phalanx to follow shortly.
Cheers for now
Posted by roma912 at 13:23 1 comment:

many miniature manufacturers have different views on what is 28mm, as for that matter do many gamers. Older ranges tend to towards 25mm and some newer ranges are moving towards 32mm. We all have our preferred ranges and manufactures for a variety of reasons. The ranges below are all compatible in size at 28mm and come from several well known manufacturers. 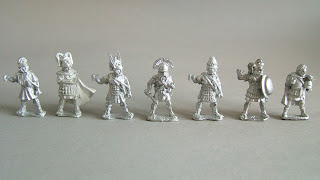 From left to right you have here: Aventine; Gorgon Studios; Aventine; Foundry; Aventine; Foundry and Gripping Beast.
The Aventine figures are some samples that Kevin from Aventine Miniatures sent through the other day. Great service from Aventine here, with the samples arriving next day and the response time to an emailed enquiry being rapid. That along with the quality of the figures adds to the overall perception that Aventine have their attention fixed on customer service. The comparison figures are from the lead mountain and are all sculpted by Steve Saleh.  The Aventine figures compare well against the other figures and fit in well in terms of size. That said they are excellent figures in their own right, being well sculpted with clear details and clean casts and a few of them will be joining the ranks of Late Macedonians and Successors very shortly as regular pikemen and mercenaries.
Aventine Miniatures are definitely worth taking a look at if you haven't already done so and to be fair that elephant on their front page is bloody marvellous to say the least.
Here are a few more comparison pictures between the ranges above:
Hopefully you have found these pictures of use and are better able to resist temptation than some others. Work on the Allied Phalanx progresses well - if slowly and there will be some work in progress pictures presently.
Cheers for now

To the new followers:

and any other new followers who haven't been welcomed to this blog.

Email ThisBlogThis!Share to TwitterShare to FacebookShare to Pinterest
Labels: WIP

As the last units of Spartans are slowly taking shape the creative spark is drawn to other sources. The impetus driving the Spartans was the Battle of Mantinea with the 400 point army depicted and painted representing the victorious force of that bloody day. The inspiration that will drive the Macedonians on will be taken from Arrian as below:

But to this Alexander replied, "I recognize the force of these arguments, O Parmenio; but I should feel it a disgrace, if, after crossing the Hellespont so easily, this paltry stream (for with such an appellation he made light of the Granicus) should bar our passage for a moment. I consider that this would be in accordance neither with the fame of the Macedonians nor with my own eagerness for encountering danger. Moreover, I think that the Persians will regain courage, in the belief that they are a match in war for Macedonians, since up to the present time they have suffered no defeat from me to warrant the fear they entertain."
Having spoken thus, he sent Parmenio to take the command upon the left wing, while he led in person on the right. And at the head of the right wing he placed the following officers: Philotas, son of Parmenio, with the cavalry Companions, the archers, and the Agrianian javelin-men; and Amyntas, son of Arrhabaeus, with the cavalry carrying the long pike, the Paeonians, and the squadron of Socrates, was posted near Philotas. Close to these were posted the Companions who were shield-bearing infantry under the command of Nicanor, son of Parmenio. Next to these the brigade of Perdiccas, son of Orontes; then that of Coenus, son of Polemocrates; then that of Craterus, son of Alexander; then that of Amyntas, son of Andromenes; finally, the men commanded by Philip, son of Amyntas. On the left wing first were arranged the Thessalian cavalry, commanded by Calas, son of Harpalus; next to these, the cavalry of the Grecian allies, commanded by Philip, son of Menelaus; next to these the Thracians, commanded by Agatho. Close to these were the infantry, the brigades of Craterus, Meleager, and Philip, reaching as far as the centre of the entire line.
The actual army list has still to be finalised but the above passage will provide the historical basis of the army as well as the inspiration to paint it. At first glance this force will have at least six phalanx in it, so there will be a good few pikemen to paint as well as several units of cavalry. This doesn't include the skirmishers and light infantry mentioned as well. Oh the joys! When the full list is completed it will be posted to the Macedonian page.
Cheers for now.
Posted by roma912 at 22:15 4 comments:

The following pictures show how the Peltasts and the previous units of Spartan cavalry have been based. This is actually a step backwards in that an additional process has been added back in to the sequence for basing; this is the creation of raised and textured ground effects by using milliput. This has returned for two main reasons:


The stages that are currently being used are as follows:

The following pictures show this in stages 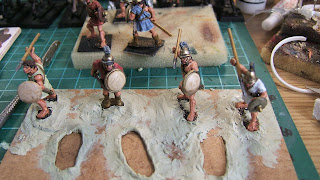 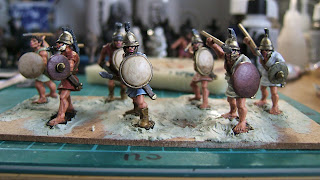 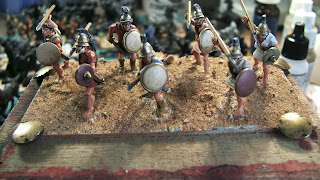 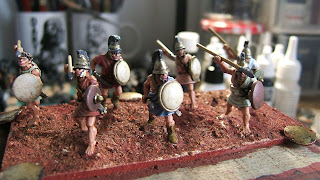 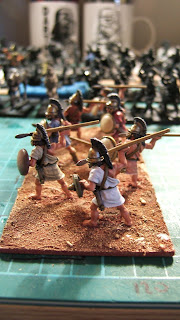 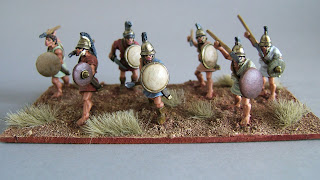 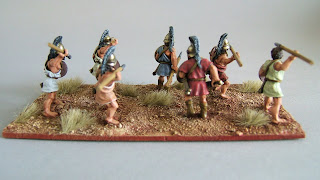 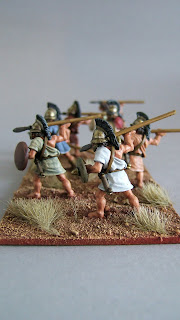 At present this base has no static grass on it, which is not in keeping with the rest of the army, so it will probably be added in at some point.

The first unit of Allied Hoplites progresses slowly as does a unit of cavalry for the Rise of Macedonia army that is being worked on in tandem to the last of the Spartans. Will hopefully get some work in progress pictures in the near future.

Hope that you enjoy the pictures and find the ramblings on basing of some use, although there is nothing new about the method used.