The Moors move slowly forward with some progress on the Warlord and Hearth Guard. 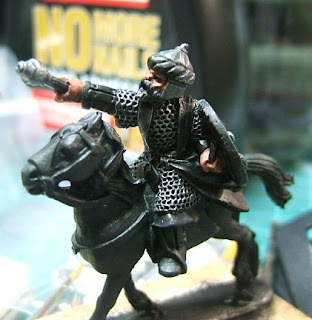 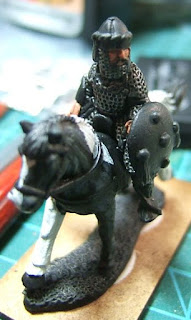 Both figures are from Gripping Beast and will be painted with a limited pallette for the riders of black and yellow. Hopefully this will be effective when completed. Both figures have progressed some more since the pictures were taken. The figures are from two very different periods of Gripping Beast's history and show the changes over the years in figure sculpting. Cheers for now
Posted by roma912 at 21:05 4 comments:

With a Rebel Yell 8

At long last this camp base of Basic Impetus Baroque has finally been flocked and pictured. 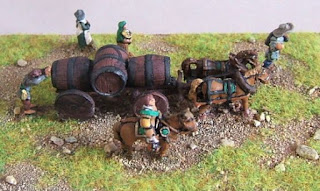 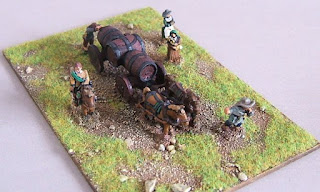 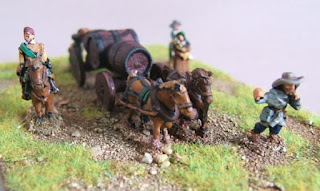 The figures are believed to be Minifigs and were part of a large collection that has been rebased, toned with Devlan Mud wash or equivalent and matt varnished. All that remains now is to sort out the surplus wagons and effects for sale and, oh, yeah paint the hundred plus foot and cavalry to complete the armies. Maybe next year? Cheers for now.
Posted by roma912 at 20:26 4 comments:

Some work in progress on the 15mm Arab spearmen shown below front and rear. The first set are before the base wash for tone and the second set are after the wash has been applied and dried.

The figures are from Essex and there will be a second stand to follow. The other stand will be much darker in colour than this stand as they will be for the expanded army that will allow the Moors to be gamed.

Overall the wash has achieved look that was required and given some degree of shading without being overpowering. There will be some more work in progress pictures shortly from the same period however in a larger scale. Cheers for now.
Posted by roma912 at 17:39 3 comments:

Recently, on the gaming front an introductory game of SAGA: Crescent and the Cross was played. 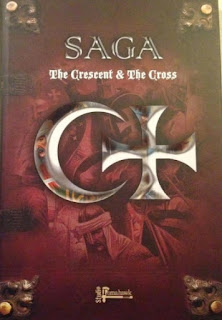 First thoughts are the Moors won't stand up against the Crusaders and Military Orders heavy cavalry. Perhaps this is won't be the case, perhaps it will and as the figures are "generic" they may morph into other factions in time.

There was a few raised eyes when Impaling Spears and The Moors Gold were used. Impaling Spears certainly stalled the Knights charge and took a few of them down too. However, the Crusaders and Military Orders had the edge on the night and the game was a victory for the Crusaders. There was a comment that the rules are written to favour the Christian factions, hopefully further games will show that there is balance within them and this is not the case.

During a conversation with a friend the other day the expression "there are gamers who paint and painters who game" was used. This got the grey matter turning round and the question is which are you? Here it is a painter who games.

Email ThisBlogThis!Share to TwitterShare to FacebookShare to Pinterest
Labels: Crescent and the Cross, Gripping Beast, Misc, Moors and Arabs, SAGA

Working on Arabs and Moors in different scales and for different games at present.

First up are 15mm figures from Essex Miniatures for Basic Impetus. The plan with these figures is to allow the wash to do nearly all of the work, so white robes are the way forward here. 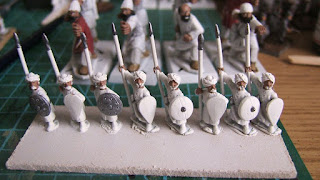 There are another eight to be painted for this stand and these have just been undercoated.

Below shows the start of a Moorish Warband for SAGA: Cross and Crescent with the Warlord and his Hearth guard in the top picture and two warriors and a banner man below. All figures are from Gripping Beast. 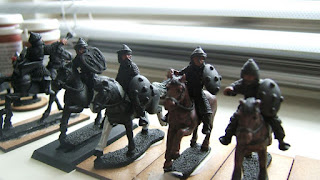 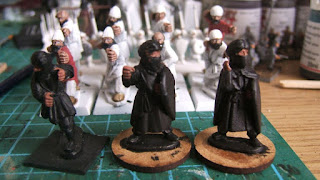 The Dance of Bronze 15

The first of many phalanxes in 6mm for, well for anything that is possible although primarily for ADG. 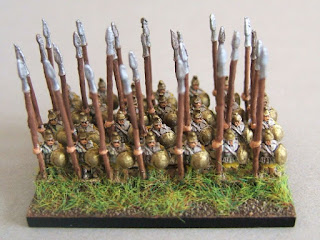 The white undercoat has been used to the painters advantage here as after washing there was little additional painting to do. Future stands will have both white and silver shields to represent some historical units. 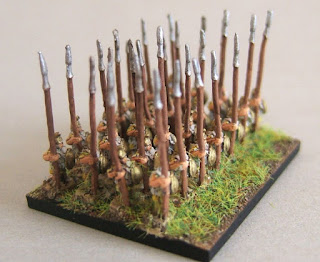 There are twenty-eight figures on this stand and although thirty-two was the ideal number it was just possible. In fact in trying to get figures along the base line several joined the great lead mountain in the sky. 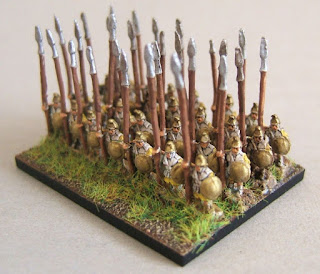 This stand represents one taxis comprising of four syntagma of 256 men or 1056 in total. This would be slightly under strength for a taxis as they were often 1500 men strong. Have never been sure if this number included super numeraries as well. The basic army will have a minimum of four of these. 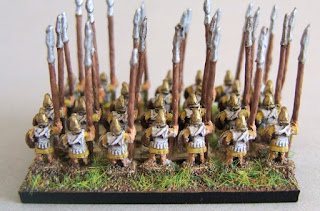 Another session on the Sassanid archers for Basic Impetus shown below. Trousers and shoes so not a huge amount of progress. 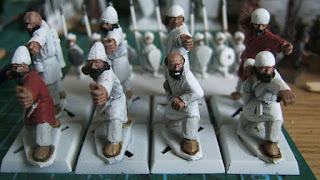 At this point toying with the idea of introducing a new format to basing; instead of dedicated 120 x 60 mm bases looking at using 60 x 60 mm bases to offer more opportunity to use the figures with other systems than Impetus.

On the subject of basing; some progress on sabot bases for Vikings in Basic Impetus shown below. The matches are glued down with wood glue and then the raised edge will be contoured with modelling clay or similar before the usual texturing for basing 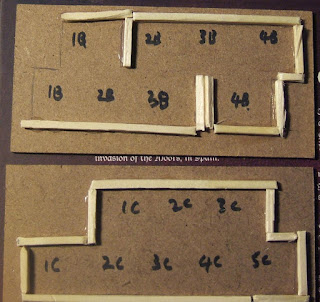 Its only an idea at present however, this would allow dabbling with Hail Caesar and Swordpoint, suppose the final decision will be made at the time of basing.