The items for sale page has been recently updated with a variety of 28mm ancients, dark age, WW2 and Sci-Fi figures for sale.

Some working in progress pictures for this year's Analogue Painting Challenge

First up are the horses from the stand of prodromoi that are currently being painted for a Basic Impetus Army. The figures are from A & A Miniatures and have been good so far. A & A are not really a producer that I have dealt with a lot however, their sister company Aventine grow from strength to strength in these days of constant new releases in plastic. 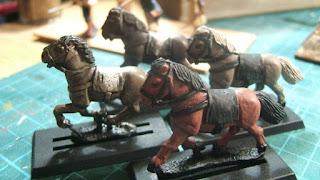 Next the now two archers for a stand of skirmishers for the same Macedonian army. The third figure in full hoplite panoply just didn't sit right with these figures from Foundry's original Greeks. Slightly smaller that the World of Greeks range although still good in their own right. 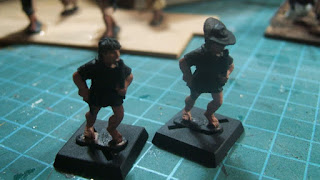 Lastly, five stands of Augmented troops from Critical Mass's ARC range in 15mm. These have sat undercoated in tank grey since last year's challenge and have finally been dusted down and started as a part of this challenge. Another four stands are lurking just out picture to the left. 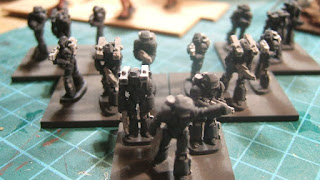 In the background of all of these pictures are some stands of Moors for the Impetus army that is in progress. Not a part of the challenge although they may grace these pages during the next few weeks.

Simply put would be to achieve more painted figures than 2015 and game more. The reality is with a 9 month old son, will be lucky to achieve targets already set for the year. These include:

Recon on current form that completion of the first two targets would be good any more excellent.

So now to gaming and from the above list it should be fairly easy to see that both forms of Impetus and Critical Mass are on the list as are the following:

A good list to try and achieve a game per month for the rest of the year. Fingers crossed there is time to achieve this.

Now, as all is quiet at present, going to sneak a half hour at the painting table as time is marching on in the 6th Analogue Painting Challenge.