Back to the Brushes 44

Made a good start on the next point's worth for the Viking SAGA warband. The figures are as usual from Gripping Beast's range of Vikings and will be individually based for SAGA and sabot based for Impetus. The central figure is from Gripping Beasts Rus range for that bit of variety and character. 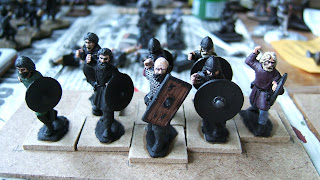 The figures below are so very near to completion that they could just as easily have only been undercoated. The top picture is of a points worth of Hirdmen for SAGA and below them the first of the Ninja for Songs of Blades and Heroes. 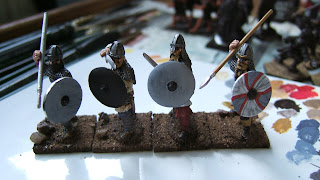 Its worth noting that the Hirdmen and Ninja shown here had been started prior to the painting competition at Analogue Hobbies starting, so will not be included in any entries for Curt's competition. 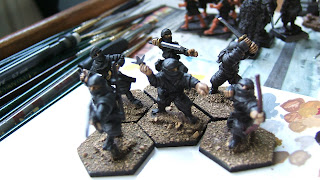 Both of these groups of figures will be finished in the next couple of nights allowing some major effort to be spent on entries for the competition.

Fury of the Norse 4

Here are the last two casualty markers from Old Glory: 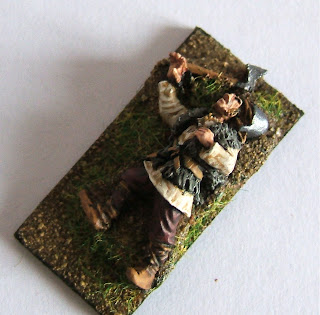 These will be used in Impetus and SAGA as fatigue markers as necessary and have been enjoyable to paint in between larger projects and bases. They were also a part of the first entry into the Analogue Hobbies painting competition. 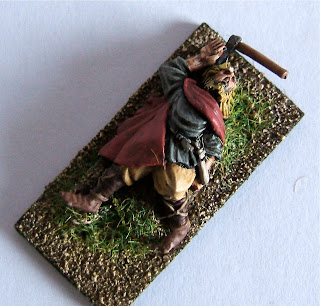 And Now for Something Completely Different 8

As a part of the Analogue Hobbies painting competition, each painter has to paint a figure for the organiser. This year Curt has selected Ronin, so here is the entry from here: 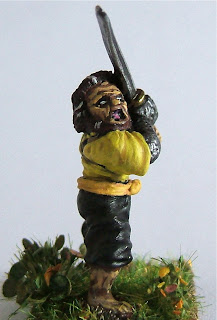 The figure is a 25mm Samurai from Dixon Miniatures, that came along with the Ninja that are currenly being painted for Songs of Blades and Heroes. In comparison to many other 25mm figures it is small, but what it lacks in stature it makes up for in character and movement. That katana does look like it is about to start being used. 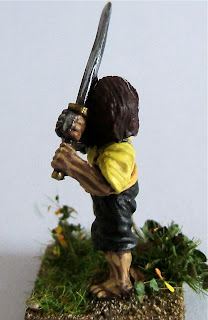 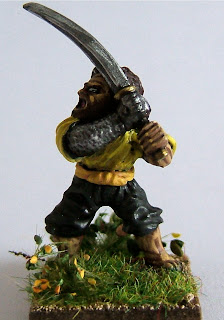 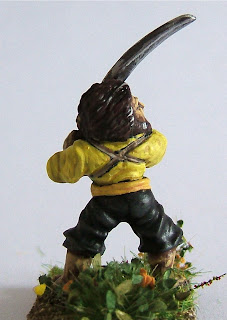 The foliage on the base was picked to compliment the colours of the tunic and belt.

The second and final stand of Skiritai for the Impetus Spartans lies below. The figures are Gorgon Studios Spartan Ekdromoi and fit in excellently with the Foundry World of Greeks Spartans. Well they should really as they are from the same sculptor - Steve Saleh. 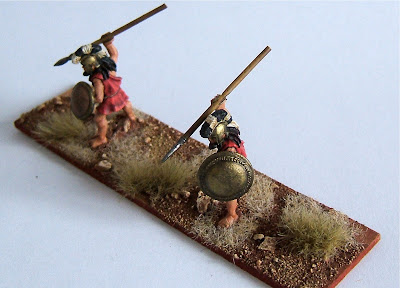 These figures along with a few others are a part of the first entry from Brushes and Bases to Analogue Hobbies painting competition. 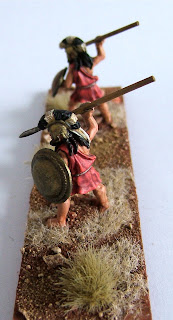 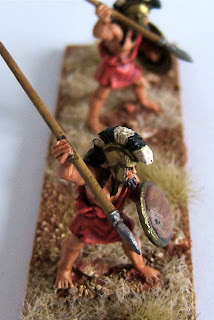 As the figures are being used as Skiritai a hoplon has been added to one figure to show the difference on the table; this is because Impetus depicts the Skiritai as skirmishers. Both stands when joined together can also be used as a mercenary peltast stand.

More pictures of recently completed figures to follow shortly along with more work in progress shots.

After waiting to be based for what seems like a very long time the unit of Mycenaean Swordsmen is now fully completed. Sadly, these figures can not be added to the competition at Analogue Hobbies but there will be more in future entries. 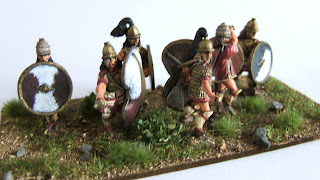 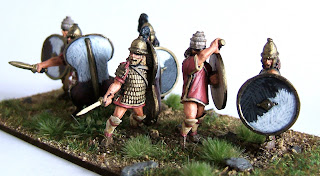 The miniatures are from Redoubt Miniatures range of Mycenaean figures are and great to paint; a great many of the figures have a lot of character for rank and file types. Yet again the shields are all fully hand painted and are the focal point of the unit. 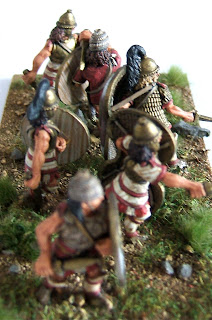 Next from this army will include a unit of spearmen and a chariot or two, looking forward to both. 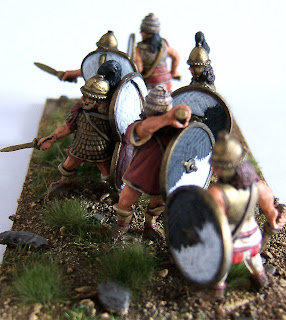 Other work in progress just now includes more Vikings for SAGA, some from before the start of the competition and a points worth of warriors that have only just been started. German crewmen from SHQ and respective artillery and anti-tank guns and just a few Ninja. Pictures of all to follow shortly.

The first entries to the Analogue Hobbies painting competition have been posted and will be following shortly too.

Back to the Brushes 43

Christmas and New Year have both come and gone; normality and routine return to everyday life and the painting table is revisited for the first time in a while. In a flurry of brushes the Mycenaean swordsmen are completed and are now just waiting basing, final picture to follow shortly.

The painting table has many items on it including a Hirdman  unit for SAGA and the original six Ninja for Songs of Blades and Heroes. These items will be finished over the next few weeks as last night saw a start to entries for the Analogue Hobbies 3rd Annual Painting Competition. The pictures below show some of the progress made and the variety of items being painted 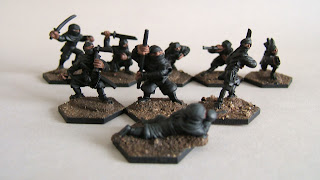 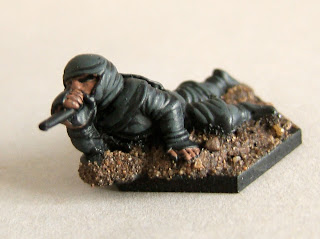 More Ninja from Dixon Miniatures for Songs of Blades and Heroes. 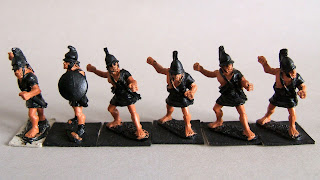 Peltasts from Foundry for Impetus as Mercenary Peltasts for the Spartans and other planned armies. 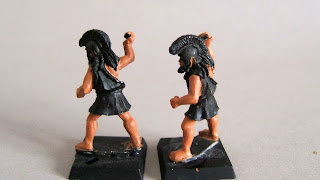 Exdromoi from Gorgon Studio to be used as Skiritai in the Spartan Impetus army. 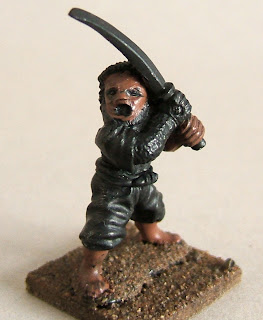 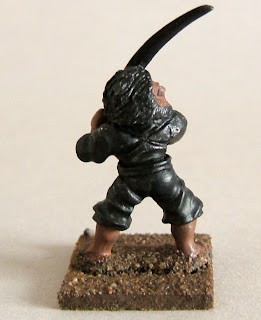 One of the 47 Ronin for Curt who is organising the competition. The figure is from Dixon Miniatures and will be next to be completed so there is something to add to the competition alongside the casualty markers completed during the holiday period. 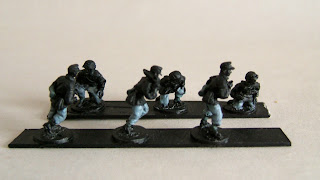 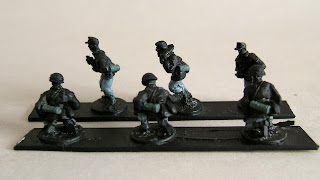 Lastly, there are some SHQ SS Artillery figures to help complete the several pieces of artillery and anti-tank weaponary for the SS in Disposable Heroes. The guns have been started sometime ago.

Not much really, is there? These aside the main thrust of the painting for the competition will centre around Ancient Greece, being mainly for Impetus in bases of either Mycenaeans or Spartans. Oh and lets not forget some Vikings so SAGA can grace the table in 2013. Looking forward to it all...

Lastly, a warm welcome to:


Hope that you find something of interest here.