This year managed to paint the following

Time and motivation have been issues throughout the year and I have noticed a preference for painting individual figures rather than working on units for armies. This is a reflection on the pressures against time and motivation as it better to have one figure waiting to be completed than a dozen.

The rebasing project in the early summer was completed quickly and without any major issues. All that remains now is to paint the remaining figures to complete the army for Battle Cry.

This year managed to game with the following:

Dragon Rampant - played three games towards the end of the year.

Again time has been an issue with gaming as it is not just a case of picking the phone and arranging a game. Sadly, real life takes over from time to time and as a result gaming loses out.

Hopefully, 2017 will be better in terms of gaming and painting and the AHPC VII will be a good starter for ten on that.

A few updates on progress for the AHPC VII 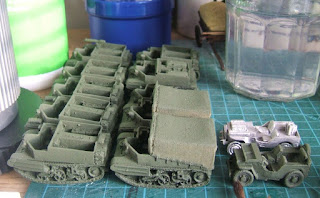 As the two German Armoured cars are now waiting on varnishing it's time to start on the Bren carriers for the British. There are eight Carriers, a Wasp and a Lloyd carrier here plus two jeeps. Being painted however not part of the challenge are a Sexton 25lb and a Sherman ARV; both of these have been loitering around the painting table for years now and it is time they were finished. 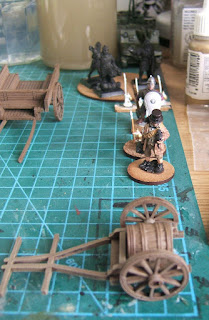 Some progress on the wagons and the prep is finished for the Curtgeld figures at the end of the row. Three figures and Two Painters will plot the progress on these as working in a team with RussG on this part of the challenge. 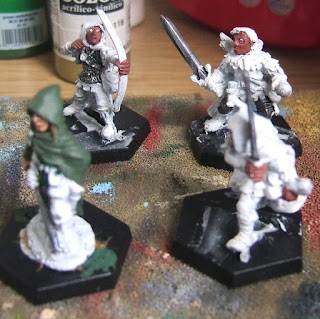 Lastly are the newly added rangers to the challenge with flesh underpainting complete and armour blocked in . Still struggling with poleyn being on the top right figure, however he is from the AD&D range that Citadel produced in the mid-eighties. There are another four ranger types that may get added to the mix depending on how well the AFV's go. Hope that everyone has a great holiday over the next week.

Some more progress made the other evening - well late night - on current work for the Challenge. 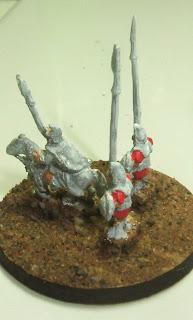 First up is a command stand in 6mm for ADG using Rapier Miniatures. Not much else to say here save that these are Macedonians. 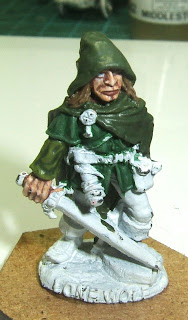 Next is a tribute and the starting point of a change in direction already in the challenge; the Lone Wolf figure as released by Citadel in the early '80's. After Joe Dever's recent death thought it fitting to paint this figure as a tribute, with more ranger types to follow. 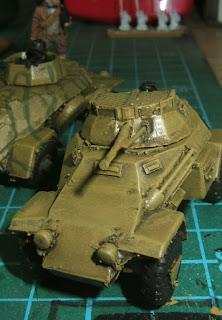 The next two pictures show the progress on the Late War German armoured cars with the camo being outlined on one and still waiting to go on the second. Next for these is the dry brushing in layers to achieve the highlights across the plate work of the vehicle.

In the background is a certain risk taker that will be finished very soon. Last up is one of the two Warbases wagons with the first coat of wash starting to dry. This will probably receive another coat once its dried.

Again the background shows the Curtgeld figures being undercoated in black, one still to do. 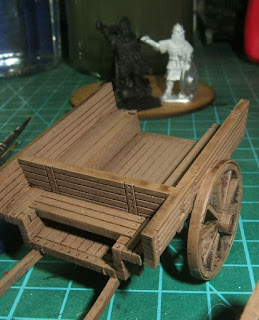 The first session of painting for this year's Challenge went well last night. First up are two wagons from Warbases that received their base coat of Khemri Brown From Citadel's foundation paint. 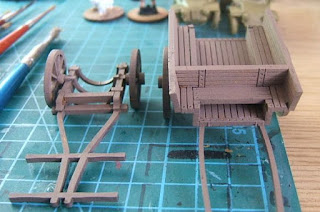 These will be washed with Agrax earth and then progressively layered and dry brushed to give that aged and greyed effect that is seen on wood. Both are 28mm in scale and will be used in Dead Man's Hand or similar style skirmish games.

Next up are a SdKfz 223 and 221 both from Frontline in 20mm. These have had their base coat touched up with Vallejo Mid Stone, then washed with Nuln Oil and then dry brushed in the Mid Stone again. 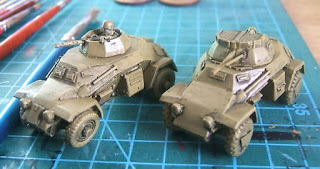 Both still have more dry brushing to come as well as picking out the details and crew. Will probably opt for a painted camo on these at this stage as this looks rather interesting: 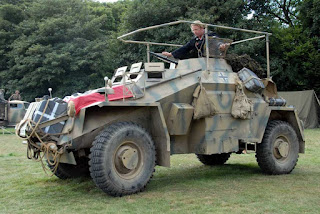 Unfortunately, with this resin kit there is no curtain rail provided so will have to live without it unless something comes together with some wire.

Hope to get back to both as soon as possible although time is getting tight due to a certain day just being 4 sleeps away.

At 6 am GMT 100 hobbyists and miniature painters will start this year's Analogue Painting Challenge.

Below are a couple of pictures of the calm before the storm. 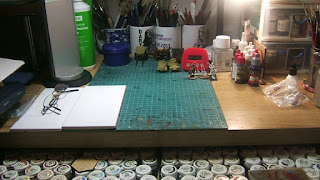 Top centre shows two armoured cars that were never completed in last years challenge, so they will be first up this year. Then on to the vehicles for the 11th Armoured division. All in 20mm this will give a good basis to ensure completing the challenge score and more. 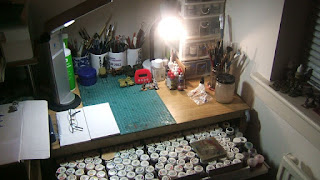 Off now to rest the eyes before the start at some point tomorrow.

As the Painting Challenge fast approaches trying to get a few figures finished before moving on to new themes for the duration of the Challenge.

These three heavily armoured figures have been a bit of a challenge in their own right, especially the figure with the mace. The cloak on this chap has been black, yellow ochre, black, purple, black, bottle green and then black again. After leaving the figure in the corner so to speak have finally decided that black works best with the tones in the armour. Well at least it won't need another base coat this time. 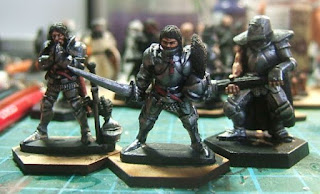 The other two figures from Grenadier had issues with the armour and washes. The blue/black mix wasn't right and after another two coats of Nuln Oil finally seemed to work. Only the hair and plumage to finish and these are for basing.

Layering metallics gives a good result and is very different than straight dry brushing the colours up and picking out highlights. Dry brushing is still champion if there are large amounts of chainmail although this can be picked out with wet brushing if very careful.

Hopeful to get these completed over the next few nights

With only nine days left before the start of this year's Analogue Painting Challenge, the final preparation work has been completed.

Shown here are a variety of different figures that will keep enough variety to complete the point level set and hopefully more. 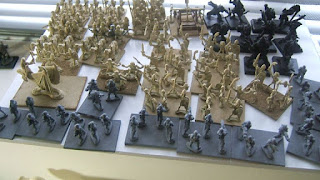 First up are range of different figures including in black Citadel Orcs circa 1985, Critical Mass recom troopers in grey and finally  15mm.co.uk Undead in well bone coloured undercoat. 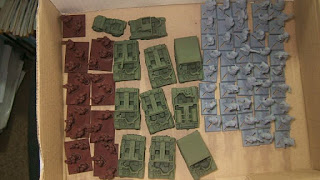 Above shows another three different sets of figures.

First in chaos red under coat, Kaamados Dominion Aagamid Infantry platoon - there are another seven stands drying at present. Next are 11 20mm WWII British vehicles to flesh out the 11th Armoured Division support company. These are from Frontline Wargames. Lastly are the Caesarean Romans from Gripping Beast that will make up the bulk of a Basic Impetus army in 28mm, there are another 16 figures also drying for this range. 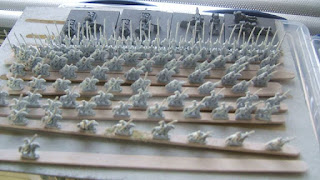 Above are Companions and Greek Heavy cavalry from Rapier Miniatures in 6mm and enough figures for two stands of phalanx.

The last picture below show the Curtgeld figure or in this case figures, from Gripping Beast's Early Saxon range - Penda the Last Saxon King. The main question here is do they get a black, grey or white undercoat? Lately have been moving away from black as finding it harder to see things. Guess its an age thing! 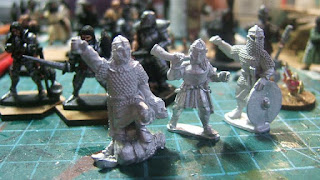 A new Beginning for Basic Impetus 2.0 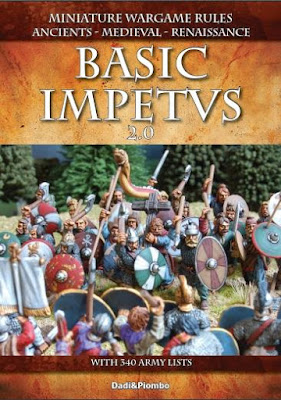 Soon to be available in both print and pdf versions, more details here.

Sometimes the colours that you think that will work well together just don't sit well. The juxtaposition is well just wrong. This is an example of this 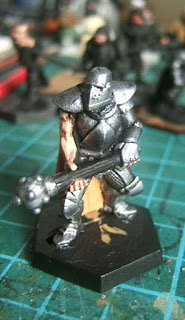 The ochre for the cloak just doesn't sit well with all that polished steel. Any suggestions? Black - too obvious, blue might work, white  could be too clean and red, well that's been done before at some point in history. 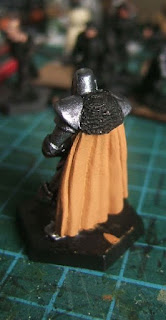 Over to to you for your colour suggestions