With a Rebel Yell 3

Again, rebased and refinished figures this time from the English Civil War to be used as a camp in Baroque. 15mm figures believed to be from Freikorps. 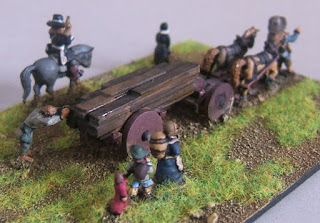 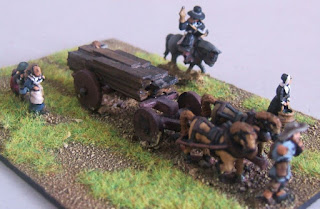 In time there will be another camp for this period from the same batch of figures.

Another two stands of 6mm Hypaspists completed for use in ADG and various other systems.

Each base has fourteen figures on a 20 x 40mm base. The Rapier figures are slightly bigger than their Baccus counterparts which fit sixteen to a stand. All that said the finished look is still good and creates the mass effect that is looked for when multiple stands are put together. 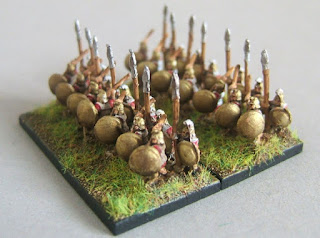 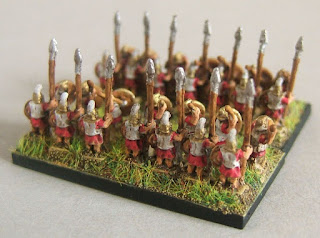 Speaking of which here are all four stands shown together; which gives enough frontage to use them in Impetus or Basic Impetus using 15mm distances.

Working on more skirmishers for this army at present along with light cavalry stands.

There will be some more finished pictures early next month

With a Rebel Yell 2

Here are the first completed stands of the thirty or so infantry stands to have been debased, rebased, washed in Agrax Earth shade and then matt varnished. Twelve are shown below. 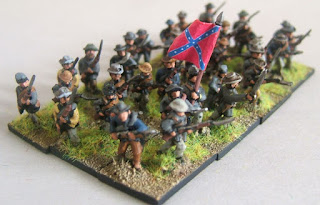 The figures are thought to be Essex Miniatures and although they look particularly dark are very good when assembled en masse. The darker finish will suit some tinkering with the images for those black and white period pics. 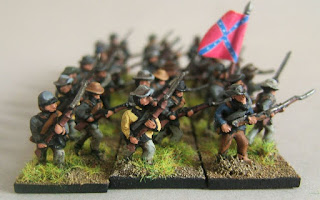 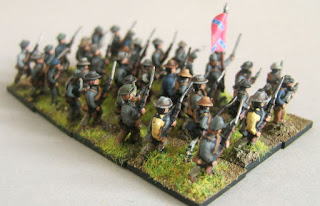 However, more about that in the future.

There will be more infantry and dismounted cavalry to follow shortly.

Reflecting on Plato's words as the wheels of change turn yet again.
Posted by roma912 at 10:30 No comments:

Some more work in progress pics of both 6mm Rapier Miniatures Hypaspists and the ongoing rebasing of 15mm Essex ACW Confederates. 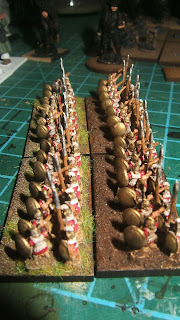 Shown next to their finished comrades in arms to spur them on to greater things in the future; or something like that.

Below is the start of the Greek/Macedonian Light cavalry, with six stands in all. These javelin armed cavalry will scurry the flanks and weak points of the opposition looking for cracks for their heavier big brothers to exploit.

With the infantry all waiting on the final coat of varnish here are the first three stands of artillery; there are six in all at present.

The brick work in the background is from a building for Dead Man's Hand.

That's all for just now, next up will be some finished pictures from Ancients and ACW

With a Rebel Yell

The start of another series of entires for the blog picturing the progress of a 15mm Confederate States of America army for both Battle Cry and Fire and Fury.

This will included a mixture of second hand figures rebased and washed in Agrax Earth Shade before matt varnishing and a number of newly painted and based figures to boost the numbers. Those figures pictured below have been specifically painted for this. 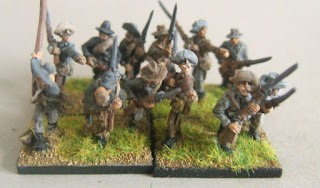 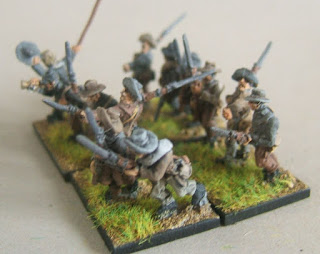 This is a new period and style of painting which is proving at present to be quite slow. The figures are undercoated in light grey, base colours added then washed in Agrax Earth to provide shading before matt varnishing. Overall the figures look good and the effect when more are completed will be more powerful than that of the four stands pictured here. 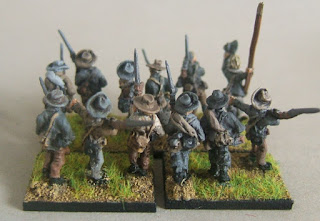 There will be more pictures from this period shortly showing some of the second hand figures rebased and completed for use.

Pictured below are two stands of Rapier Miniatures 6mm Hypaspists for ADG. These are part of a Greco-Macedonian force that is being painted to be used in general for Hoplite and Phalanx warfare in the City States. 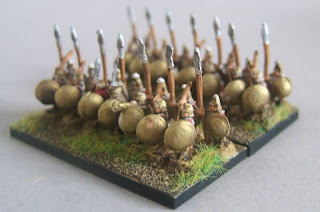 Slowly working out that the best way to paint these very small figures is to remove the need for detail on the individual. This is because the massed effect replaces the detail and creates a sense of scale and depth when multiple stands are placed together. 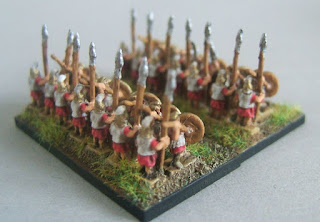 Will post some pictures in the near future that will show what is trying to be described above. 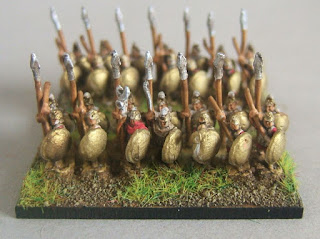 On the work bench there are currently another two stands of Hypaspists and six stands of Light Cavalry in varying stages of un-readiness.

Hopefully there will be some more work in progress and finished pictures shortly.

C Beams Glitter in the Dark

After dropping the Now For Something Completely Different title for fantasy and sci-fi figures and new title for each was needed. After some thought and reflection on possible titles the above has been stolen from Blade Runner's final scenes for the Sci-Fi figures: 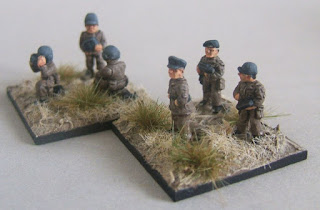 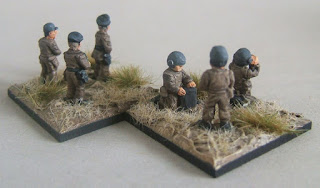