Bilbo said "Don't adventures ever end?" The same is true of some armies and the Late Romans are one of those here as there is always another unit needing painted.

This time it's a stand of light infantry archers that will be used in Later Roman, Patrician Roman, Romano Brits and possibly Arthurian Briton armies for ALDG in 28mm. Along with a few command figures to complete a general's base for ADLG. 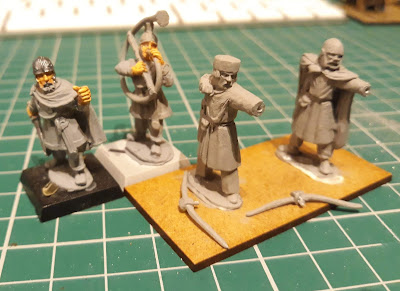 The archers are from Gripping Beast and have these new fangled separate hand thingees whilst the command figures are from Foundry, the smaller sculpts of the two groups.

Looking to make some quick progress on these chaps and integrate the command figures into an existing stand whilst the archers join the ranks of Light Infantry and support figures for DBA and ADLG.

Hope that this was of interest to you?

Great figures , looking forward to seeing them being painted.