Since it's October and the Battle of Hastings was in October here are few Normans of very different sizes. 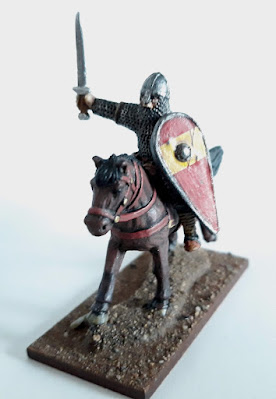 First up, is a Norman Milite from Gripping Beast that has been waiting a few brush strokes to finish him off. Another versatile figure range that can be morphed into El Cid Spanish and 1st Crusaders and early Feudals as well. This figure is part of a Hearthguard unit for SAGA and other skirmish games as well as the possibility of WAB at smaller point games.
Next are two stands of missile troops for a Norman DBA army in 6mn. Crossbows to the left and archers to the right. The base sizes are the sames as would be used for 15mm figures just a few more figures per base. The first units of spearmen are on the painting table just now but most likely to be next month before they are here.

The same versatility will be available with these figures once finished and they'll see a fair bit of use in the future.
This takes this month's tally to:
6 x 28 mm infantry
1 x 28mm cavalry
12 x 6mm infantry figures
Getting there and the 6mm figures are a bit cheeky but still count.
Hope you found this interesting
Cheers for now.