Day four has seen better avtivity with a brush and the first two figures are complete.

Both figures are from Gripping Beast: Normans and Late Crusader ranges.

This figure - depicting William the Conqueror - is done for now and considering it was started ten year ago not rushing to change anything. However, its lacking something so might add a shield and change the colours of the harness to make him more like a leader of cabarellos hidalgo than his northern counter parts. 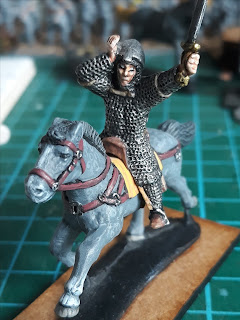 Next is a leader figure for Late Crusaders, in particular the Knights Hospitaller. In 1247 by papal order the Knights Hospitaller were given permission to wear red surcoats emblazened with the cross on in white. This figure with some artistic licence is in between with red and black quartering on the horses barding. Other figures for this warband will have either red or black surcoats depending on status. 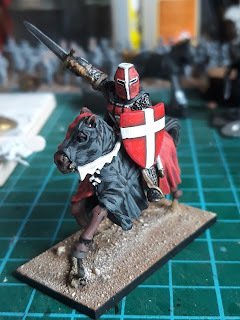 The shield is a Little Big Man transfer.