Haven't been updating on work in progress of late and really should be doing so more often.

This year has seen a major rebasing project start with all the Late Romans and allies being rebased for ADLG.

As expected this has created a few gaps here and there which has resulted in the following. 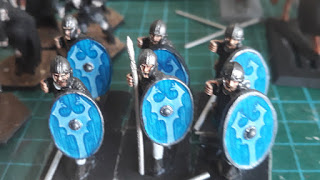 Heavy infantry from Gripping Beast that are so very nearly complete. A bit of work on the trousers and the spears and its off to the basing queque. These six troopers will complete two stands of heavy swordsmen protected that are core units for the Late Romans. 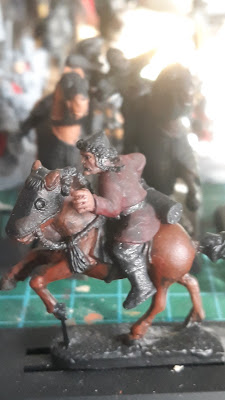 Next up is a Hun horse archer from
Gripping Beast. This figure will complete a stand of light cavalry bow giving five of these once the rebasing is done. Whilst fragile units these are key to the Hun army and will stand as allies in the Late Romans and Goths. 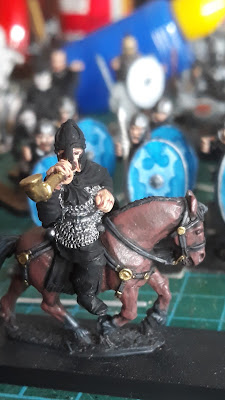 Next, a mounted horn blower from Foundry which ironically have tried to sell on several occassions and failed to do so. This figure will join one of the command stands currently being worked on. 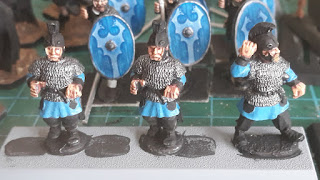 Three more figures from Foundry above that will be used in a similar fashion as the Gripping Beast figures above; to fill the gaps left over in the rebasing. These are well on their way to being ready for basing although there will be a slight delay as the transfers for their shields are on their way. 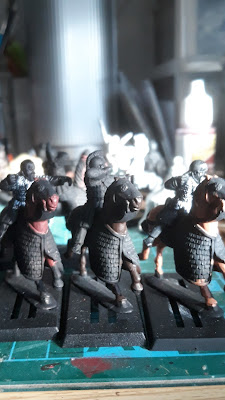 Lastly, a composite unit with riders from Gripping Beast and armoured horses from Footsore Miniatures. These are one of three units of these on the painting table at present.

The finished figures will be shown as part of the IX Analogue Hobbies Painting Challenge later this month.

Thanks Phil, the shields on the Gripping Beast Romans have Little Big Men decals on.

I love the colour of those shields.